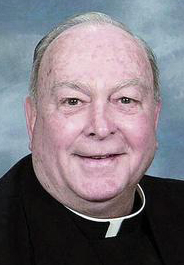 He was ordained May 16, 1964 at the Cathedral of SS. Peter and Paul by Archbishop John Krol and his first assignment was as parochial vicar at Immaculate Conception Parish, Levittown.

His last assignment was as chaplain to the Carmelite Monastery in Philadelphia.

There will be a viewing for Father Gallagher at St. Cecilia Church Philadelphia on Tuesday, May 7, beginning at 9 a.m. followed by his 11 a.m. funeral Mass with Archbishop Charles J. Chaput as the principal celebrant.

Among the concelebrants will be Fathers Robert Lucas, Charles McElroy and Michael Miller, and Father Charles Bonner, who will be the homilist.

Father Gallagher is survived by his sister Kathleen Powers and his cousin Kathleen Gallagher Valenti and nephews, nieces, grandnieces and grandnephews.