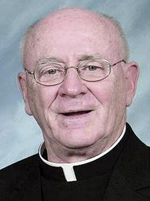 Born in Philadelphia the son of the late James A. McCloskey and the late Julia (Flanagan) McCloskey, he attended Our Lady of Mount Carmel School and Southeast Catholic High School.

As a young man he was active in sports and as a “Two Streeter” — a marcher with the Comics Division in the Mummers Parade.

He had already a year in at Temple University when he announced that he had applied to St. Charles Borromeo Seminary. His family was surprised but excited when he told them he was going to study for the priesthood, and “our mother was especially thrilled,” said his sister, Marie Dougherty. “We came from a great church-going family.”

Meanwhile the war in Vietnam was going on and Father McCloskey had asked to be released to the chaplain service. This was granted in 1969 and he served with distinguished service through many tours of duty including the Middle East on the aircraft carriers Kitty Hawk and Saratoga, rising to the rank of commander.

“Whenever he was home, he would stay with my family,” his sister said. “We were very close, and he took my children on trips all over. He was always there for me. He loved the life of a chaplain and had several medals.”wk And Saratog

“Joe was very capable, very sports minded and very forthright,” said Father Joseph Meehan, who knew Father McCloskey all the way back to seminary days and remained a good friend for more than 50 years to the present.

“He enjoyed his stories from his Navy career,” Father Meehan said. “He loved the Navy and would go back in a heartbeat.”

There will be a viewing for Father McCloskey at Queen of the Universe Church, Ardsley on Wednesday, May 8 beginning at 9 a.m. followed by his 11 a.m. funeral Mass with Bishop John McIntyre as the celebrant. Concelebrants will include Bishop Robert Maginnis, Msgr. James Grant, Msgr. Louis D’Addezio, Msgr. Michael Carroll and Father Meehan, who will be the homilist.

In addition to his sister Marie, Father McCloskey is survived by his nieces Julie Schuck and Marianne Shervin and nephews Jim, Patrick and Joe Dougherty. Father McCloskey was pre-deceased by his brothers, Jack and Jim.

NEXT: Sister Theodore, Franciscan sister for 77 years, dies at 98