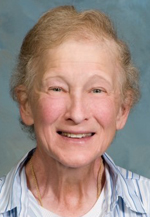 Sister Maureen James Barr, S.S.J., age 64, died April 10 at St. Joseph Villa, Flourtown. She was in the 46th year of her religious life.

In September 1973 she entered the Sisters of St. Joseph, Chestnut Hill, and professed her final vows in 1981.

Sister Maureen ministered in the Archdiocese of Philadelphia and the dioceses of Harrisburg and Wilmington.

The funeral Mass was celebrated April 15.

Sister Maureen was the sister of Rita T. Pepenelli, Jane Barr-Horstman (John), Kathleen B. Wagner (Mark), Patricia B. Russo (Richard), James J. Barr III (Debra), Charles L. Barr (Teri) and the late Elizabeth B. Weber (Thomas). She is also survived by nieces, nephews, one grandniece, one grandnephew and members of her Congregation, the Sisters of St. Joseph.

NEXT: Sister Margaret Kelly, music educator and harpist, dies at 92