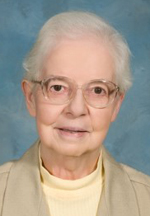 The daughter of the late George and Marie Cooke, Sister Marie attended St. Boniface Grade School and John W. Hallahan High School in Philadelphia. In September 1950 she entered the Sisters of St. Joseph, Chestnut Hill, and professed her final vows in 1958.

Sister Marie ministered in the archdioceses of Philadelphia and Newark, and the Diocese of Paterson.

The funeral Mass was celebrated April 9 at St. Joseph Villa.

She is survived by her sisters, Joan Haney (John), Helen Helkowski (William) and Carol Burgoon. She is also survived by nieces and nephews and by members of her congregation, the Sisters of St. Joseph.

Donations may be made in Sister Marie’s name to St. Joseph Villa, 110 Wissahickon Ave., Flourtown, PA 19031