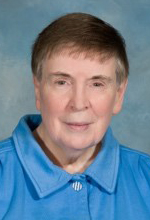 Sister Rose Edward Carlin, S.S.J. (Agnes Marie Carlin), died April 22 at St. Joseph Villa, Flourtown. She was 86 and in the 69th year of her religious life.

The daughter of the late Bernard and Rose Carlin, she attended Holy Name Grade School and Notre Dame Academy in Washington, D.C.

In September 1950 she entered the Sisters of St. Joseph, Chestnut Hill, and professed her final vows in 1958.

The funeral Mass was celebrated April 29.

Sister Rose is predeceased by her sisters Sister Ann Bernard, S.S.J. and Rita Kenny. She is survived by nieces, nephews and members of her congregation, the Sisters of St. Joseph.

Donations may be made in Sister Rose’s name to St. Joseph Villa, 110 Wissahickon Ave., Flourtown, PA 19031.

NEXT: West Phila. native and longtime Daughter of Charity dies at 93