West Phila. native and longtime Daughter of Charity dies at 93 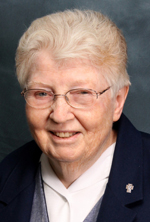 Sister Jane Marie Otterson, D.C., died April 29 at Villa St. Michael in Emmitsburg, Md. She was 93 and a member of the Daughters of Charity of St. Vincent de Paul for 71 years.

She earned her Bachelor of Arts degree in elementary education from St. Joseph College in Emmitsburg, Md., in 1968, and her master’s degree in library science from the Catholic University of America, Washington, D.C., in 1980.

Following initial formation Sister Jane Marie served as a teacher for many years in Catholic schools in Virginia North Carolina, New York, the District of Columbia and Maryland.

She also served in a hospital in Washington, in parishes in Baltimore, Virginia and South Carolina, and at a soup kitchen and hospital in Baltimore. In 2008, Sister Jane Marie was missioned to Emmitsburg, Md., where she assisted the senior sisters at Villa St. Michael and St. Catherine’s Nursing Center. In 2013, Sister Jane Marie joined the Ministry of Prayer at Villa St. Michael where she served until the time of her death.

The funeral Mass was celebrated May 4 at the Basilica of the National Shrine of St. Elizabeth Ann Seton in Emmitsburg. Burial followed at Sacred Heart Cemetery in Emmitsburg.

Sister Jane Marie was preceded in death by her parents; her brothers Daniel, Harry and Patrick Otterson; and her sisters Alice Mullen and Jane McCarthy. She is survived by her niece, Rosanna McCarthy; other nieces and nephews; many friends; and her sisters in community.

Donations in Sister Jane Marie’s memory may be made to the Daughters of Charity Province of St. Louise, 4330 Olive Street Road, St. Louis, MO 63108.

NEXT: Deacon Joseph Niland of Bensalem dies at 86