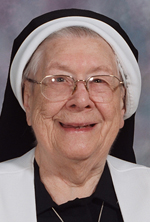 Sister Theodore Klingseisen, O.S.F., died March 12 in Assisi House, Aston. She was 98 and had been a professed member of the Sisters of St. Francis of Philadelphia for 77 years.

Sister Theodore was born in Bavaria, Germany. Prior to her entrance into the congregation, she lived in Lancaster, Pa., where she was a member of St. Joseph Parish and a graduate of Lancaster Catholic High School.

She entered the congregation in 1940 and professed her first vows in 1942. Sister Theodore earned both a B.S. in education and an M.A. in Latin from Villanova University. She also won a scholarship grant to study in Rome. She ministered primarily in elementary and secondary education. In later years she also served in pastoral ministry with the sick.

Sister Theodore ministered for 55 years in the Archdiocese of Philadelphia. She taught at St. Ludwig School, St. Bonaventure School, John W. Hallahan High School and St. Pius X High School. During her years at Neumann University, Sister Theodore served first as dean of students and later in the housekeeping department.

When she retired from her years in education, she served as sacristan at Our Lady of Angels Convent. In 2009 Sister Theodore moved to Assisi House where she served in prayer and hospitality ministry.

The funeral Mass was celebrated March 18 at Assisi House. Burial followed in Our Lady of Angels Cemetery, Aston.

Sister Theodore is survived by nieces, nephews and by her Franciscan family. Donations in her name can be made to the Sisters of St. Francis Foundation, 609 S. Convent Road, Aston, PA 19014.

NEXT: Sister Georgellen, longtime Franciscan sister and teacher, dies at 95