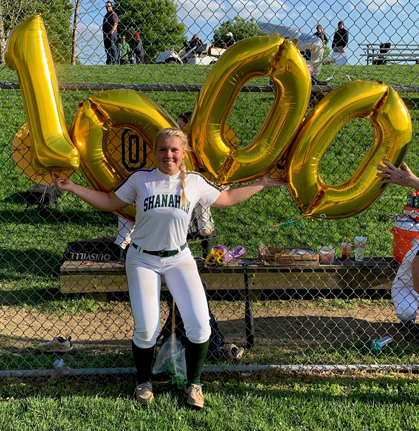 Pitcher Devon Miller of the Bishop Shanahan High School softball team has made school history. The Eagles’ four-year starter recorded the 1,000th strikeout of her high school career during a narrow 12-10 victory over visiting West Chester Henderson on Tuesday, April 30.

“I never thought I would make a varsity school team, let alone break a record and have 1,000 strikeouts,” said Miller. “I’m just really glad to see that all my hard work paid off. If you work hard, good things happen.”

What also made the day so incredible for Miller was that she not only became the first pitcher in Shanahan’s history to exceed the 1,000-strikeout mark but became the second pitcher in the Ches-Mont League to do so.

“To be the first in history is just crazy to me,” said Miller. “I never thought I’d do anything like that. I’m so blessed. I’m so thankful for all of my coaches who pushed me.”

Miller fanned 12 batters on this important day including 10 in the first four innings, bringing her four-year total to 1,010 to that point. She went in to the game with a 998 strikeouts knowing that this was well within her reach. Although that happened, the ultimate outcome that day did not come easy.

The Eagles held a 12-3 advantage going in to the seventh inning but Henderson fought back and scored seven runs in the inning. Despite the threat of a comeback, Miller made one more strikeout on the afternoon to seal the win.

“We definitely did not go in to the inning with the right approach,” she said. “You have to make it interesting sometimes.”

In addition to her success on the mound, Miller also finished 2-for-4 at the plate with two runs scored and two RBIs.

This season, Miller averages 14 strikeouts per game but has registered as many as 20. On Monday, April 22, she struck out nine and gave up two hits in a 5-0 shutout of Unionville. She also made a diving catch and caught a line drive with her bare hands to call it a match.

In a May 3 rematch against Henderson, Miller notched 15 strikeouts and allowed one earned run on three hits as Shanahan ran away with a 7-2 win. Senior Hannah Keiper chipped in an RBI triple in the 11-hit Shanahan attack.

Three days later she outpaced even that performance, striking out 20 batters in a one-hit shut out win over Kennett, the margin of victory coming on a walk -off RBI single from Megan Whitaker that scored Cecilia Grahn.

It has been quite a long road for Miller. Her softball days began at age 6 for her Little League team in the Kennett area. She participated in countless tournaments that have taken her and her parents all over Pennsylvania and to many different states including New Jersey, New York, Florida and Colorado.

Miller initially attended Kennett High School but in search of academic and athletic success, she transferred to Bishop Shanahan in January of her freshman year. It did not take long to put her talents to good use on and off the softball field.

She enjoyed an incredible rookie season, with the Eagles going all the way to the quarterfinal round of the PIAA state tournament. She has had plenty of role models that have helped her along the way from her parents, Todd and Laurie, to her coaches as well as teammates.

Miller’s next challenge will be moving on to Fordham University come the fall semester. She made an early commitment to play softball there back in November 2017. She did reconsider going to Villanova University when the Fordham coach who recruited her left the position, but Miller nevertheless decided to stick with Fordham.

“I saw they hired a good coach. The team will be strong. I’m very excited,” she said.

Academically, Miller plans to study in the university’s School of Business and most likely pursue a major in marketing. One day, she hopes to coach softball at some level as she has already helped guide younger players including members of Shanahan’s junior varsity program.

“That’s just something I really enjoy.” She said.

Her skills on the field and in the classroom might help her realize what has always been a long goal of hers: someday to open a softball or exercise business of her own.

There are at least a thousand good reasons to think she will succeed.

NEXT: Not a doubt: As usual, Nazareth claws back for a big win