Not a doubt: As usual, Nazareth claws back for a big win 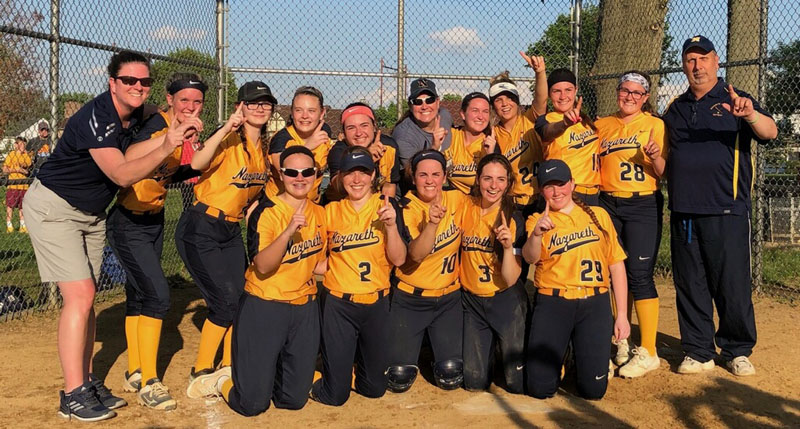 The Nazareth Academy softball team celebrates its first Catholic Academies League championship in five years with a 13-6 victory over Villa Maria Academy on Tuesday, May 7.

Tension had mounted to a crescendo. The score was tied at 4-4 heading into the bottom of the sixth inning, and the winner would be crowned the Catholic Academies League softball champion.

With its home crowd imploring Nazareth Academy to find a way to defeat rival Villa Maria Academy, the Pandas loaded the bases with one out. A walk forced home the lead run. Another walk provided insurance. Five singles later, Nazareth had exploded for nine runs and then held on for a 13-6 victory on Tuesday, May 7.

The title was Nazareth’s first since 2014 and severed Villa Maria’s subsequent four-year streak.

“‘Proud’ is an understatement about how we as a staff feel about this,” said fifth-year Nazareth coach Danielle Vittitow. “These girls have worked so hard for this, even in the offseason. They don’t complain. They just work at getting better, and we have seen so much improvement. They really and truly earned this.”

The CAL champ is determined by the best record in the league. Heading into the pivotal contest, both teams had one loss, with Nazareth’s coming midway through the season, an 8-1 defeat at Villa Maria that left the Pandas in a perplexed state.

Vittitow said for the first time, the Pandas had started to doubt themselves. A 6-0 start to the league season was mentally and emotionally placed in purgatory. If they couldn’t defeat Villa Maria, what was the point?

Along the way, however, Nazareth meticulously gained confidence because of their resilience. The Pandas won six games via comebacks, and two of them occurred on their last at bat, aka “walk-off.”

“It’s weird to say, but that has become almost their comfort zone,” said Vittitow. “They get behind but they have gotten used to it. I, of course, am having a heart attack, but I’m not playing the game. They have learned not to doubt themselves.”

In typical fashion, Nazareth fell behind Villa, 3-0, in the top of the fourth. The Pandas got one back in their half when junior lead-off hitter McKenzie “Mac” Tobler tripled and scored on an errant throw. Then Nazareth pushed home three runs in the fifth, only to have Villa tie the game in the sixth.

Then came a 30-minute stretch that will forever be known as “The Inning.”

“The sixth inning was exhilarating,” said senior Catie Ferry, a four-year starter at third base. “You could feel how much each of us wanted the win and we all banded together to string hit after hit, whether it be in the gap or up the middle.

“Villa Maria is our biggest rival, and we all knew that we could beat them and it was our time to shine. The momentum was huge. Once we got that first runner on base, we knew that it was our inning.”

Senior Natalie Minniti, a starter at first base for four years, was the player who walked with the bases loaded to give the Pandas a 5-4 lead before the floodgates opened.

“All I had in my mindset was to get on base some type of way, so the winning run could score,” said Minniti. “I had strong confidence that I would get on base. It was very tempting to swing, but I trusted my eye coordination to help me succeed and to get on base. Every at bat I always try to be patient, but in that situation I saw how she was a little wild and I took full advantage of it.”

As Nazareth’s lead swelled to immense proportions, senior pitcher Devyn Dydak loved every minute of it. Taking a nine-run lead into the final inning allowed her to simply relax and pitch to contact.

A graduate of St. Charles Borromeo School in Cornwell Heights, Dydak will be attending nearby Holy Family College. While majoring in nursing, she isn’t sure she will try out for softball, though she is leaning toward it. If her career highlight ends up having been on the mound for Nazareth Academy’s first title in five years, that’s fine with her.

“I dreamed of this moment,” said Dydak, who singled home a run in the sixth. “It’s still so unreal that we accomplished this.

“I might not be the best pitcher in the league, but I know I have teammates behind me that have always had my back. There is such a great bond. We have so much trust in the girl next to us. It doesn’t matter if you’re having a bad game, because someone will be picking you up.”

The aforementioned Tobler extolled the Nazareth community for their support.

“Some of the lacrosse girls came to support us, and that meant a lot to us,” said Tobler. “Our principal was there, and some teachers, and some students and friends … it definitely helped.”

Junior second baseman Megan Dignam will particularly remember the post-game victory huddle. It was there that Vittitow informed her and the rest of her teammates that Dignam had been chosen by the Northeast Times as the “Catholic Player of the Year.” Too, Vittitow had been named Catholic Coach of the Year.

As her teammates and coaches embraced her and shouted their approval, Dignam wasn’t sure what was happening.

“I was floored,” she said. “I didn’t expect anything like that at all. Looking around and seeing how everyone was so happy for me made me feel so great.”