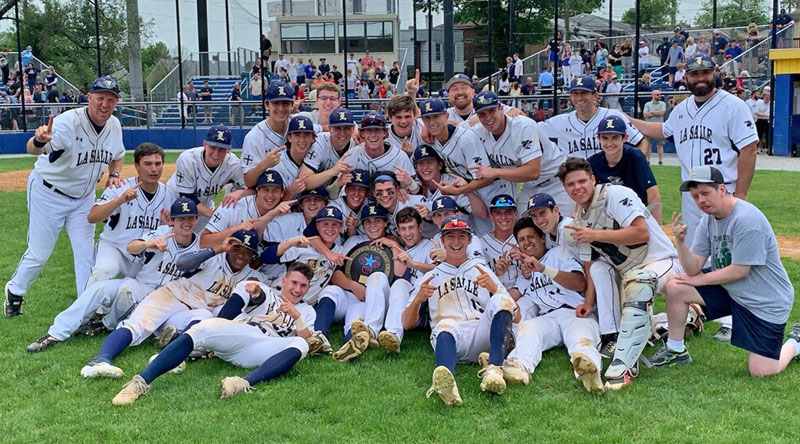 For five innings on a gorgeous Saturday afternoon, La Salle High School junior Sean McCallum sat on the bench cheering. On the field, the Explorers were attempting to successfully defend their Catholic League championship against a Cardinal O’Hara team that refused to submit meekly.

With the Explorers leading 3-0, starting centerfielder Dave Kratz replaced starting pitcher Colin McVeigh on the mound. McCallum excitedly grabbed his glove and sprinted out to center as a defensive replacement.

Then came the seventh, and O’Hara, now trailing by 4-1, had a runner on second and two outs.

“All inning,” said McCallum, “I had been thinking that I wanted to catch the ball for the last out.”

And then it happened.

Without an ounce of drama, the ball landed safely in McCallum’s mitt. The Explorers and their energetic fans – including many 2018 graduates who were mainstays on last year’s title team – went ballistic, serenading Widener University with shouts of joy and relief. 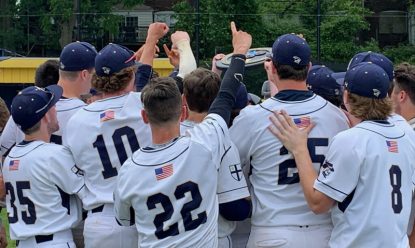 Players gather around the Catholic League championship plaque they earned with a 4-1 win May 25 over Cardinal O’Hara. (John Knebels)

For the third time in the past seven seasons and 10th overall (tying Neumann-Goretti and since-closed North Catholic for the most Catholic League baseball titles with 10; Father Judge is right behind with nine), the Explorers had earned the athletic calendar’s final plaque.

“That feeling was incredible,” said McCallum. “I saw the ball go up in the air and I just thought to myself, that’s all me. That’s the game. That’s the championship.”

As in most, if not all, championships, heroes were in abundance. McVeigh was sensational on the hill. The affable junior tossed five shutout innings and stuck out six, surrendering five hits and one walk. Sophomore Jake Whitlinger – one of the late heroes in La Salle’s 3-2, 13-inning semifinal victory over Father Judge three days earlier – executed a bunt with one out in the second to provide the game’s first run.

Senior Owen Lawn smacked an RBI single in the fifth. Junior pinch hitter Jack Gannon did the same in the sixth. Senior catcher Justin Igoe threw out a runner in the first, played perfectly behind the plate, and scorched a pair of doubles. On both occasions, senior Tommy Meyer was summoned as a courtesy runner, and both times, he crossed the plate.

Senior Andrew Miles, batting in the ninth position, supplied a sacrifice fly, was hit by a pitch, stole two bases and scored on Lawn’s insurance single. He also contributed a very underrated defensive gem to help get the Explorers out of a jam in the third.

Coach Kyle Werman was asked why it’s so difficult to repeat as champions.

“It’s really hard to be dominant in the sport of baseball,” said Werman. “There’s a lot of turnover that happens in high school. Usually, you ride your seniors and when they’re gone, you got a lot of guys who have to figure out the game on the fly.

“So the teams that can get those guys up to speed quicker have a chance to compete.”

The Explorers possessed only one returning starter – Lawn, as a designated hitter. That meant the entire defense was brand new.

After La Salle started the season with a 3-1 loss to Archbishop Carroll, the whispers began. Maybe this wouldn’t be the Explorers’ year. La Salle’s players viewed the situation differently.

“It was definitely a wake-up call,” said senior pitcher Gavin Moretski, the Catholic League’s Most Valuable Player who fired a combined 15 post-season shutout innings against Archbishop Ryan and Father Judge. “It set the tone for the season, saying that it was not going to be easy all year. We are going to have to fight for every win.”

The Explorers embraced the challenge. They blitzed through their next 11 opponents to clinch the regular-season with one game still to go. Wins over eight-seed Ryan, four-seed Judge and three-seed O’Hara annihilated the early gloomy forecast.

But not everyone doubted.

“I’m not at all surprised at where we’re standing right now,” said Werman. 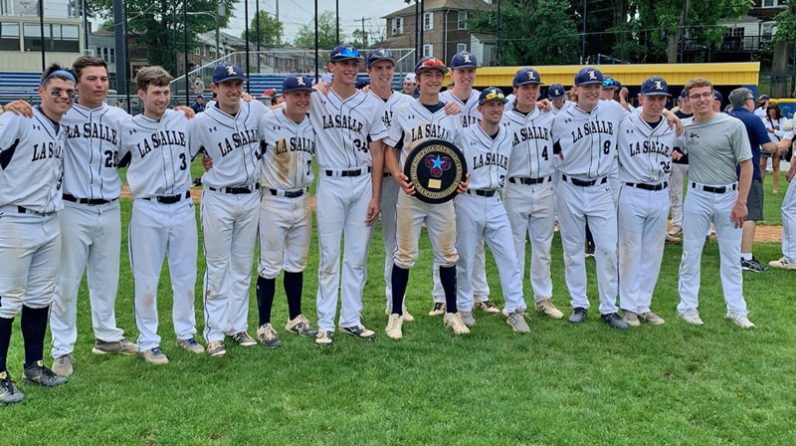 La Salle poses with their Catholic League baseball championship plaque, the third in the past seven years and 10th in school history. (John Knebels)