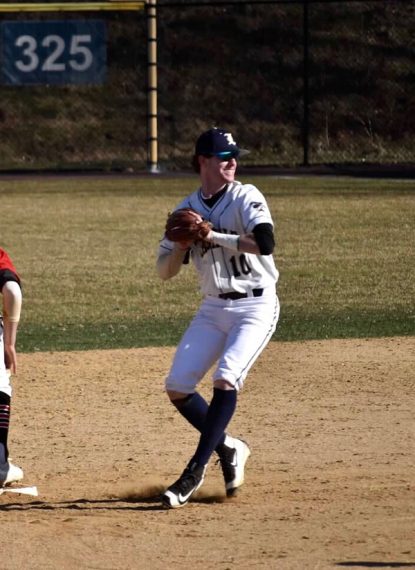 Seen here in an earlier game, La Salle’s Charlie Yanoshik delivered the game-winning hit in the bottom of the 13th to push the Explorers past Father Judge, 3-2, in a Catholic League baseball semifinal game May 20. (Courtesy La Salle High School)

Baseball players see it on the Internet time and again, and they never get sick of re-clicking.

The walk-off hit, a term first coined in 1988 by Hall-of-Fame pitcher Dennis Eckersley, replaced “game-winning hit.” Because circumstances dictate that there is some luck involved even having an opportunity to deliver in the clutch, the “walk-off” is seldom experienced regardless of one’s pedigree.

La Salle High School junior shortstop Charlie Yanoshik, however, has provided the ultimate final dagger on “two or three” occasions, but never on a stage so large.

In the bottom of the 13th inning of a Catholic League semifinal May 22 at South Philadelphia’s FDR Park, Yanoshik slapped a slow roller to shortstop and used his speed to reach first base even before a throw. It scored senior Gavin Moretski from third, propelling La Salle to a 3-2 victory over a devastated Father Judge.

“Those other times were in summer travel ball,” said Yanoshik. “They were cool, but they don’t compare to this. It was definitely a special moment that I’ll never forget. Once I ran through first base and turned to see my whole team running after me, I knew we had won it.”

La Salle, which tied the game at 2-2 in the bottom of the seventh on a sacrifice fly by Yanoshik and a two-out, season-on-the-line single by sophomore Jake Whitlinger, is the Catholic League defending champion and the number-one seed following a spectacular 12-1 regular season.

The Explorers’ hallmark has been standout pitching, of which they received plenty against Father Judge.

Moretski, who had tossed a complete-game shutout over eight-seed Archbishop Ryan in the quarterfinals, took the ball in the fifth with Father Judge already ahead, 2-0.

The Kutztown University-bound ace and Catholic League Most Valuable Player befuddled the four-seed Crusaders. He lasted eight innings and might have gone even longer had he not arrived at the 100-pitch limit. He surrendered six hits and zero walks, and he struck out nine.

Senior Dave Kratz hurled a perfect 13th and was the winning pitcher.

“I felt great through every inning,” said Moretski. “My slider was there early and I used the changeup occasionally, but it worked when it needed to work.”

At noon Saturday, May 25 at Widener University, La Salle will face Cardinal O’Hara. While La Salle was involved in a three-plus-hour marathon, three-seed O’Hara was making short work of two-seed Roman Catholic. 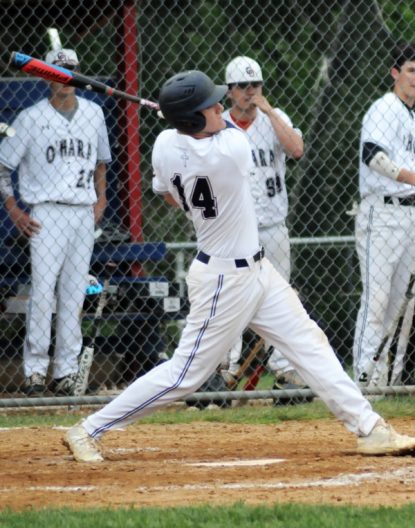 Held at La Salle High School, the Lions scored two in the first and four in the third before breaking it open with five in the sixth. They were able to avoid a seventh inning because of the 10-run mercy rule.

Junior Joe Kelly, one of four Lions to score two runs, said he had full confidence heading into the game despite having lost to Roman, 5-1, earlier this season.

“We all believe in each other to do our job,” said Kelly. “Everyone had a great few practices leading up to the game.”

Kelly is not concerned with La Salle’s 11-8 victory over the host Lions back on April 10. Nor does he worry about La Salle being the defending champion.

“We need to focus on the game Saturday, not what they did last year or the outcome of our game earlier this season,” he said. “It would mean the same amount no matter who we are playing.”

“This game was very important for us just because it really boosted our confidence and we are playing great as a team right now,” said Sperone. “Coming up big to support the team was very big because it took a lot of pressure off some of the other guys and allowed them to play more relaxed.”

PREVIOUS: High drama: Down but never out, St. Hubert’s finds way to win