At St. Agnes, speaker teaches on faith through friendship, meaning of Mass 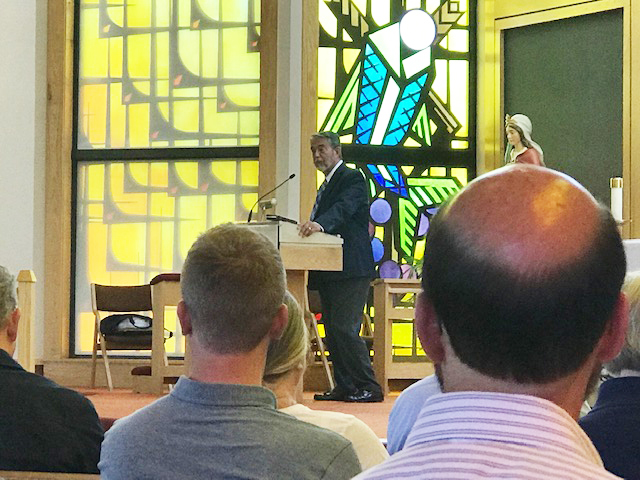 Scott Hahn speaks to an audience of about 350 people June 12 at St. Agnes Church, Sellersville, an event during the parish’s 100th anniversary year.

St. Agnes Parish in Sellersville welcomed Catholic theologian Scott Hahn on Saturday, June 15 for a talk explaining the Mass, evangelization through friendship and how conversion is an ongoing and daily activity for all Catholics.

The event in the parish’s 100th anniversary celebration this year drew about 350 people, representing a mixture of St. Agnes parishioners and other local Catholics. Father Jeffrey M. Stecz, pastor of St. Agnes, began the day by celebrating a morning Mass. Hahn followed with three talks during the day that he illustrated with personal anecdotes from his own life.

In his first talk, “Given for You: The Sacrifice of the Mass,” Hahn explained Christ’s paschal sacrifice on the cross as the fulfillment of the traditional fourth cup used in the celebration of the Jewish Passover meal.

Drawing on his book “The Fourth Cup” published last year, Hahn explained that at Passover there are four cups of wine. The first is known as the blessing cup, which represents the blessing of the festival day and it’s often served with bitter herbs. With the second cup is the reading of the Passover liturgy and involves the singing of Psalm 113. The third cup is served with lamb, unleavened bread and more bitter herbs. The fourth cup, known as the hil-el cup, is the climax of the Passover meal and involves singing Psalms 114-118.

Hahn noted that at the Last Supper, Jesus skips the fourth cup, and then in John 19:30 Jesus takes the wine offered to him on the cross and says, “It is finished.” This act represents the fourth Passover cup, according to Hahn.

“The institution of the Eucharist and the sacrifice on Calvary are not two related events.  They’re the same Passover,” Hahn said. “’It is finished’ means the Passover is finished and that connected the dots for me. Holy Thursday transforms Good Friday into more than an execution.  The sacrifice was initiated on Holy Thursday and consummated on Good Friday.”

Hahn explained how the New Testament illustrates the Mass, and as written in Luke 22:19, Jesus tell us to “do this in memory of me.”

In his second talk, “How to Get the Most Out of Mass,” Hahn said, “Heaven is what’s going on at every Mass.”

He talked about the importance of biblical literacy for lay people. He drew connections between the Old and New Testaments, connecting Jesus as the new Adam, Mary as the new Eve, and how Jesus, like Adam, is tested in a garden.

“Jesus’ death is the gift of life,” Hahn said. “Incarnation fulfills God’s purpose from the beginning.”

Today is the “hour of the lay people,” Hahn said, noting we must share the good news with other people. “Scriptures came to us from the Catholic Church,” he said. “The fullness of God’s family is what he’s calling us into. There’s treasures in the Scriptures.”

After lunch in the St. Agnes social hall and book signings by Hahn, he gave his final talk of the day, “Evangelizing Catholics,” in which he talked about the importance of inviting “all who were baptized back to the fullness of the faith.”

Hahn seemed disheartened as he spoke of the materialism and secularism that has taken over American society. He spoke of the need for Catholics not only to bear witness to their faith but talk of enjoying the Catholic faith.

In his personal reflections, Hahn mentioned growing up in Western Pennsylvania. He has been married to wife Kimberly since 1979, and they have six children, including two sons who are seminarians for the Diocese of Steubenville in Ohio.

A former Presbyterian minister in Virginia who converted to Catholicism, Hahn presently teaches at Franciscan University of Steubenville.

During one of his talks at St. Agnes, Hahn humbly shared that as a teenager, he enjoyed challenging Catholic friends about their faith and encouraged them to embrace a “purer” Christianity. Hahn himself would convert to Catholicism in 1986 and Kimberly did so in 1990.

Hahn concluded his talk discussing the church as a family and emphasizing the importance of fathers. “We are here to form a family,” Hahn said. “This is the Good News. We are children of God.”

Hahn mentioned a new podcast he’s hosting, “The Road to Emmaus,” produced by the St. Paul Center for Biblical Theology, a Catholic non-profit research and educational institute that Hahn founded and of which he is currently the president.

NEXT: Recharge your soul this summer with a retreat