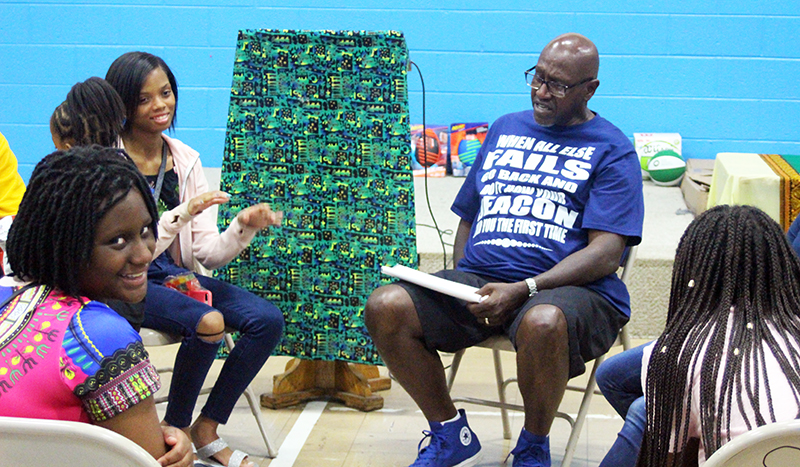 Deacon Anthony Willoughby leads a discussion at “Victory Over Violence,” a June 22 summit for teens hosted by St. Ignatius of Loyola Parish in Philadelphia. Willoughby, the social minister of the parish and the spiritual director of the archdiocesan St. Francis-St. Joseph Homes, urged participants to respond to violence with courage, self-control and compassion. (Photo by Gina Christian)

Amid a recent spike in gun violence throughout the city, a West Philadelphia parish hosted a summit designed to enhance area youth’s conflict resolution skills and self-esteem.

More than 20 teens gathered June 22 at St. Ignatius of Loyola Parish for “Victory Over Violence,” a four-hour workshop that featured presentations, listening sessions and candid discussions about an issue that has hit home, and hard.

According to the Philadelphia Police Department, the city’s homicide rate for 2019 is 10% higher than in 2018, with 158 homicide victims as of June 24, or approximately one per day.

Immediately afterward, Pennsylvania state Sen. Anthony H. Williams wrote to Gov. Tom Wolf, asking him to declare “some form of a state of emergency (or) crisis immediately” to address the gun violence.

The St. Ignatius summit was called in response to one teen’s haunting question during a recent Mass at the parish church, said Blessed Sacrament Sister Stephanie Henry, volunteer coordinator of the parish’s Interfaith Peace and Justice Committee (IPJC).

During the liturgy, Msgr. Federico Britto, St. Ignatius’ parochial administrator and pastor of St. Cyprian Parish in Philadelphia, asked youth to share their insights on forgiveness. A 15-year-old in the congregation was quick to respond.

“This young man asked Msgr. Britto, ‘How can you forgive a person who has killed someone close to you?’” Sister Stephanie recalled.

The teen’s question galvanized St. Ignatius parishioners, who through the IPJC worked with nearby Mt. Olivet Tabernacle Baptist Church and Victory Baptist Church to develop the summit. Organizers sought to create an experience that would provide “both conversation and concrete information” for youth grappling with violence, said Sister Stephanie. 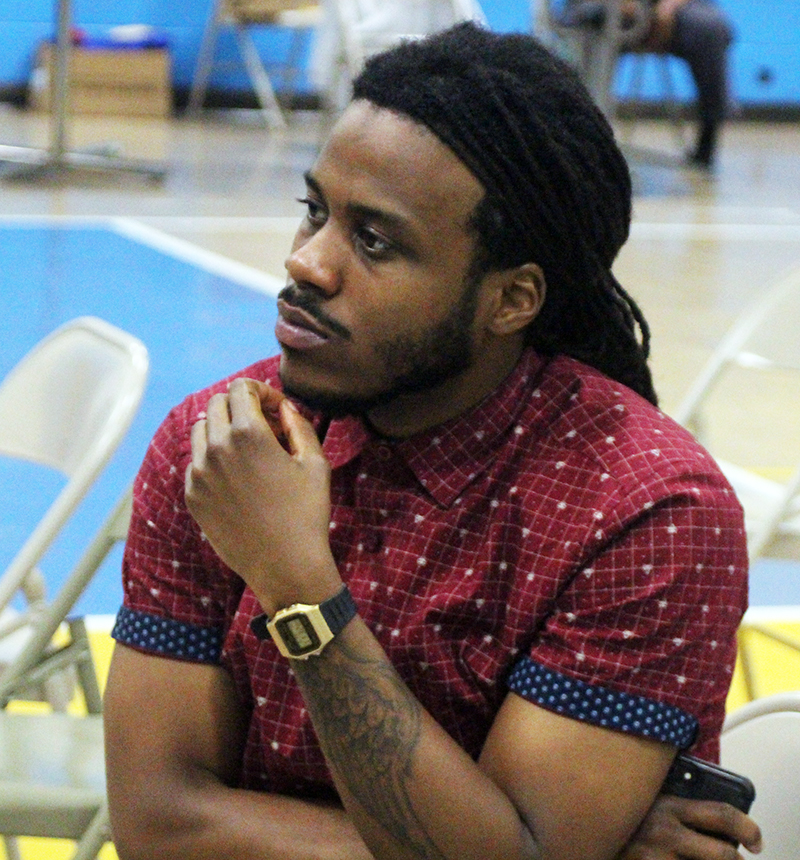 Lorenzo Umstead-Cannon of St. Ignatius of Loyola Parish in Philadelphia listens to a fellow speaker at “Victory Over Violence,” a June 22 teen summit hosted by the parish. Umstead-Cannon, host of a gaming podcast, said his work with youth affirms that social media and peer pressure are key factors in the spread of bullying and violence. (Photo by Gina Christian)

The Mayor’s Office of Education and the West Philadelphia Promise Neighborhood, a federal poverty-reduction initiative, also helped to sponsor the event.

Frantz Pierre Jr., legislative assistant to city councilman Kenyatta Johnson, delivered the session’s keynote address, in which he stressed the need for teens to choose their friends wisely.

“Show me your friends, and I can show you your future,” said Pierre, noting that peer relationships have a profound effect on adolescent development between the ages of 12 and 18.

In his presentation, St. Ignatius parishioner Lorenzo Umstead-Cannon examined the impact of social media on both self-esteem and violence.

Since youth often equate their self-worth with their social media rankings, and since online content can be rapidly and widely shared, digital technologies have enormous potential to incite bullying and violence, he said.

Referencing his work at a West Philadelphia High School after school program, Umstead-Cannon — who also hosts a podcast on gaming — said that he sees firsthand how teens can be manipulated by media.

“They share videos of fights online,” he said. “And I tell them, ‘I know this is commonplace for you, but you’ve got to realize that this is the reason why violence spreads. You’re showing these things to each other, and then other people want in on it, because it’s a certain way for students to get attention.’”

Seated in a circle among participants, Deacon Willoughby asked the teens for the latest slang terms regarding bullying, threats and fights. He added that he engages in the same translation exercise with his students at the St. Francis-St. Joseph and St. Vincent Homes, where he serves as spiritual director.

Operated by archdiocesan Catholic Social Services, the homes offer residential and educational programs, as well as case management and outpatient clinical services, for more than 100 dependent and delinquent teens.

Joking that he used to call one popular social media platform “Snappy, rather than Snap, Chat,” Deacon Willoughby pointed out that “modern bullying has evolved to a whole new level,” one that is more severe than that found in previous generations.

Using a current term for being truthful, he also observed that Jesus himself had been bullied for “keeping it 100,” and then challenged the teens to “be that person to choose victory over violence.”

The message resonated with St. Ignatius parishioner Davina Kennedy, who said she had “automatically felt like the summit connected” to her when it was announced at Mass.

“After being here, I’ve learned that your friends can determine your future, and that you need to know what you’re doing right and wrong,” said 14-year-old Kennedy. “And just let your conscience guide you in what you should do.”

PREVIOUS: Senior fair kicks off summer while gearing up for November elections

NEXT: At St. Agnes, speaker teaches on faith through friendship, meaning of Mass