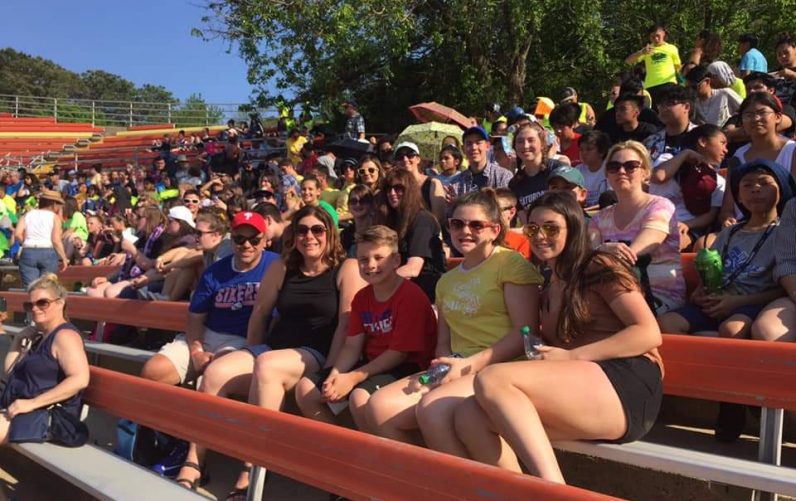 Young people and their chaperones enjoy a day of fun in the sun at Six Flags Great Adventure amusement Park May 19 at the 24th annual New Jersey Catholic Youth Rally.

Approximately 3,000 people from the Archdiocese of Philadelphia and the five dioceses of New Jersey gathered at Six Flags Great Adventure amusement park in Jackson, N.J. May 19 for the 24th annual New Jersey Catholic Youth Rally.

“The day is designed for parish groups, families, schools and more to have an enjoyable adventure,” said Greg Coogan, the Camden Diocese’s director of Youth, Young Adult and Campus Ministries.

The youth rally was born when the New Jersey dioceses “saw a need to pastorally gather and respond to build a culture of community and evangelization. The event has evolved over the years to really focus on good happy, healthy and holy fun.”

The youth rally opened with a prayer service led by the Franciscan Sisters of the Renewal from Atlantic City in collaboration with the Diocese of Camden. The sisters shared their powerful witness and got the crowd up and singing.

For Erica Byram, a senior at Perkiomen Valley High School and part of the youth group at St. Eleanor Parish in Collegeville, her favorite part of the youth rally was “the service in the beginning of the day where the sisters taught us songs. I also loved spending all day at Six Flags with my youth group.” 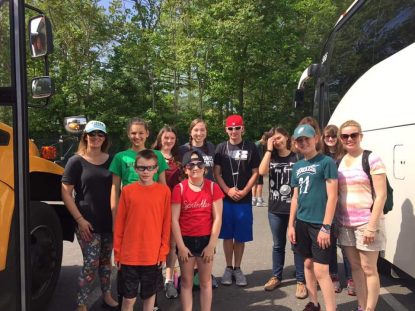 The prayer service was followed by a full day of amusement park fun. The youths and their chaperones enjoyed amusement park rides, enhanced by warm, clear weather and fellowship.

Evening Mass was celebrated by Bishop David O’Connell of the Diocese of Trenton in Six Flag’s Northern Star Arena. The Mass was part of the diocese’s celebration of the Year of Youth.

Although that effort is specific to the Diocese of Trenton, similar fruits could be seen at the youth rally. “Parishes and youth ministries have used this event to help build community and strengthen the ministry’s relationship with teens who don’t necessarily come to a youth group event. Some parishes use this as a ‘thank you’ to celebrate youth choirs, altar servers or other teens who are involved in parish life,” said Coogan.

Catholic/Christian contemporary music artist Matt Maher closed out this year’s youth rally with a free concert. The Grammy Award-nominated artist and winner of the Gospel Music Association’s Dove Award has also performed at the 2013 World Youth Day in Rio de Janeiro, the 2015 World Meeting of Families in Philadelphia and is a frequent performer at the annual Abbey Faith and Music Festival in Paoli.

“The crowd was moved by the quality of the songs and deep praise of our God,” said Coogan.

“One of the great takeaways from this event is that we can come together from various parishes and dioceses to have a day of fun and then pause to worship God together,” said Matt Kirsch, director of St. Eleanor Parish’s Youth Ministry, who first attended the rally as a youth minister in the Diocese of Paterson.

“When I came to the Archdiocese of Philadelphia I was surprised that more groups from around Philadelphia didn’t attend,” said Kirsch. “Some of our parishes are closer to Six Flags than those in far north and far south New Jersey.”

Kirsch now brings the youth group from St. Eleanor’s to the youth rally.

“Some of the teens from St. Eleanor Parish have already marked their calendars for the 2020 event,” he said, noting that the rally typically falls the Sunday after Mother’s Day.

Teens perform an icebreaker activity with Franciscan Sisters of the Renewal at the start of the New Jersey Catholic Youth Rally.

NEXT: Reading to kids makes for a better Father’s Day, every day