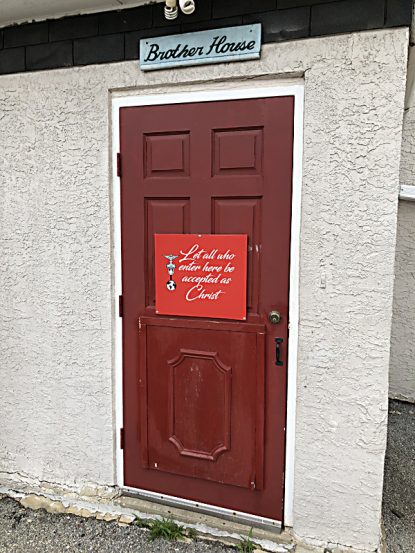 A red door has become a welcome sight to men down on their luck in Norristown, who find at the Brothers House a generous welcome from the Legion of Mary’s brother-volunteers. (Photo by Bob Nowak)

On the corner of Green Street and East Airy in Norristown sits a white building with a rather noticeable red door. Inscribed above the doorway are the words “The Legion of Mary.”

To most who pass by, it may look like just another building in this gritty neighborhood, but every Monday and Thursday the Brother House, as it’s called, is a refuge for the men of the borough in need of care, clothing, food and a place to feel at home — if just for a few hours.

Around the back where the men congregate in wait for the Brother House to open, its slogan is prominently displayed on the door: “Let all who enter here be accepted as Christ.”

The Legion of Mary brothers try to see and serve Christ in every man who comes. Many of the guests, but not all, are homeless, addicts and alcoholics, ex-convicts, immigrants or just poor and going through a hard time in their lives. All races and religions are served equally with dignity, respect and friendship.

This has been the philosophy behind the Brother House since it was first envisioned back in 1968 by Legion of Mary member Bill Peffley. At the time, he and fellow member Don Taggart had discussed the idea of using their building as a social center for men in the area.

Around that same time, during a Legion street evangelization assignment, the pair ran into an acquaintance of Peffley’s who had recently been released from prison. They shared their idea with him and invited him back to see their building. Though unofficial, this was the first visit to Brother House.

The facility was dedicated in 1970 by Bishop Martin Lohmuller and has been serving the Norristown area ever since.

On a recent evening in early June, typical activities at the house began at 6:30 after volunteers Bob, Jim and Jack said a prayer together then let the men into the facility. 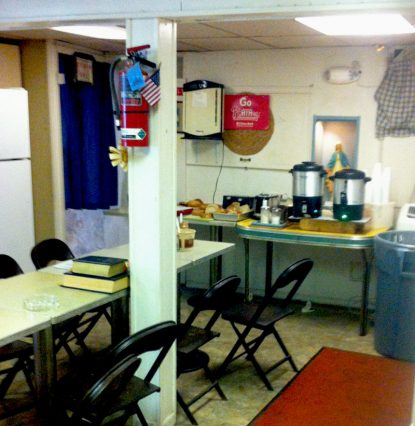 The kitchen of the Brothers House offers coffee, food and a warm welcome, under the gaze of a statue of Mary. (Photo by Bob Nowak)

From there, the flurry of activity never slowed down. Guests signed in at the door then wrote their names on lists if they needed a shower, clothing or both.

The kitchen offered a variety of food, including pastries donated by Panera Bread and coffee, ice tea and fruit brought by the Legion’s brothers. The men who come can fill up their plates and pack some food away for later if they so desire.

Social nights at the house typically draw about 30 men and there’s plenty for them to eat. Twice a month, volunteers from St. Rose of Lima Parish in North Wales come with sandwiches and other goodies for the guests. Occasionally there are also special events like a Thanksgiving dinner served by the charity of a local restaurant or a Super Bowl party.

After the meal names are called from the list at the door and one by one men are directed to the clothing room where Nowak, who has been part of the Legion of Mary for more than 30 years, asks them what clothing they need. Socks, underwear, t-shirts, shirts and pants are the most requested items, but shoes and jackets are available, too. The men gratefully receive what’s available for them.

Most of the men get a chance to shower, but before that there’s always a little time to talk about what is going on in their lives, and the Legion brothers give out Miraculous Medals and pray with the men for special intentions.

One man on this night told of a time in his life not so long ago that he had stopped coming to the Brother House, and his life had taken a difficult turn. Stuck and uncertain what to do, he came back to 510 Green Street and found just what he needed.

“The red door was open and the light was on,” the man said. “I was welcomed back like it was yesterday.”

One grateful guest said, “Thank God for the brothers! We need them.”

In a striking act of humility this night, a man coming for some clothes turned down an extra shirt when offered because he only needed one.

“I don’t need it right now,” he said of the second shirt, “someone else here might.” 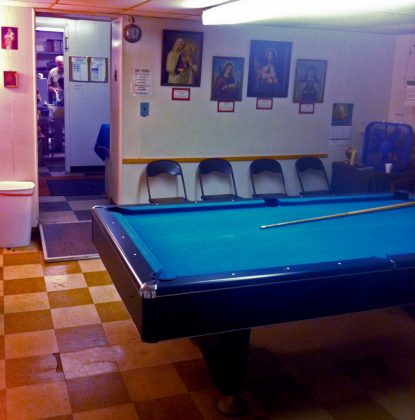 Men can play a game of pool at the brothers House during their respite from the streets of Norristown. (Photo by Bob Nowak)

When these men call one another “brother” it’s not just a throwaway phrase. They truly see themselves as a family at the Brother House. As one man put it, “we all have one thing in common. We have each other.”

And that’s part of the meaning behind the slogan of the Brother House, and the spirit of treating every man like one would treat Christ. Some food and clean clothes, a shower and shave, a haircut, and some time off the street are all temporal benefits of this ministry, but Nowak and the others this small band of brothers who volunteer there know it’s deeper than that.

It’s about reminding everyone of the dignity that no man is truly ever without, but that we often choose not to see. On this rainy night, almost 50 men came to Brother House, and Jack Rogers supervised the kitchen and the 18 showers. Five homeless men were given new blankets.

The night ended with some clean up as well as the recitation of the rosary, which was attended by eight men led by Jim Glennon. While all are invited and encouraged to join the brothers in prayer or write their intentions on a prayer list, no one is ever forced or proselytized.

Between 9:30 and 10 p.m., the men said their goodbyes and headed on their way until the next social. The Legion’s brothers will be there waiting for them, every Monday and Thursday.

The Brother House is funded solely through donations and anyone can help out by supporting it. Money is always welcome, as well as clothing and other essentials like backpacks and ponchos. Some of the biggest needs include sneakers and work boots, jeans and Dickies work pants, backpacks and rain coats.

Of course, the Brother House is just one work of the Legion of Mary, the main goal of which is the personal sanctification of its members.

The other major work of the Norristown praesidium is prison visitation at Phoenix SCI in Collegeville (formerly Graterford state prison).

Learn more about the Brother House on Facebook, reach out to one of the volunteers at LOMBrotherHouse@gmail.com and see information about the Legion of Mary in the Philadelphia region.