St. Gabriel’s keeps marriage all in the (parish) family 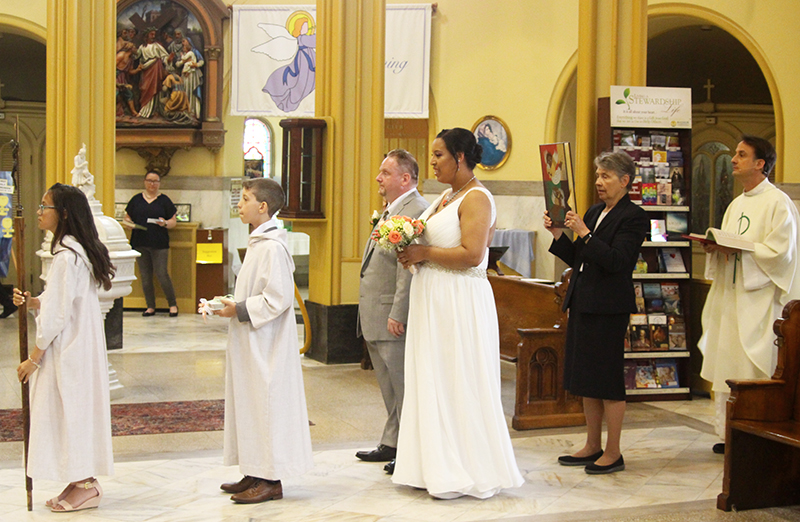 Rashidah Anderson and Roger Frisario join the entrance procession with their son Aidan (second from left) during a May 19 Sunday liturgy at which they were married. The regular Mass, celebrated at St. Gabriel’s Parish in Philadelphia, was an “ideal” context in which to celebrate the sacrament of matrimony, according to Norbertine Father Carl Braschoss, pastor (far right). (Photo by Gina Christian)

A South Philadelphia couple recently tied the knot — and invited their entire parish to attend the wedding.

Rashidah Anderson and Roger Frisario of St. Gabriel Parish in Grays Ferry exchanged vows during the 9 a.m. Sunday Mass on May 19 at the church. The nuptials surprised and delighted parishioners, who were also invited to a reception catered by Frisario in the parish’s garden.

“St. Gabe’s is part of our daily life,” said Frisario. “It’s our family and it’s our faith, and there’s no better way to extend that than to share it with everybody, with the church.”

For Anderson, a recent convert to Catholicism, having the wedding within the context of the Sunday Mass “made everything come full circle.”

“We’ve been through a long road together,” she said. “And to take this next step, side by side with the church and with our community and with our families, was pretty profound.”

The couple’s son Aidan was an altar server at the liturgy, at which Norbertine Father Carl Braschoss, the pastor of St. Gabriel’s, presided.

In his homily, Father Braschoss told the congregation that it simply “made sense to have the wedding” during the scheduled liturgy, and thanked the couple for their witness to the faith and to marital love, saying, “You have blessed our lives.”

Although not typical, celebrating the sacrament of matrimony during a community Mass “has a sound theology,” according to Father Frank Berna, a theologian from La Salle University and a popular wedding celebrant. 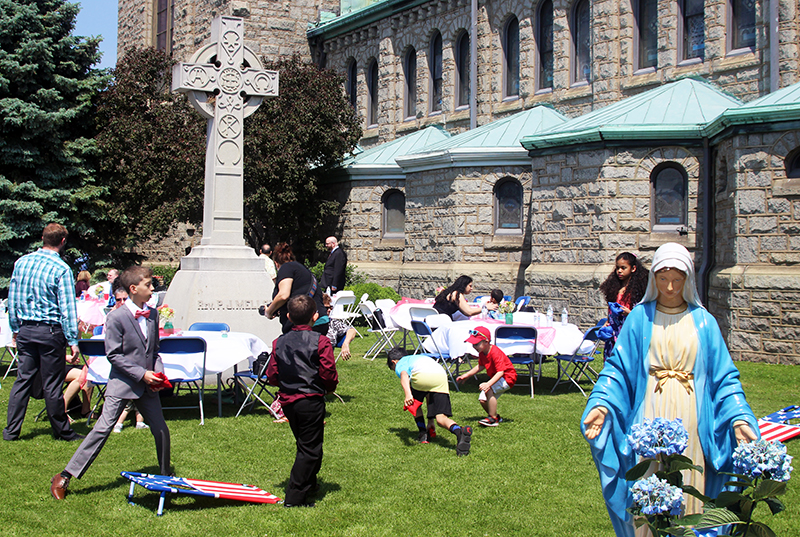 Aidan Anderson (left) plays with children at his parents’ wedding reception May 19 at St. Gabriel in South Philadelphia. Open to the entire parish, the gathering took place immediately after the 9 a.m. Sunday liturgy during which his parents exchanged vows. (Gina Christian)

“All sacraments are acts of the church, not private or family celebrations,” said Father Berna, who directs La Salle’s graduate religion program in theology and ministry.

For that reason, Catholic canon law specifies that weddings should be held in the parish church, Father Berna said. Given the popularity of outdoor and destination weddings, Sunday matrimony can be “one of the ways we can keep marriage as a sacrament in front of the worshiping community.”

Pastoral minister and director of religious education Sister Rose Adams, I.H.M., said the parish had been “working up” to weddings at Sunday Mass by scheduling all of its baptisms during the liturgy.

“This is what the church is looking for,” she said. “I think the church wants all of our sacraments in the context of community, and the Mass, and the gathered people.”

(Related: Listen to a two-part podcast with Father Frank Berna of La Salle University on why marriage is central to the human community as a sacrament of everyday holiness.)

In addition to affirming the value of family and community, marriage at Sunday Mass “provides a fine alternative to the wedding industry,” Father Berna said.

With the average cost of a wedding in the United States ranging from $24,000 to $39,000, financial concerns make Sunday nuptials an attractive option.

Noting that a second couple had married at the May 18 vigil Mass, Father Braschoss called the arrangement “ideal.”

“These couples didn’t want something really big, and they were budget-conscious,” he said.

The experience should not be so frequent as to risk “losing its value,” he said, and the parish community should be informed “at least a week or two in advance.”

The Mass itself should begin promptly, and the entire liturgy should not exceed too far beyond the regular worship time.

Above all, he stressed, it is important “not to lose the celebration of the Sunday Gospel.”

For Anderson and Frisario, the Scripture readings designated for the Fifth Sunday of Easter were a perfect fit.

The second reading, Revelation 21:1-5, described “the holy city, a new Jerusalem, coming down out of heaven from God, prepared as a bride adorned for her husband.”

Frisario said that the Gospel, taken from John 13, was particularly meaningful to him.

“It’s one of my favorite Gospels,” he said. “The Ten Commandments say, ‘Don’t do this, don’t do that,’ and Jesus is saying, ‘Here’s something I’m telling you that you can do: Love one another as I love you.’ And there’s no better way than marriage to express that.”

The Anderson-Frisario wedding also coincided with St. Gabriel’s monthly Mass for former parishioners, who regularly return to celebrate the Eucharist and reconnect with old friends.

“We were grateful for that,” said Father Braschoss. “Community is everything.”

As she surveyed the reception in the parish yard, parishioner Catherine Dougherty agreed.

“That’s the way church should be,” she said.