Without a word of English, he found friends at Christ the King 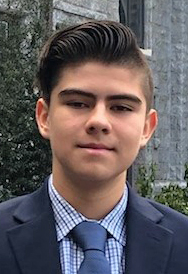 Sebastian Buritica, 15, who just graduated from Christ the King School in Northeast Philadelphia and is now headed for Holy Ghost Prep, had quite a challenge when he first started school.

For one thing, he was just 7 years old and a recent arrival from Bogota, Colombia who hardly spoke or understood a word of English.

There wasn’t any danger of heavy-handed officials from ICE knocking on the door asking what he was doing here. Sebastian was actually born in the United States, in Melrose Park, Illinois, as a matter of fact.

But when he was 2 his mother Ana, who is now a naturalized citizen, took him back to her homeland where he quickly adapted in the loving care of his mother and grandparents — his abuela Ana Lucia and his abuelo Nestor.

It was a warm, happy family complete with loving aunts and other relatives. Sebastian very quickly forgot the very little English he had learned, and Spanish became his native tongue just as much as if he had been born in Bogota.

He even started his education there at a huge private school that went all the way from pre-k through high school. He had lots of friends, especially through sports, something he loved and still loves. Being a Catholic country, Colombia has lots of holidays, both civic and religious. The food was wonderful, life was good.

But there was a dark side too. Colombia, as with most of the countries in adjoining Central America, has an alarming murder rate that is almost five times that of the United States, which isn’t the most peaceful country on earth either.

One memory Sebastian would rather forget is one day when he was with his grandmother and mother eating in a restaurant, a man walked up to a nearby table and shot and killed another diner. “There was a lot of violence,” he remembers, and also “a lot of poverty.”

Meanwhile his mom married Rich Fitzhenry and brought Sebastian back to Philadelphia and enrolled him at Christ the King School in Northeast Philadelphia, where Rich attended as a child.

It was tough on Sebastian at first. He had to learn English, the food was very different — he missed his abuela’s empanadas and his abuelo’s chicken and spaghetti with ketchup — and he missed all his friends.

Unlike his school in Bogota, Christ the King is small enough that almost everybody knows everybody else. Especially patient and helpful to Sebastian were then principal St. Joseph Sister Trudy Helder and his first grade teacher Terry Semon. His mother volunteered at the school for a bit and taught Spanish for a time.

More important, “so many kids came up to me to be friends,” he said. “They accepted me.” And of course, he became very involved in sports including soccer, baseball, basketball and something not every grade school has: swimming.

There was also something Sebastian never saw in Colombia: snow. Now he loves to ski.

He picked Holy Ghost Prep because he was really impressed by the program, and just maybe someday he will be an engineer.

Welcome to America, Sebastian. But then again, we too often forget Central and South America are America too.