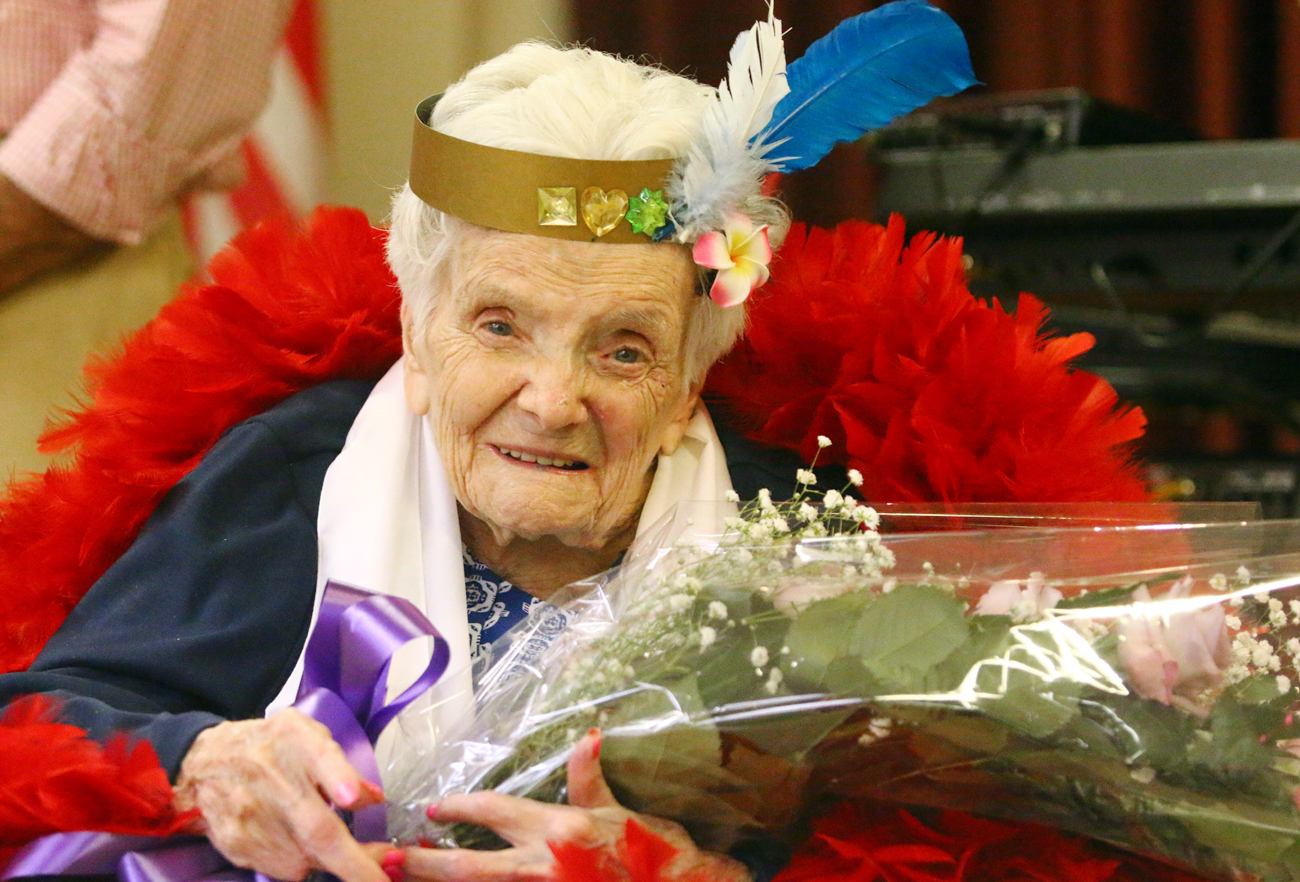 Marion Zimmerman donned a flapper-girl headband before thanking some 80 attendees who had gathered for a Roaring Twenties-themed party that featured live music, dancing and magic performances.

Prior to the party, Zimmerman attended Mass in the chapel at Holy Family. After taking up the offertory gifts, she was visibly moved after receiving a special blessing from celebrant Father James Sullivan, the home’s chaplain.

Little Sister of the Poor Veronica Proffitt presented Zimmerman with a bouquet of roses, commending her for a life marked by devotion and determination.

Addressing the residents of the home, which is operated by the religious congregation, Sister Veronica said that Zimmerman served as a model for others.

“If she can do it, you can do it,” she said. “This little lady has shown us that you can keep getting up and pushing forward until God says, ‘Come home.’”

Born on July 10, 1912 (just weeks after the sinking of the Titanic) in the city’s former Tabor section, Zimmerman worked in the accounting department of Catholic Social Services (CSS) for 19 years.

After an early career as an x-ray technician, she stayed home in Glenside to raise her two children, Toni and Paul Joseph. The next several years were “filled with family doings, involvement in school, community activities, and church,” said daughter Toni, who entered the Sisters of Mercy in 1957.

A member of St. Luke Parish in Glenside, Zimmerman was a regular in the choir, women’s guild and sodality.

Following the death of her husband Paul in 1965, she re-entered the workforce through her post at CSS, from which she retired in 1984.

“That position marked a big turning point in her life after my dad died,” said Sister Toni.

Throughout the birthday bash, Zimmerman frequently said that she’d had “a wonderful time at CSS,” and that her path in life had “all centered on faith.”

Kathleen Bevenour, assistant director of CSS’s community-based services division, thanked Zimmerman for her dedication, adding that it “continues on in the spirit of CSS’s finance department.”

Bevenour presented Zimmerman with framed letters of congratulations and blessing from Archbishop Charles Chaput and from Auxiliary Bishop John McIntyre, who oversees the secretariat for Catholic Human Services.

Franz Fruehwald, chief financial officer for archdiocesan Catholic Human Services, also thanked Zimmerman for her contributions, noting that “there are still people at CSS who remember you fondly.”

One such employee made sure he was on hand to settle a score with his former colleague.

John Doherty, who joined the archdiocese in 1981 as an accountant, worked with Zimmerman for three years until her retirement. During that time, she often prodded the confirmed bachelor to hasten his steps to the altar.

“She always said to me, ‘I’m going to dance at your wedding, John, but you’d better hurry up,’” said Doherty, now the director of finance for CSS’s developmental programs division.

Although still a bachelor, Doherty insisted that he hadn’t disappointed Zimmerman.

NEXT: Archdiocese gets funding for new senior housing in South Phila.