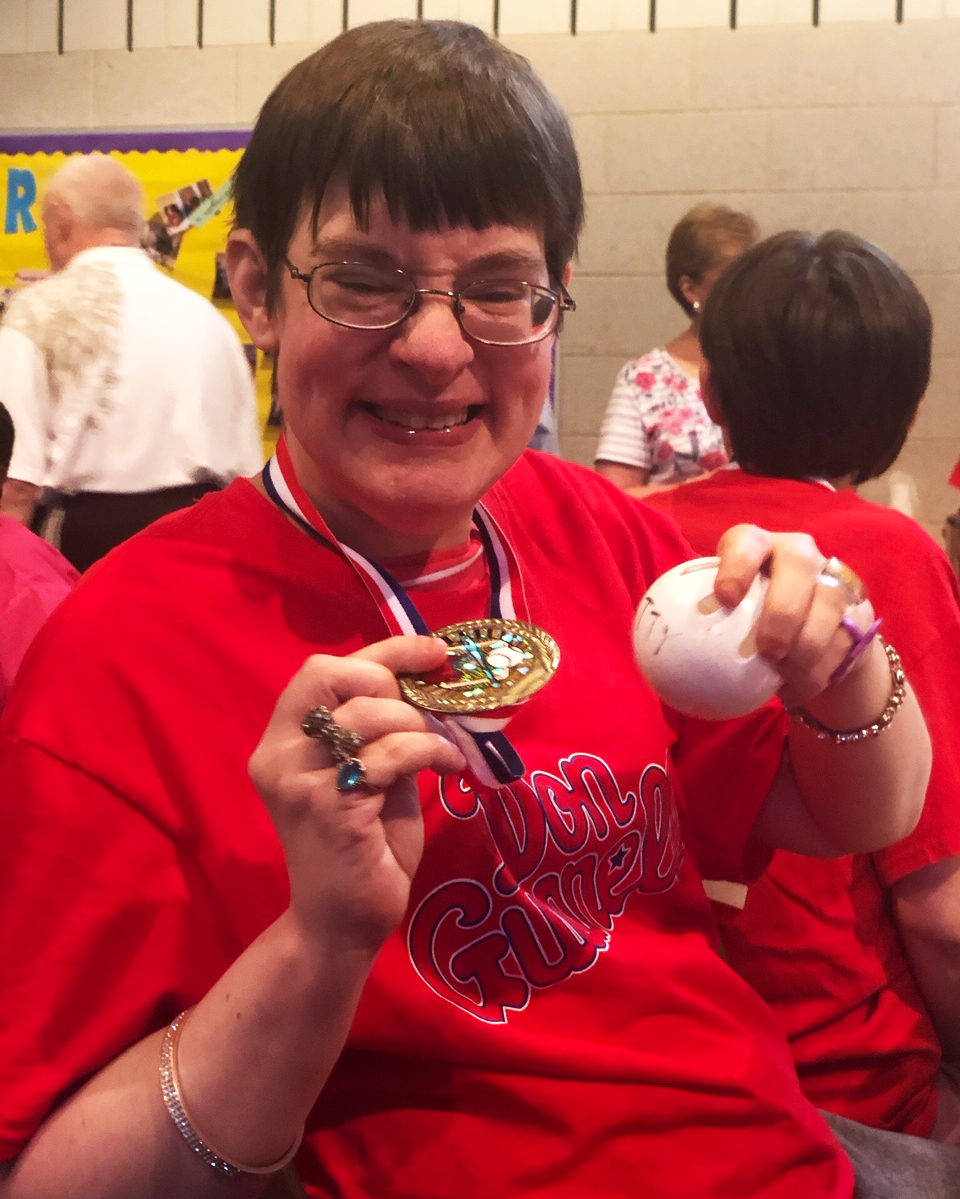 Patty, a member of the Challenger League, displays her commemorative medal at a June 26 awards banquet. Now in its 26th year, the wiffle ball league pairs Cardinal O’Hara students and adults with intellectual disabilities. (Photo courtesy of Kevin Barr)

More than 100 players and volunteers from the Challenger League gathered on June 26 at Divine Providence Village in Springfield for the high-energy celebration. Inspired by the Little League division of the same name, the adaptive baseball program provides individuals with physical and intellectual disabilities with the chance to actively enjoy America’s pastime.

The wiffle ball games are played in the gymnasium of Cardinal O’Hara High School, with the assistance of students from its Community Service Corps (CSC). Led by moderator Charlie Wieners, the teen volunteers escort players to each base and back to home plate as needed. Sideline banter, rowdy cheers, food and fellowship round out the games.

The CSC members devote approximately three hours of their time per week to play wiffle ball with the DGDP team. Students eagerly embrace the commitment, which is separate from any required community service.

Each of the more than 60 players received a commemorative medal at the June 26 banquet, with many of the men and women giving “emotional speeches,” said Kevin Barr, DGDP’s director of corporate and foundation relations.

“The evening was filled with a true spirit of joy and gratitude,” said Barr.

More than a dozen CSC members were recognized for their contributions to the league.

Students Lily Bernard and Jack Gallagher received the Spirit of Don Guanella Award for “demonstrating the spirit and commitment to help others by putting their faith into action through service,” said Barr.

As part of the honor, each student enjoyed a one-year, $500 tuition grant made possible by Jim and Tina Gula, the founders and primary supporters of the Challenger League.

Twenty-five years ago, the Gulas were trying to identify a service project for their daughter’s confirmation studies.

While organizing the project, Jim Gula reached out to a longtime classmate — Father Dennis Weber, S.C., the director of ministry and mission at DGDP. Both had attended Monsignor Bonner High School, where Gula was a baseball hall-of-famer.

Father Weber appointed Gula as a volunteer coach at what was then Don Guanella Village, which eventually merged with the Divine Providence Village for girls and young women.

Over the following three decades, several hundred of the Gulas’ friends and colleagues came to volunteer with the project.

And while the competition can be fierce, the score is measured in smiles rather than stats, according to Barr.

“The men and women of DGDP truly love being part of the Challenger League,” he said, adding that the season ended with “many heartfelt hugs.”