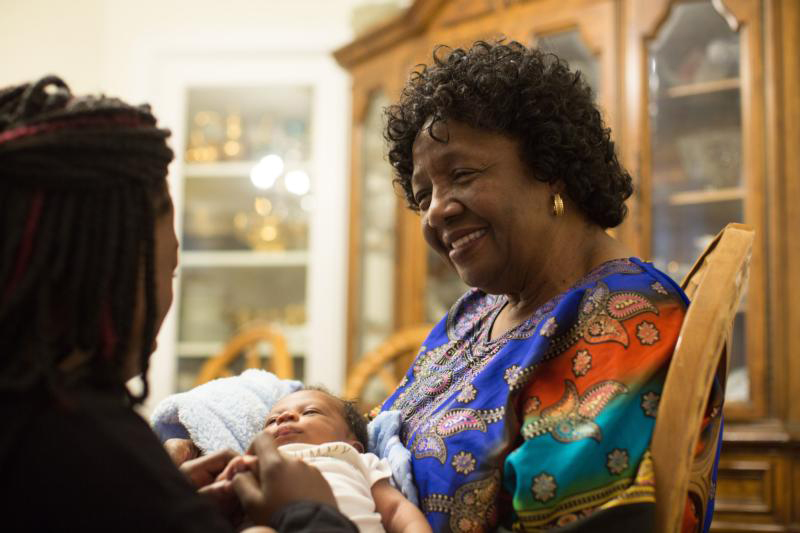 Sharonell Fulton, a foster parent in Philadelphia, is pictured with a young woman and child in a May 23, 2018, photo. Fulton joined in a lawsuit challenging the city of Philadelphia for barring Catholic Social Services of the Philadelphia Archdiocese from placing children in foster families. The Catholic agency supports traditional marriage and does not place children with same-sex couples. The case is being appealed to the U.S. Supreme Court. (CNS photo/courtesy Becket Religious Liberty for All)

PHILADELPHIA (CNA) — Two foster mothers are asking the U.S. Supreme Court to protect the right of a Catholic foster care agency in Philadelphia to contract with the city without being required to place children with same-sex couples.

“As the City of Philadelphia attempts to shamelessly score political points, dozens of beds remain empty and children are suffering the consequences,” said Lori Windham, senior counsel at Becket, which is representing the mothers and the agency, Catholic Social Services of the Archdiocese of Philadelphia.

“It’s time for the Supreme Court to weigh in and allow faith-based agencies to continue doing what they do best: giving vulnerable children loving homes.”

Sharonell Fulton, one of the plaintiffs in the case, has fostered more than 40 children through Catholic Social Services.

“As a single mom and woman of color, I’ve known a thing or two about discrimination over the years. But I have never known vindictive religious discrimination like this, and I feel the fresh sting of bias watching my faith publicly derided by Philadelphia’s politicians,” she wrote in an op-ed for the Philadelphia Inquirer last year.

Toni Simms-Busch, the other foster mother in the case, said in a statement that she valued the freedom of choosing the foster agency that she felt best suited her needs.

“As a social worker I evaluated the quality of care provided by all of the foster agencies in Philadelphia. When I decided to become a foster parent myself, I chose to go through the agency that I trusted the most,” she said.

“The consistency, integrity, and compassion of Catholic Social Services has made all the difference in my journey through the foster care process.”

In March 2018, the City of Philadelphia announced that it was experiencing a shortage of foster families, in part due to the opioid crisis, and put out a call for 300 new families to help accept children.

A few days later, the city announced that it would no longer refer foster children to agencies that would not place them with same-sex couples.

One of those agencies was Catholic Social Services (CSS), an entity of the Philadelphia Archdiocese that has been working with foster children since its founding in 1917. CSS serves about 120 foster children in about 100 homes at any one time.

City officials cited the group’s unwillingness to place foster children with same-sex couples due to its religious beliefs on traditional marriage, even though lawyers for CSS argued that no same-sex couple had ever approached the agency asking for certification to accept foster children.

CSS filed a lawsuit seeking a renewal of its contract, arguing that the city’s decision violated their religious freedom under the constitution.

A judge for the U.S. District Court for the Eastern District of Pennsylvania ruled against CSS in a July 2018 decision.

The U.S. Court of Appeals for the Third Circuit ruled against CSS on April 22.

“The City’s nondiscrimination policy is a neutral, generally applicable law, and the religious views of CSS do not entitle it to an exception from that policy,” Circuit Judge Thomas Ambro concluded.

Catholic Social Services has never been the subject of discrimination complaints by same-sex couples. The agency says that it assists all children in need, regardless of a child’s race, color, sex, religion, sexual orientation or gender identity.

Despite this, Ambro concluded that the City of Philadelphia “stands on firm ground in requiring its contractors to abide by its non-discrimination policies when administering public services,” and that the record demonstrates, in his view, the “City’s good faith in its effort to enforce its laws against discrimination” rather than an anti-religious bias.

The U.S. Supreme Court in August 2018 declined to grant an injunction that would require the city to continue its foster-care placement with the agency during litigation over the matter.

In recent years, faith-based child welfare providers in multiple states including in Massachusetts, Illinois, California and the District of Columbia have also been forced to shut down their adoption and foster care services because of beliefs that children should be placed with a married mother and father.

NEXT: Care for the caregivers: New ministry helps those who aid elders