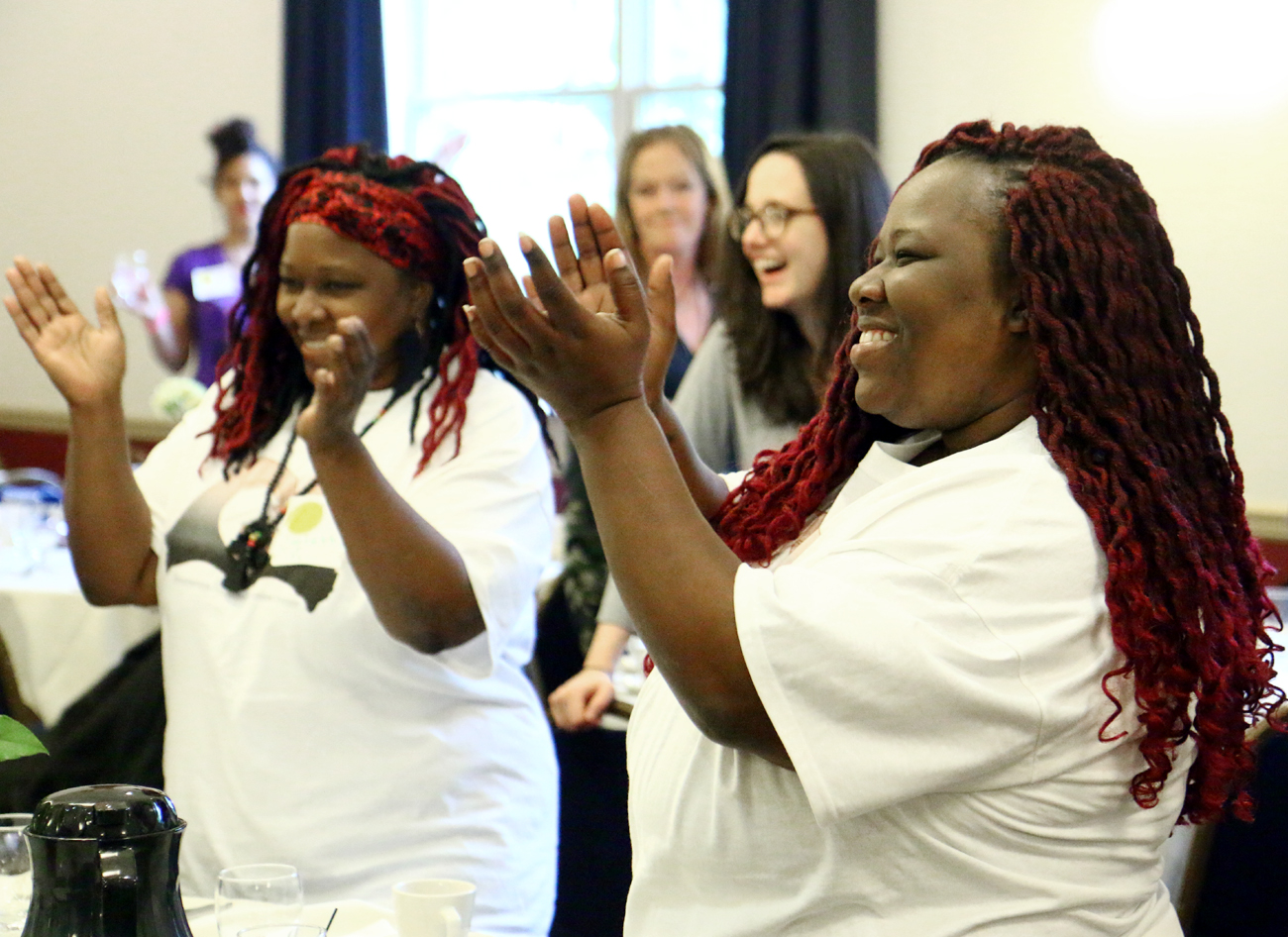 Attendees at a May 2019 retreat for homeless and at-risk adults participate in a praise and worship session after a conference presentation. Hosted by Malvern Retreat House, the gathering is organized each year by archdiocesan Catholic Social Services to address the pastoral and spiritual needs of vulnerable clients. (Photo by Sarah Webb)

Hosted by the Malvern Retreat House from May 13 through 16, the women’s and men’s gatherings blended prayer, praise and presentations that affirmed participants’ identity as creatures made in the divine image.

Malvern Retreat House fully funds the retreats, now in their ninth year for the men’s group and the sixth for the women’s. The center also covers the cost of charter bus transportation to and from the gatherings. CSS structures the retreat program, arranging for speakers, gift bags and on-site staff, who attend the retreats side by side with clients.

Throughout the sessions, the challenges faced by attendees – including struggles with addiction, finances, unemployment, relationships and law enforcement – were addressed by retreat speakers with compassion and encouragement.

“You are not your sins,” said Father Douglas McKay, the founder of Our House Ministries, a recovery outreach based in the Grays Ferry section of Philadelphia.

During his talk on the first day of the men’s retreat – which focused on rediscovering the true self — Father McKay spoke at length about the spiritual battle that underlies addiction, drawing on his four decades of pastoral care to those grappling with substance abuse.

Christ “suffers in us” when an individual becomes enslaved by addiction, said Father McKay, but God’s unconditional love can restore shattered lives and broken spirits.

Father McKay also shared his early struggles with alcohol and street life, as well as his experience of forgiving an attacker who violently assaulted him during a robbery attempt at a local parish.

“In the end, we saw one another as brothers, and we embraced and left as friends. That’s God,” he said. “The Lord lets you go through all this so you can emerge and know him.”

In his presentation to the women’s group, Father Chris Walsh said that true awareness of God starts with the realization that he acts in the present moment, through unlikely circumstances and individuals.

Defining a saint as “someone God shines through,” Father Walsh – the pastor of St. Raymond of Penafort in Philadelphia – surveyed the life of Dorothy Day, an American journalist and Catholic social activist who has been designated a Servant of God by the Catholic Church.

As a co-founder of the Catholic Worker Movement, Day promoted social justice, nonviolence and practical assistance to the marginalized. Yet her own journey to the Catholic faith had been marked by detours through atheistic and communist circles, and through failed relationships that led to an abortion and to the birth of a daughter out of wedlock.

Last May, Day had been named patron of the women’s retreat group by the Malvern staff, giving this year’s attendees a modern example of a life transformed by faith and sacramental grace.

“The saints are not just plastic figurines, but people who lived real lives,” said Father Walsh.

CSS staffer Cindy Volkert called Day a “warrior” who courageously fought for the poor and the hungry well into her advanced years.

“Her life didn’t end at age 70,” said Volkert, noting that the writings and witness of Day, who died in 1980 at age 83, remain relevant today.

Speaker Araminta Brown said that learning from past mistakes and moving beyond unhealthy decisions in life required a commitment to “do the unexpected,” as Day herself had done.

Brown, who completed her college education and then earned an M.B.A. while a single mother, urged her listeners to “dream from this day forward.” 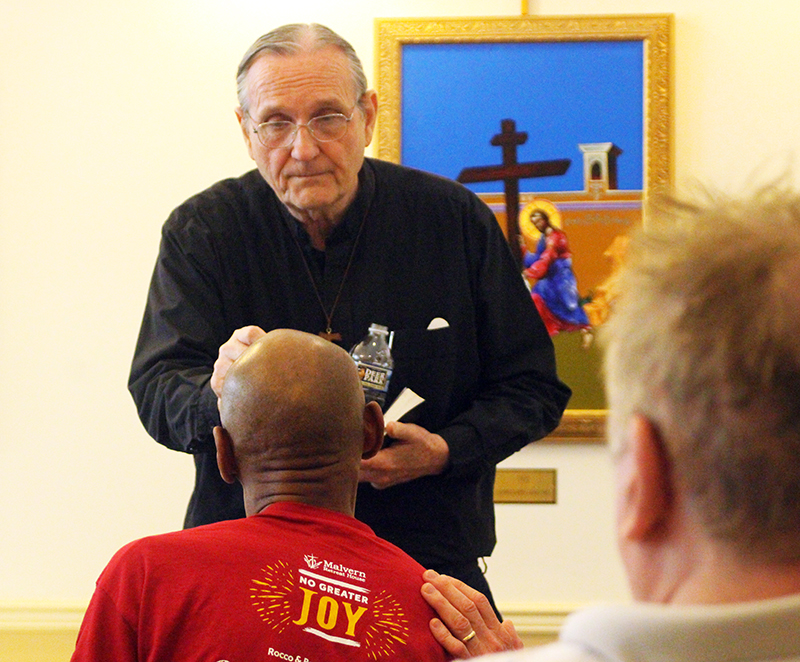 Father Douglas McKay of Our House Ministries, an addiction recovery outreach in Philadelphia, prays over an attendee during a May 2019 retreat for homeless and at-risk adults. Hosted by Malvern Retreat Center, the event is organized each year by archdiocesan Catholic Social Services to meet clients’ pastoral and spiritual needs. (Gina Christian)

Before leading retreatants in a litany of thankfulness, Krajewski called gratitude a “secret weapon that every woman must learn to use.”

The retreat’s messages of hope and healing resonated with attendees.

“Dorothy Day shows how possible change is,” said Kathy Diering, a coordinator of Our House Ministries, which brought a group of five participants to the retreat. “You could see God tugging at her heart.”

Samantha Bradley, a member of the Our House group, added that the flaws of current and would-be saints actually work to draw others more closely to God.

“They were sinners, just like us, and for that reason they’re relatable,” said Bradley.

The retreat also inspired CSS staff, about 10 of whom participated between the two sessions.

“There’s interplay and interaction among each other here,” said David Stier, director of St. John’s Hospice, a CSS emergency shelter that serves approximately 40 men through meals, clothing, support and spiritual outreach. “They’re informing me about our ministry at St. John’s Hospice, what we’re doing, what we might be called to do.”

“This isn’t about doing for somebody who is less fortunate than you are; it’s about being with them,” said Stoner. “Everyone here is so perfectly imperfect, and this is the church at her best.”