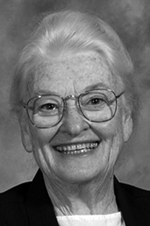 Sister Marie Monica Borden, O.S.F., died May 22 in her home in Pendleton, Oregon at age 84. She had been a professed member of the Sisters of St. Francis of Philadelphia for 60 years.

She was born in Yakima, Washington and at the time of her entrance into the congregation in 1957 was a member of St. Frances Cabrini Parish in Benton City, Washington. She professed her first vows in 1959.

Sister Monica’s work in religious formation took her to the congregation’s motherhouse in Aston; to Rio Piedras, Puerto Rico; and to Our Lady of Angels Provincial House in Portland. Additional ministry in the Diocese of Portland include serving as principal at St. John XXIII School.

She ministered mostly in the dioceses of Spokane, Baker, San Diego, San Bernardino and Cheyenne.
The funeral Mass was celebrated June 4 at St. Mary’s Catholic Church in Pendleton, Oregon, with burial following at Olney Cemetery in Pendleton.

Sister Monica is survived by her sisters, Catherine Finley, Agnes Daucey and Theresa Borden, by her nieces and nephews and by her Franciscan family.

NEXT: Franciscan sister, ministering for 62 years in hospitals, dies at 90