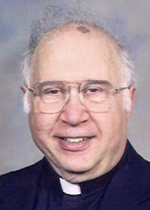 Father Amalfitano then served as pastor of Our Lady of Pompei, Philadelphia and in 1990 he was appointed pastor of Immaculate Conception, where he remained for 23 years until his 2013 retirement after its merger with St. John Fisher in Boothwyn.

“I knew him from the merger of the parishes,” said St. John Fisher’s pastor, Father Robert McDermott. “Father Joe was known by the parishioners for his warmth and his joyful priestly manner. He had a great following and led many pilgrimages to Medjugorje. He was especially known for his healing ministry to the sick.”

Nick DiMarino, who served as part-time business manager for Immaculate Conception, well remembers that hearing ministry. “People would come from all over and he would pray over them,” he said. “It was unbelievable the number of people who would come to the door to ask for spiritual guidance. He was a good, holy man.”

Another parishioner, Philip Rybak, who was Grand Knight for the local Knights of Columbus council, recalls how wonderful Father Amalfitano was with children. “At Christmas he would have a birthday party for Jesus with the kids; that was the sweetest thing,” he said.

At St. Madeline Church in Ridley Park where Father Amalfitano was born and where his funeral Mass will be, in the upcoming parish bulletin Father John Flanagan has written: “Fr. Joe was a good priest. He was so faithful to his daily prayers, Mass and also to texting his friends and followers to say hello, to cheer them up or for a prayer of healing.

“He was very devoted to the Blessed Mother and traveled to the ‘apparitions’ of Medjugorje over 40 times. His last pilgrimage was just last summer. From that trip, Fr. Joe gave me a gift of a white priest stole with a picture of the Blessed Mother. He told me that Mary had blessed it during one of her apparitions.

“His fervent devotion to Jesus in the Holy Eucharist was the food that sustained him for 84 years and 56 as a priest. We were fortunate and blessed to have him retire here for 5 years.”

Caroline Jameison, who knew Father Amalfitano for the past 15 years first as her pastor, remembers him as good priest and a good homilist, but most of all for his healing ministry. “It was so inspiring to see how he helped people,” she said.

Jameison recalls on one of his pilgrimages to Medjugorje, one of the visionaries who was married was having difficulty in conceiving a child. Father Amalfitano prayed over her and shortly after she did conceive.

It sounds like the Blessed Virgin may have been appearing to the visionary, but she was listening to Father Amalfitano. In another instance a man with cerebral palsy had a great easing of his symptoms after Father Amalfitano prayed over him, Jameison said.

Msgr. Ralph Chieffo, whose home parish was Immaculate Conception, first encountered Father Amalfitano during home visits while he was a seminiarian at St. Charles Seminary, and had kept a friendship ever since.

“He was a wonderful devotional man,” Msgr. Chieffo said. “He was gentle soul; it was like Cardinal Newman said, ‘heart to heart.’ Even in his last few months in a nursing home, he was still hearing confessions.”

There will be a viewing for Father Amalfitano at St. Madeline Church, Ridley Park on Tuesday, July 30 from 5 to 7 p.m. There will also be a viewing on Wednesday, July 31 beginning at 9 a.m. followed by his 11 a.m. funeral Mass celebrated by Bishop Michael J. Fitzgerald.

Among the concelebrants will be Msgr. Chieffo, Father John Kelly, Father McDermott, Father Michael Gerlach, Father Francis Sariego, O.F.M Cap. and Father Flanagan, who will be the homilist.

Father Amalfitano is survived by his brothers, Michael, David and Henry Amalfitano and their families.

Interment will be at Immaculate Heart of Mary Cemetery, Linwood.