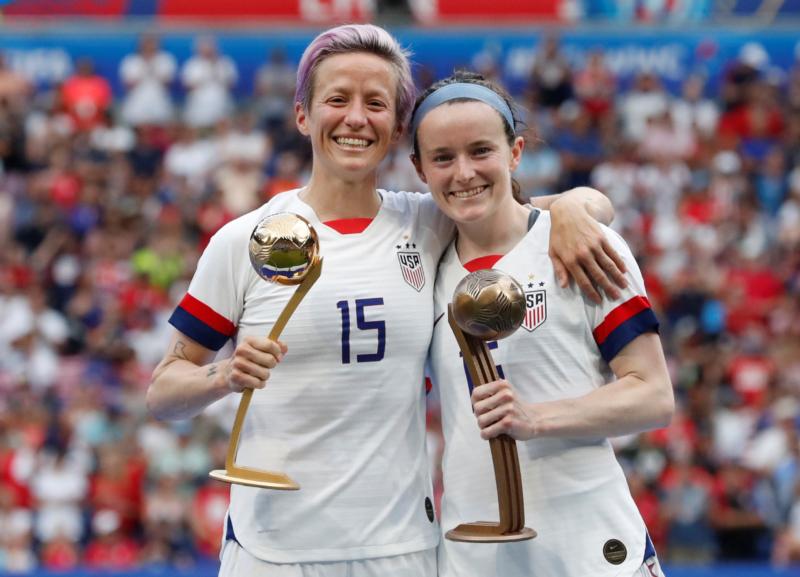 WASHINGTON (CNS) — Rose Lavelle skyrocketed from a star player, loping across the soccer fields at her Catholic girls high school in Cincinnati, to a superstar, scoring three goals for the U.S. women’s team at the World Cup and winning the Bronze Ball as the third-best player in the tournament.

Her high school, Mount Notre Dame, spent the days before the final excitedly cheering her on via Twitter, and it hosted a school-wide viewing party for the 2013 alumna’s game against Thailand June 11. They tweeted in support before the semifinal July 2 against England: “Good Luck to @roselavelle ’13 and the Team USA today in the World Cup semifinals! #GoRose.”

On July 7, the U.S. won its record fourth FIFA Women’s World Cup title and second in a row, beating the Netherlands 2-0 in Lyon, France. LaVelle scored the second goal.

Even as a young high schooler, Lavelle was dazzling on the field, according to Cincinnati.com. Mount Notre Dame celebrated Lavelle’s high school athletic accomplishments, including her four-year varsity performance, during which she earned First Team Honors, All-State player, and Cincinnati Enquirer Player her senior year.

But her passion for soccer dates back even earlier to her elementary school days. St. Vincent Ferrer School posted this along with a photo of a young Lavelle dressed as former superstar Mia Hamm:

“Once upon a time, this little girl dressed up as her hero, Mia Hamm, for a book sharing project. Today, this amazing woman won her own gold medal, wearing the number 16, as part of the United States National Women’s Team that won their 4th World Cup Championship AND she won the Bronze Ball as the third-best player in the tournament! Now, little girls everywhere look up to her, and will be working hard to become like Rose.”

Hamm was a forward for the U.S. women’s national soccer team from 1987 to 2004. Now retired from soccer, she is a two-time FIFA Women’s World Cup champion and a two-time Olympic gold medalist.

After Lavelle and her U.S. teammates won in their final 2-0 game against the Netherlands, Mount Notre Dame celebrated in a Facebook post: “She’s always been a star to us! It has been an absolute joy to watch Rose Lavelle ’13 shine in the World Cup. Can’t say we are surprised — she was voted Most Athletic her senior year! Congratulations to Rose and Team USA! The MND community couldn’t be prouder!

After high school, Lavelle went on to play for the University of Wisconsin, playing for the Seattle Sounders summer league team during her time off from school. That’s where she was really discovered by coach Jill Ellis, who stood by her during her 2017 hamstring injury, allowing her to blossom into a successful FIFA superstar.

After watching the final with bated breath, Lavelle’s hometown alma mater tweeted a joyful tribute to its local celebrity: “Congratulations @USWNT! Couldn’t be prouder of our very own @roselavelle! #FIFAWWC19.”