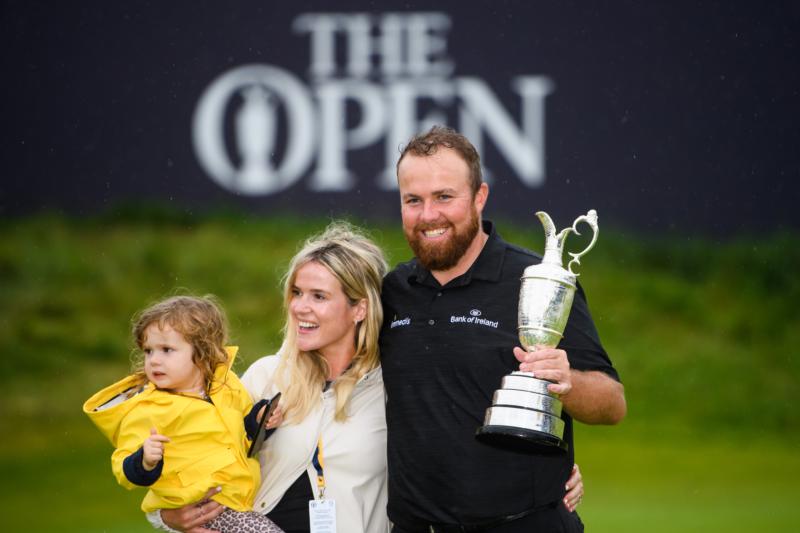 Irish golfer Shane Lowry poses with his wife, Wendy, and daughter, Iris, after winning the British Open July 21, 2019, in Portrush, Northern Ireland. The 32-year-old Irishman held on through a wet and windy day at Royal Portrush to beat Tommy Fleetwood by six strokes and win his first major. (CNS photo/Petter Arvidson, pool via Reuters)

During the competition, many people were struck by the image of Lowry’s mother, Bridget, clutching a statue of St. Anthony at the course in Portrush, Northern Ireland.

“She has a very strong devotion to St. Anthony,” he said.

As a youth, Shane Lowry was an altar server at the parish. During Masses July 20 and 21, parishioners prayed for his success.

“We … included him in our prayers of intercession; there was great anticipation. The whole place, you can feel a buzz around the town,” Father Deegan said.

He said he prayed that “the Lord’s peace would be upon him in his endeavors, like all people involved in sport, that they would know something of God’s glory and goodness in their lives.”

Lowry began playing golf at age 12 but was also involved in the local Gaelic Athletic Association club; however, golf won out over Gaelic football.

“As a parish, as a community, we feel very proud of Shane as a native, and his family, I mean they’re lovely people, good solid earthly people, and it’s great for Clara. It’s a small town, it’s not on any major tourist map or anything like that, but it may change now,” said Father Deegan.

“There’s a great feeling of pride and elation … it’s given a great boost to the community,” Father Deegan told The Irish Catholic.

Brady is a staff writer for The Irish Catholic, Dublin.