Friends lend a hand to spruce up historic Catholic cemetery 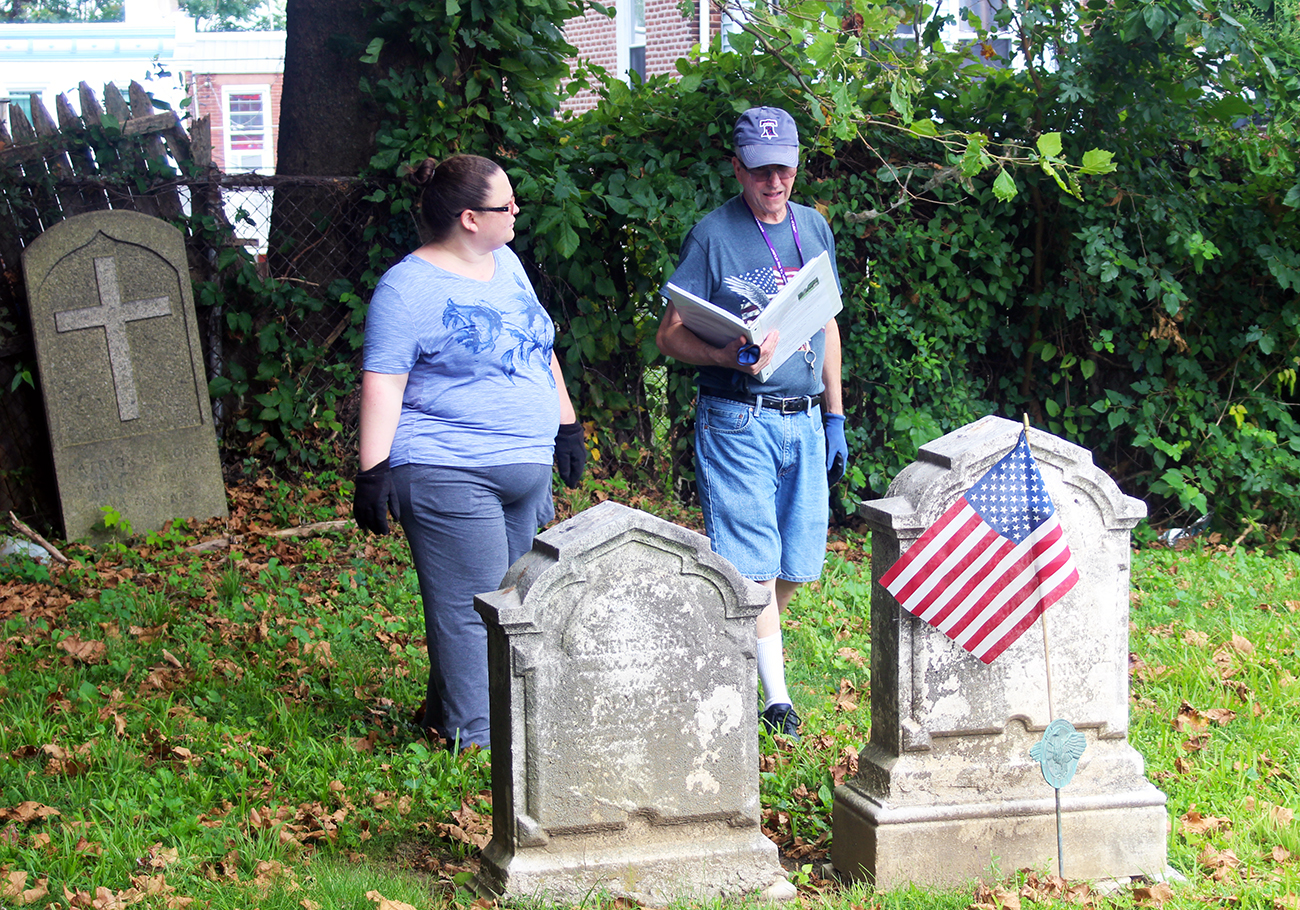 Joseph Taylor, coordinator of the Friends of St. Joachim Cemetery, inspects graves with a fellow volunteer at an Aug. 17 cleanup effort at the site, where some 2,400 souls are buried. (Photo by Gina Christian)

Several parishioners in the city’s Frankford section recently sharpened their pruning shears to spruce up a historic Catholic cemetery.

About 10 volunteers gathered on Aug. 17 to trim branches and clear underbrush in the graveyard of St. Joachim’s Church, where the first burial took place in January 1848. Since then, over 2,400 individuals – most of them of Irish descent – were laid to rest in the cemetery, although only 227 graves are actually marked by headstones.

Despite having relatively few monuments, the cemetery is a map of Catholic life in Philadelphia over the centuries, according to volunteer organizer Joseph Taylor.

“Every person buried here has his or her own story,” said Taylor, who heads up the Friends of St. Joachim Cemetery. “This graveyard shows how the parish evolved, and in what context.”

Formed in 1843, the St. Joachim congregation quickly outgrew its initial church, the cornerstone of which was laid in 1845 after the city’s anti-Catholic riots of 1844. In 1874, work began on a larger structure, which was destroyed by fire in 1978. The third and present church was dedicated in 1981.

In 2013, St. Joachim merged with Holy Innocents Parish, which maintains the cemetery’s records. The former convent was purchased by the Capuchin Franciscan order in 2016, and now houses a friary and prayer center named in honor of Padre Pio.

For Taylor, the commitment to St. Joachim’s cemetery began as a way to honor its veterans, who served in the Civil War, World Wars I and II, and the Vietnam War. In 2015, he began cataloguing their graves, placing flags on them for Memorial Day.

“There’s just so much information that’s not being brought out,” he said.

Prior to the cleanup, Taylor gave volunteers a brief chronology of the cemetery, noting that at $8 to $32, the lots were originally much less expensive than their modern counterparts. Nowadays, prices for a cemetery plot in the Philadelphia area generally start anywhere from $2,000 to $5,000. 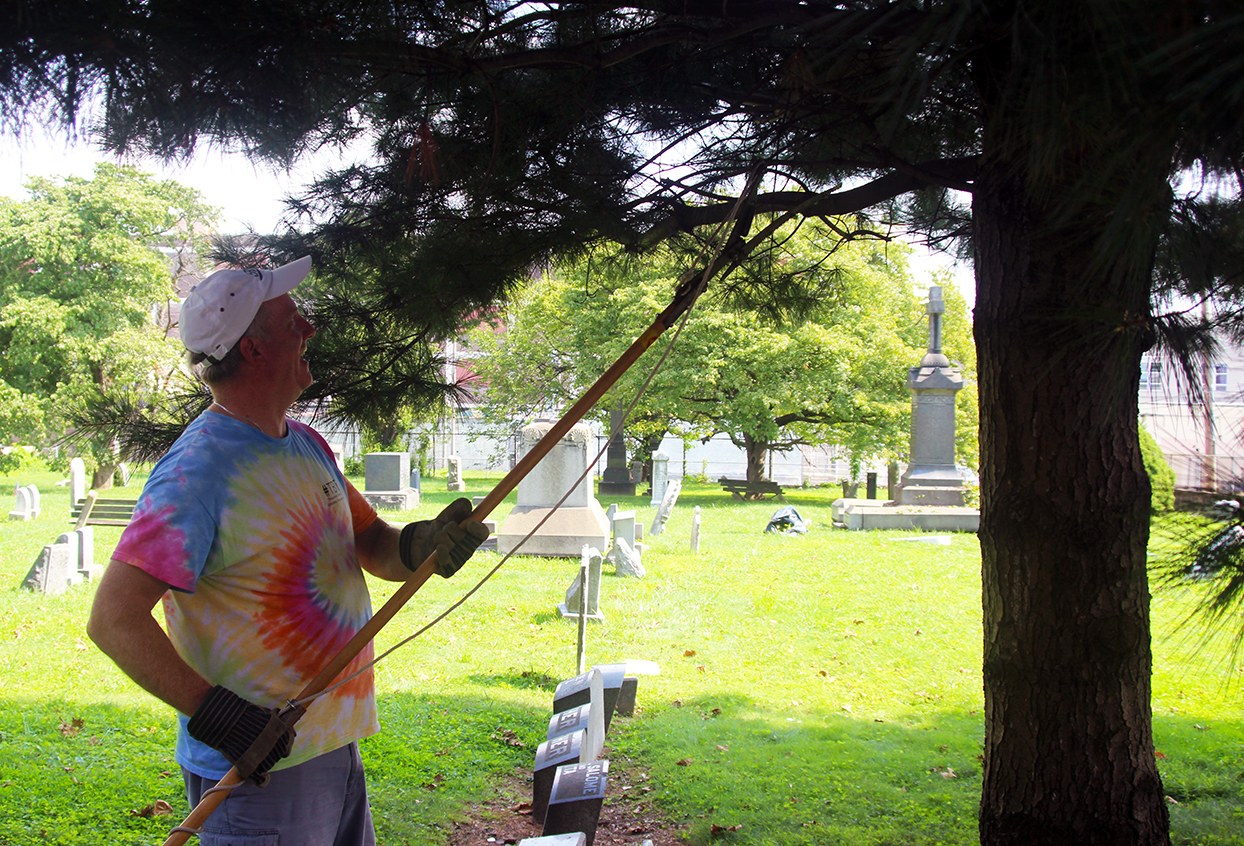 While he and former parishioner Bob Smiley maintain an extensive database on the graveyard, Taylor said that locating the remains of the church’s first resident priest, Father James O’Kane, will take some detective work.

Father Kane – who prior to his ordination worked at what was then Friends Insane Asylum – died in 1852 at age 40. Rather than move his remains, the flourishing young parish opted to build its larger second church over the priest’s grave, and Father Kane ended up in the northwest corner of the basement. However, Taylor said, it’s unclear if the priest’s grave was moved after that church was destroyed by fire.

Taylor is also interested in further researching the Betancourt family, whose large, slab-covered plots along the cemetery’s Griscom Street wall are among the site’s most prominent graves.

Born in 1796, Alonzo Betancourt was a native of Puerto Principe (now Camagüey) in Cuba, where according to several accounts he was active in early efforts to gain that country’s independence from Spain. Betancourt later married Jane Cornick of Frankford, which was then still a town outside of Philadelphia, and the couple had two daughters, Isabel and America, who are buried alongside their parents.

In addition to raising historical awareness, tending the cemetery is “a very Catholic thing to do,” said Holy Innocents pastor Father Thomas Higgins, since both the living and the dead are one in the communion of saints.

“We want to keep cemeteries looking good out of respect for those who have gone before us,” said Father Higgins, who donned workgloves to trim several large pine trees with a pole saw.

Sean Brassil, a recent transplant to the neighborhood, agreed.

“They’re souls, children of God,” said 22-year-old Brassil, who also volunteers at the Padre Pio Center. “And they deserve to have a resting place that’s kept properly.”

For more information about the Friends of St. Joachim Cemetery and its volunteer opportunities, contact Joseph Taylor at Joseph.M.Taylor12@gmail.com.

NEXT: In Harrowgate, Catholics get their ‘fighting Irish’ up to face challenges