In Harrowgate, Catholics get their ‘fighting Irish’ up to face challenges 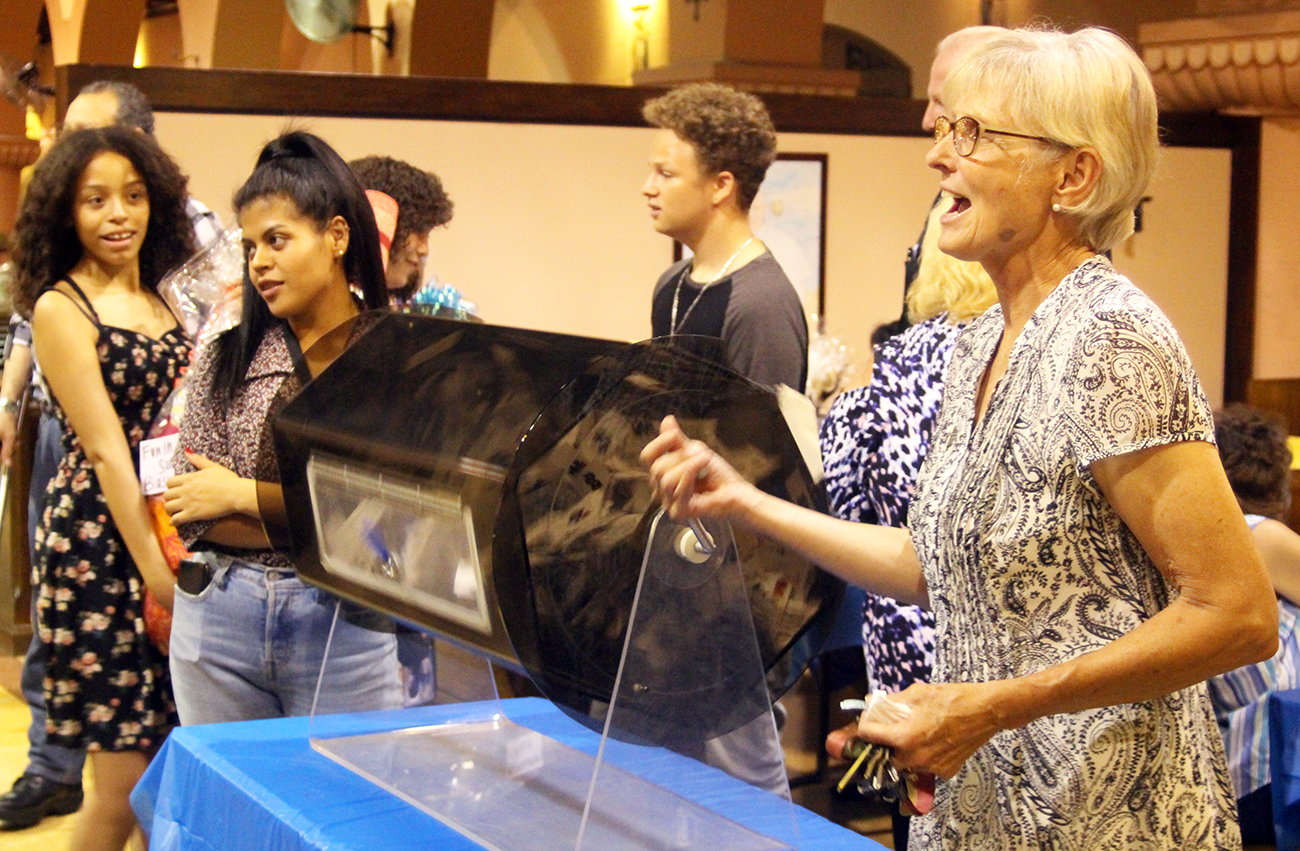 Sister Linda Lukiewski, S.S.J., oversees a July 24 raffle at St. Joan of Arc, a worship site of Holy Innocents Parish in Philadelphia. The site is celebrating its 100th year, thanks to a dedicated community of current and former parishioners. (Photo by Gina Christian)

Mass attendance, parish contributions and even belief in the real presence of Jesus in the Eucharist may be at historic lows, but Catholics at one Philadelphia church say they’re determined to “light a candle rather than curse the darkness.”

Father Thomas Higgins, pastor of Holy Innocents Parish in Philadelphia, quoted the proverb in his homily during a July 24 Mass at St. Joan of Arc Church. Located in the city’s Harrowgate section, St. Joan of Arc – now a worship site for Holy Innocents — has been a constant in a neighborhood that ranks among Philadelphia’s poorest and most violent due to economic decline and the opioid epidemic.

The midweek liturgy and reception marked St. Joan of Arc’s fourth annual drawing for a Notre Dame football game trip, as well as being the latest event in the site’s year-long centennial celebration. Founded in 1919, the former parish merged with Holy Innocents in 2013, but continues to offer Sunday Masses in English and Spanish. In addition, the site provides an array of pastoral and social support services, including resources generously funded by archdiocesan Catholic Social Services through the annual Catholic Charities Appeal.

More broadly, the July 24 gathering represented the efforts of current and former parishioners to address the challenges faced by both church and neighborhood, said Father Higgins, who also provided free copies of Bishop Robert Barron’s “Letter to a Suffering Church” during the evening.

Admitting that “we’re all guilty of grumbling,” Father Higgins commended the estimated 60 attendees for “choosing to stay and fight, and to be holy men and women of God, to light a candle.”

He added that “commemorating St. Joan of Arc’s 100th anniversary is one such candle.”

The Notre Dame prize highlighted this commitment, and also served as an example of creative fundraising by St. Joan of Arc supporters.

While many Catholic parishes chance off Fighting Irish getaways, the St. Joan of Arc trip is completely donated by former parishioners, with one couple’s South Bend-area relatives opening their home to the winners. No cash outlay is required from the parish, enabling the raffle to typically net anywhere from $15,000 to $25,000 for the St. Joan of Arc site.

“My sister-in-law received her master’s degree from Notre Dame, and she still lives out there,” said Dolores McAdams, who along with her husband Jim and several volunteers developed the prize package. “The winner stays at the house, and Jim gives a customized tour of the school. All of the money raised goes to St. Joan of Arc; we don’t pay one penny out of the ticket sales.”

McAdams, now a member of St. Andrew Parish in Newtown, said that she and fellow supporters had initially considered having a centennial gala, but rethought the option after a meeting on development strategies. 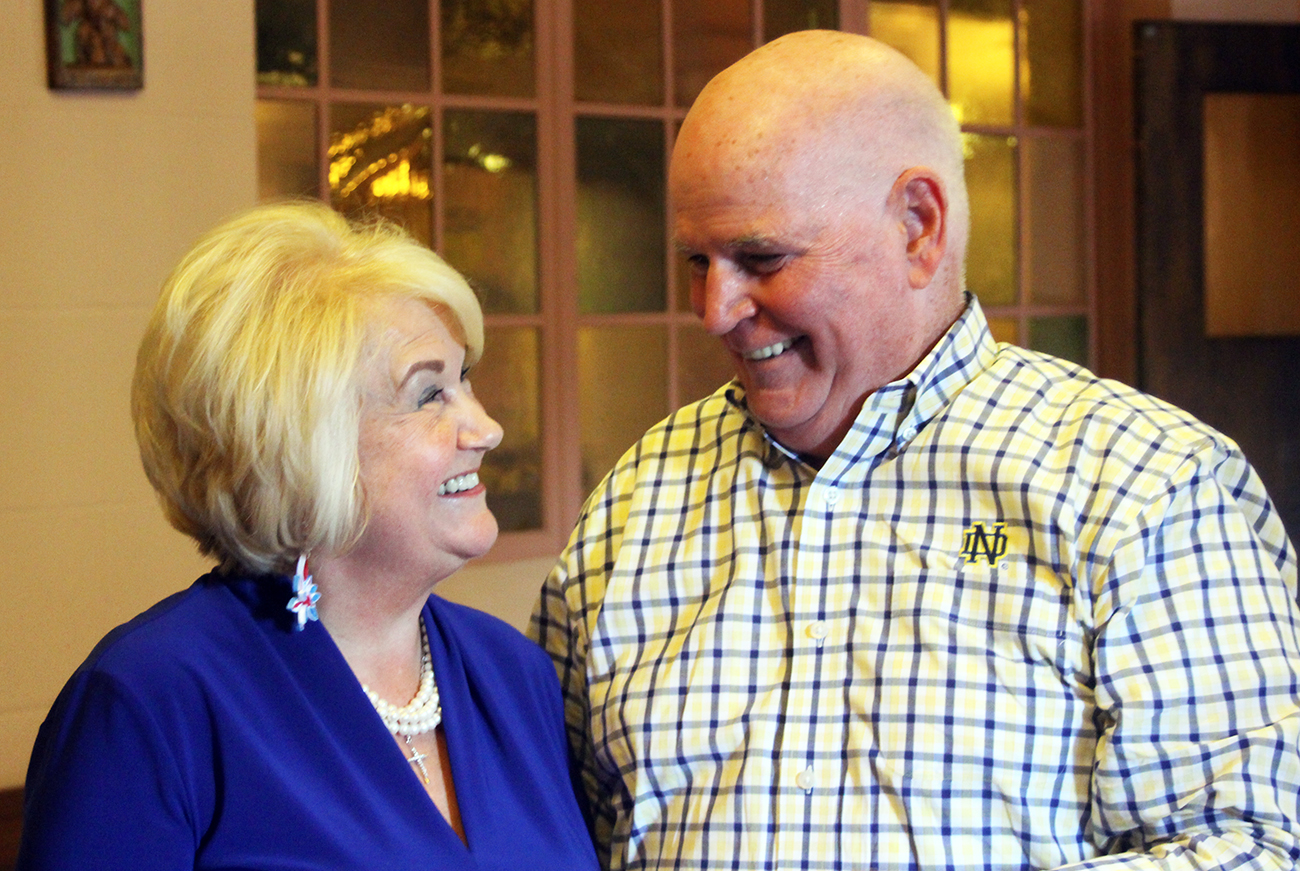 “One of the Sisters of Mercy was at the meeting, and she told me, ‘You know, if you have something you can chance off, you’re going to make more money and it won’t be as laborious,’” said McAdams.

In fact, moving away from “passive, transactional” events such as galas towards fundraising efforts that build long-term relationships is vital for Catholic churches, according to Alexander Guin, a managing consultant at American Philanthropic of West Chester.

Writing in that firm’s Philanthropy Today publication, Guin pointed out that many parishes continue to rely on outdated charitable giving tactics that no longer work for congregations disaffected by scandals and secularization.

Instead, Guin recommends “(making) parish fundraising more faithfully Catholic” so that it “(proceeds) from the perspective of communio, honoring parishioners as members of the body of Christ.”

That’s exactly what motivated the McAdamses and those in attendance on July 24, said Sister of St. Joseph Linda Lukiewski, St. Joan of Arc’s evangelization and Hispanic minister.

“A lot of former St. Joan of Arc people who grew up here really love this place,” she said. “They want the church to remain in places like this, and they’ve been very, very generous in doing whatever they can to help us.”

Current parishioners have been equally central to sustaining the site, she stressed, including a number of youth who serve in various parish ministries.

One has even offered to portray St. Joan of Arc on horseback as part of a procession that will accompany an Oct. 20 centennial Mass, which will be celebrated by Auxiliary Bishop Edward M. Deliman.

During the reception that followed the July 24 liturgy, Father Higgins jokingly volunteered Sister Linda for the reenactment role. The evening’s laughter grew even louder when the unnamed winner of the Notre Dame trip — who did not attend the gathering — was unavailable to take the phone call informing him of his prize.

Such moments speak to the heart of what makes a parish, said Dolores McAdams.

“It’s a group effort; it’s about the people,” she said. “That’s community.”

NEXT: Kids saddle up for safety with help from Philly police