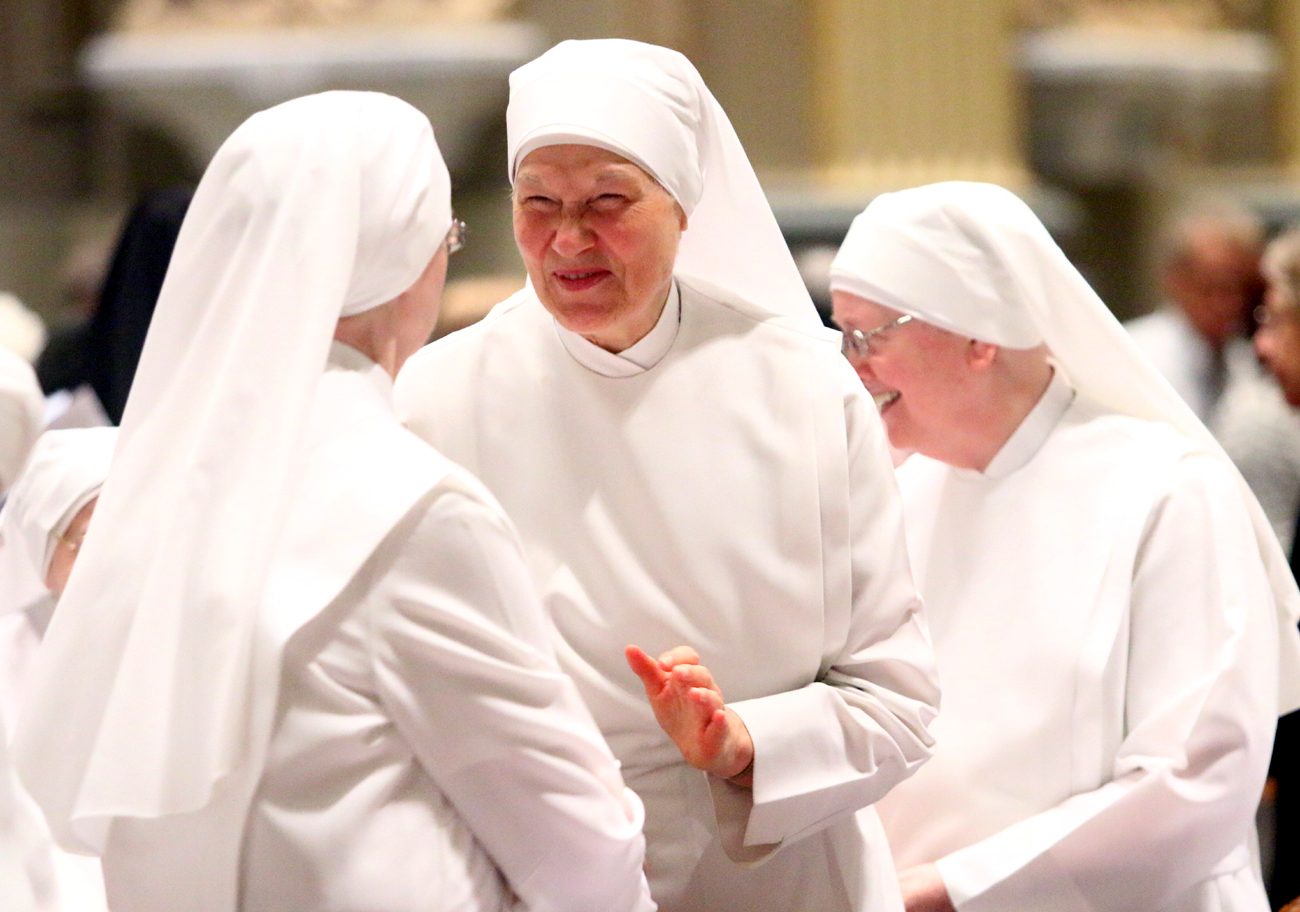 Little Sisters of the Poor — including Sister Veronica Susan, center — greet one another at the Mass of Thanksgiving on their 150th anniversary in Philadelphia Aug. 24 in the Cathedral Basilica of SS. Peter and Paul. (Photo by Sarah Webb)

The Golden Years. What a wonderful time for a person to sit back and enjoy the fruits of past labor surrounded by loving family, just relaxing. Maybe that’s true for many if not most people, but if you’re poor and alone there is little gold in those years. But it doesn’t have to be that way.

Just ask Dave, a resident of Holy Family Home, conducted by the Little Sisters of the Poor in West Philadelphia.

“After living alone for many years, I learned to appreciate community here,” he said. “I’m absolutely happy.” But space is limited at the home so he advises other seniors to “fill out an application and get on the waiting list.”

Serving the poor of Philadelphia for 150 years without regard to race or creed is a proud accomplishment. That’s how long the Little Sisters of the Poor have been active in this city and they were duly honored by a Mass of Thanksgiving celebrated by Archbishop Charles Chaput at the Cathedral Basilica of SS. Peter and Paul on Aug. 24, the exact date they arrived here in 1869.

It was followed by a reception at the nearby Logan Philadelphia Hotel.

When the sisters arrived in Philadelphia, poor really meant poor, especially if one was elderly without family and unable to work. There were no such safety nets as social security, food stamps, Medicaid or Medicare. Thank God there were such groups as the Little Sisters of the Poor. They were a very young congregation back then.

The Little Sisters were founded in France less than three decades earlier by now St. Jeanne Jugan. Her heroic ministry quickly spread to wherever there was need.

Their first Philadelphia establishment was St. Mary Home for the Aged at 18th and Jefferson Streets. This was followed by St. Michael’s Home in Germantown and Sacre Coer Home at 5300 Chester Avenue in 1902, which was replaced in 1973 by today’s Holy Family Home. 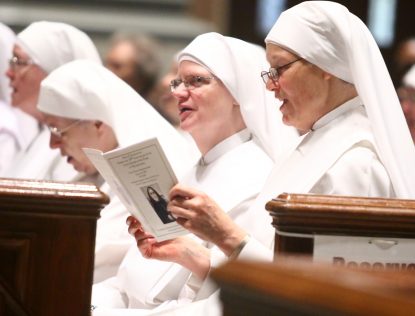 Little Sisters of the Poor participate in a Mass celebrating their 150th anniversary of serving the elderly poor in Philadelphia. (Sarah Webb)

At this time it shelters 96 residents, and perhaps the great change over the century and a half is that with modern medicine, the residents are likely to live to a very ripe old age.

In spite of today’s many government-funded services there is still room for such places as Holy Family Home for those who fall through the bureaucratic cracks.

While the ministry has been assisted by many generous donors over the years, the heart and soul of what the Little Sisters do is begging, although in this generation it is known by a more subtle term: fundraising.

Today much of the work is done directly through the parishes, rather than door to door as was done in earlier generations, according to Sister Veronica Susan. She is the development coordinator although, in her words, “chief beggar” is an accurate description.

It is her task to visit the various markets and businesses that make donations in kind, for instance at grocery stores, and she also gives presentations especially at churches.

If she gives a talk at a church the collection is not taken up by the ushers, it is Sister Veronica standing at the door with a basket.

True to their charism, the Little Sisters of the Poor, who still wear a traditional habit, do not have endowments for their facilities. It is touch and go, relying on the Providence of God, and what comes in goes out.

In an era of steep declines in religious vocations, especially for women religious, the Little Sisters of the Poor are relatively stable as an international congregation. Sister Veronica believes this may well be attributed to the fact that they have changed with the times. If she were alive today, St. Jeanne Jugan would feel perfectly at home at aptly named Holy Family Home. 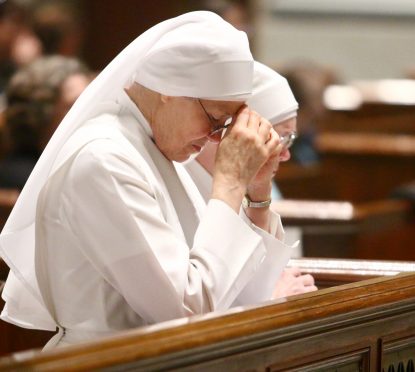 And Holy Family isn’t just a name — the residents really do bond and care for one another. For example Mary Lou, who feels very content and secure, worries that “some residents in the second floor apartments are not sure what to do in a fire drill.”

Sister Mary, one of St. Jeanne’s youngest spiritual daughters at Holy Family Home, believes “the charism of St. Jeanne Jugan is very alive and continues to grow.” For herself, once she entered the congregation, she never doubted her vocation. “I am sure this is what God wants,” she said.

That’s pretty much the same sentiment of Sister Marie, who is as old as any of the residents, and she finds reward in “the graces God has given me as a Little Sister of the Poor.”

No matter if the residents have a different faith or no faith, the sisters see them all as children of God. 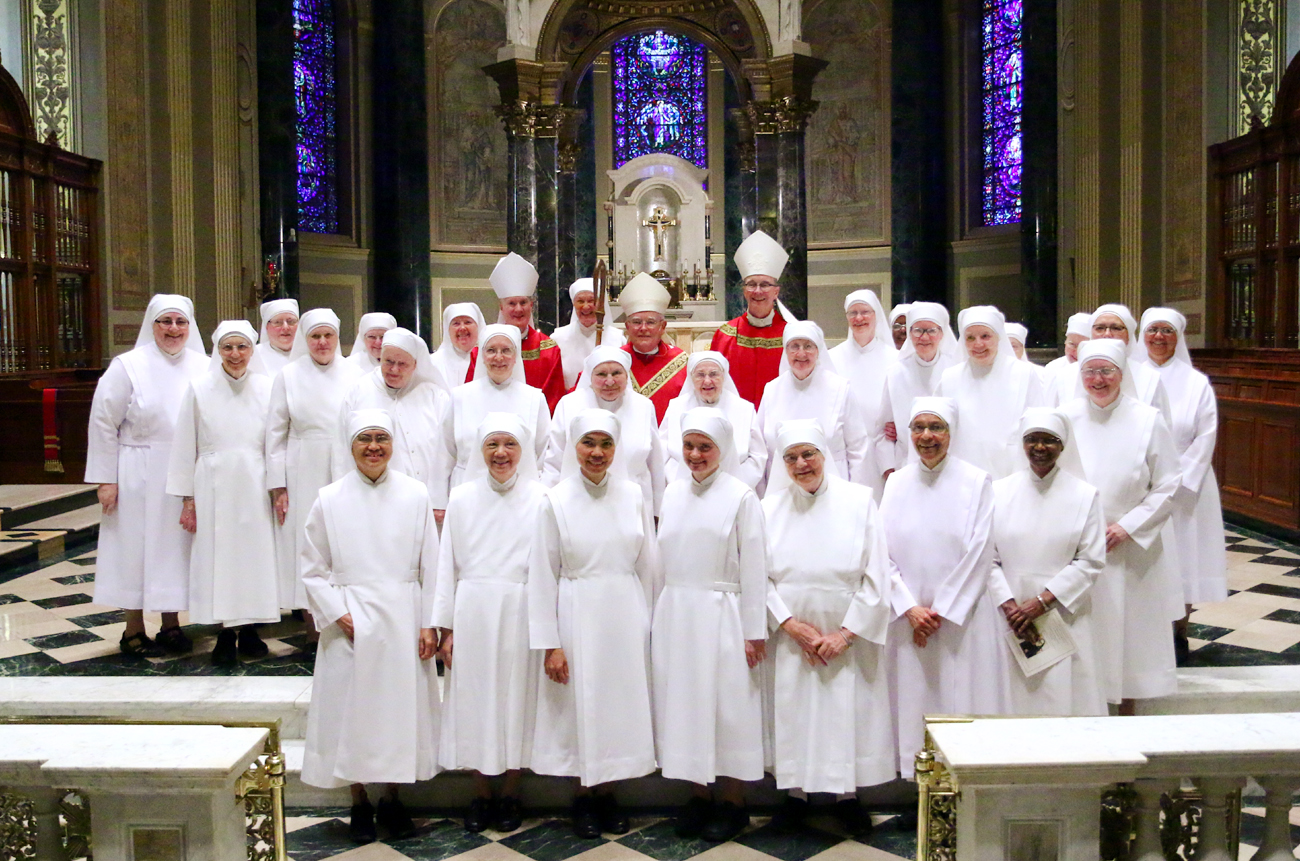 The Little Sisters of the Poor in Philadelphia pose after Mass Aug. 24 at the Cathedral Basilica of SS. Peter and Paul with Archbishop Charles Chaput and Auxiliary Bishops Michael Fitzgerald (left) and Timothy Senior. (Sarah Webb)