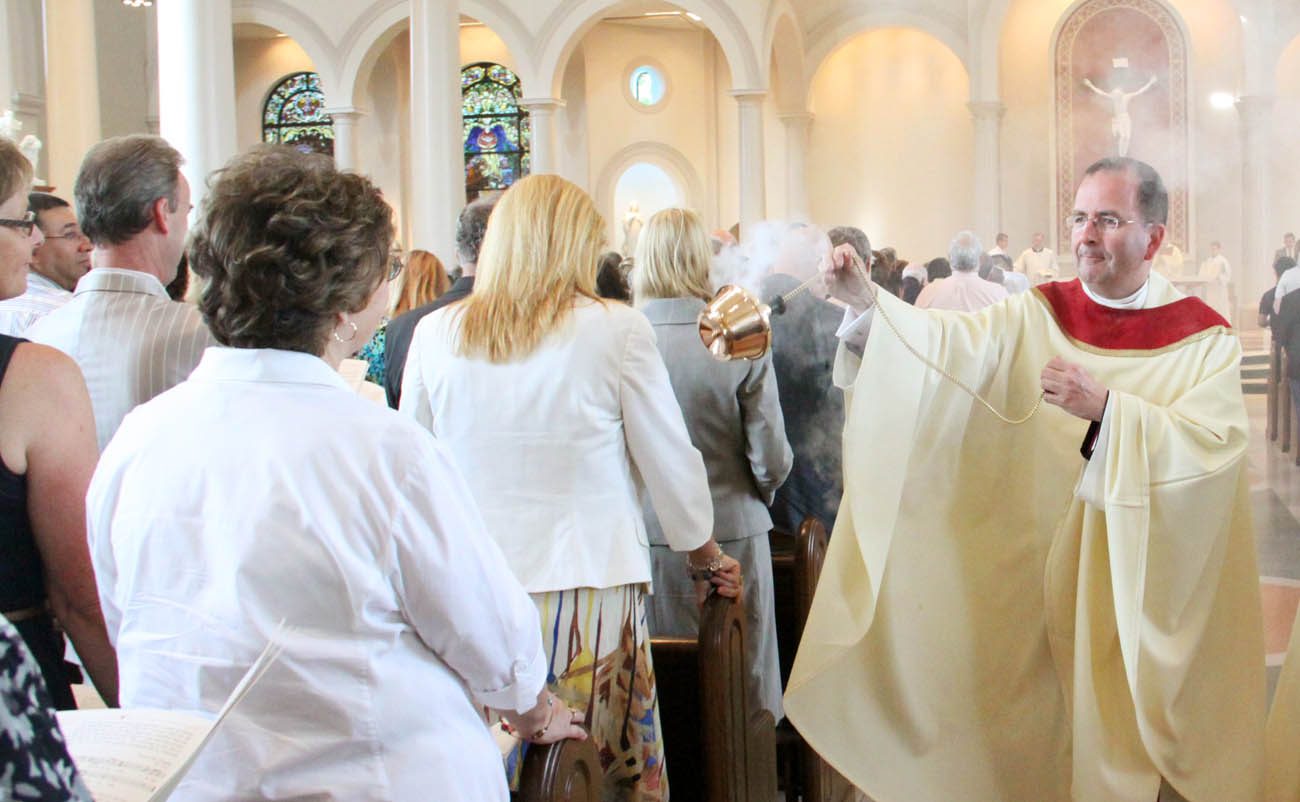 Msgr. Joseph C. McLoone blesses parishioners during the dedication Mass of St. Joseph Church, Downingtown, in 2013. He has been arrested on charges of theft from the Chester County parish. (Photo by Sarah Webb)

Msgr. Joseph C. McLoone, 56, was arrested Aug. 21 in Chester County for theft of funds from St. Joseph Parish in Downingtown, where he was pastor from 2011 until his resignation in February 2018.

The arrest follows an investigation begun last year that probed the archdiocesan priest’s financial and personal improprieties at St. Joseph’s, one of the Archdiocese of Philadelphia’s largest parishes.

As the only signatory on the account, he had an unchecked ability to use in any way the monies he deposited there, in particular the monetary contributions from weddings, funerals, second collections and other sources at the busy parish. It was a violation of the archdiocese’s financial reporting protocols required of every parish.

When the account was discovered in 2018 its assets were frozen and officials of the archdiocesan Office for Parish Service and Support launched an investigation that found more than $110,000 had been deposited into the account. The officials did not believe Sunday collections, contributions to the parish capital campaign, or school and PREP tuition fees were deposited into it.

While some of the expenses were documented as going toward normal parish expenses, others were not.

In the spring of 2018 the archdiocese acknowledged that some $50,000 had been paid from the account since 2011, and of that amount, Msgr. McLoone had taken $1,500 “for personal expenses of an inappropriate nature” concerning “relationships with adults” not involving members of the parish, nor children, according to a statement at the time.

The archdiocese at that time also informed the Chester County District Attorney’s Office and cooperated fully in its own investigation.

This week’s criminal complaint by the District Attorney’s Office said Msgr. McLoone misappropriated more than $98,000 to fund a lifestyle that “included a beach house, travel, dining, and spending on adult men with whom he maintained sexual relationships.”

Last year after admitting to his behavior that violated the archdiocese’s Standards of Ministerial Behavior and Boundaries and financial rules, Msgr. McLoone offered his resignation as pastor to Archbishop Charles Chaput, who accepted it.

Since that time Msgr. McLoone has remained on administrative leave and may not function publicly as a priest. He is living in a private residence.

Following his arraignment in a Chester County district court, he was released on $50,000 bail and faces a Sept. 18 preliminary hearing on multiple charges of theft.

According to an Aug. 21 statement, the archdiocese pledged “to pursue full financial restitution on behalf of the parish for expenditures acknowledged or determined as inappropriate.”

Spokesman Ken Gavin called the charges “serious and disturbing,” and added the archdiocese and St. Joseph Parish “will continue to cooperate with law enforcement as the criminal matter enters its next phase.”

PREVIOUS: Kids saddle up for safety with help from Philly police