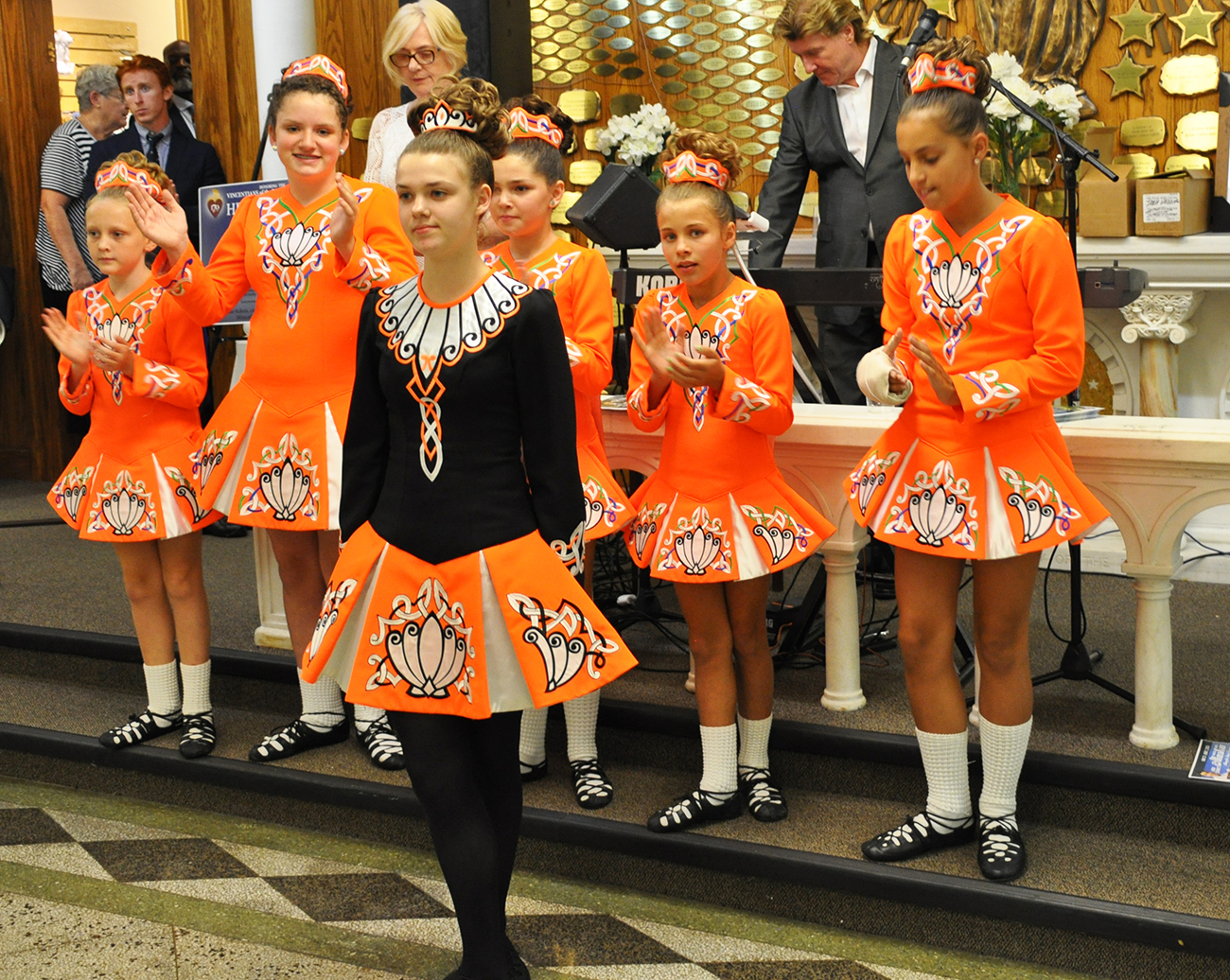 Members of the Rince Ri Irish Step Dancers performed at a reception following an Aug. 21 Mass celebrated in honor of Our Lady of Knock. More than 500 attended the gathering, which took place at the Miraculous Medal Shrine in Philadelphia. (Photo by Christopher Grosso / Courtesy of the Central Association of the Miraculous Medal.)

As a former Philadelphia police officer and firefighter, Jim Mannix knows he can count on the Blessed Mother for backup.

“I’ve been banged up, I’ve been in the hospital a few times, but I’m walking and I’m standing,” said Mannix, a parishioner at St. Matthew in the city’s Northeast section. “And Mary has gotten me through a lot in life.”

On Aug. 21, Mannix joined more than 500 faithful in celebrating the feast of Our Lady of Knock at the Central Association for the Miraculous Medal (CAMM) in Philadelphia.

Now in its 140th year, the devotion originated with an 1879 apparition of Mary, St. Joseph and St. John the Evangelist at a small parish church in County Mayo, Ireland.

Witnessed by 15 villagers, the silent apparition on a rainy summer evening lasted two hours. Over the years, devotion to the appearance has endured, with both Pope John Paul II and Pope Francis visiting what has become an internationally renowned shrine.

On this side of the Atlantic, Irish cultural leaders from the tri-state area have teamed up with CAMM to create a local shrine on the grounds of the Miraculous Medal shrine’s complex.

The Aug. 21 Mass and reception kicked off this partnership, said Sheila O’Hagan McGirl, director of institutional advancement for CAMM.

McGirl — who sang the national anthems of both Ireland and the U.S. before the Mass – said that CAMM is a natural choice for a shrine to Our Lady of Knock. 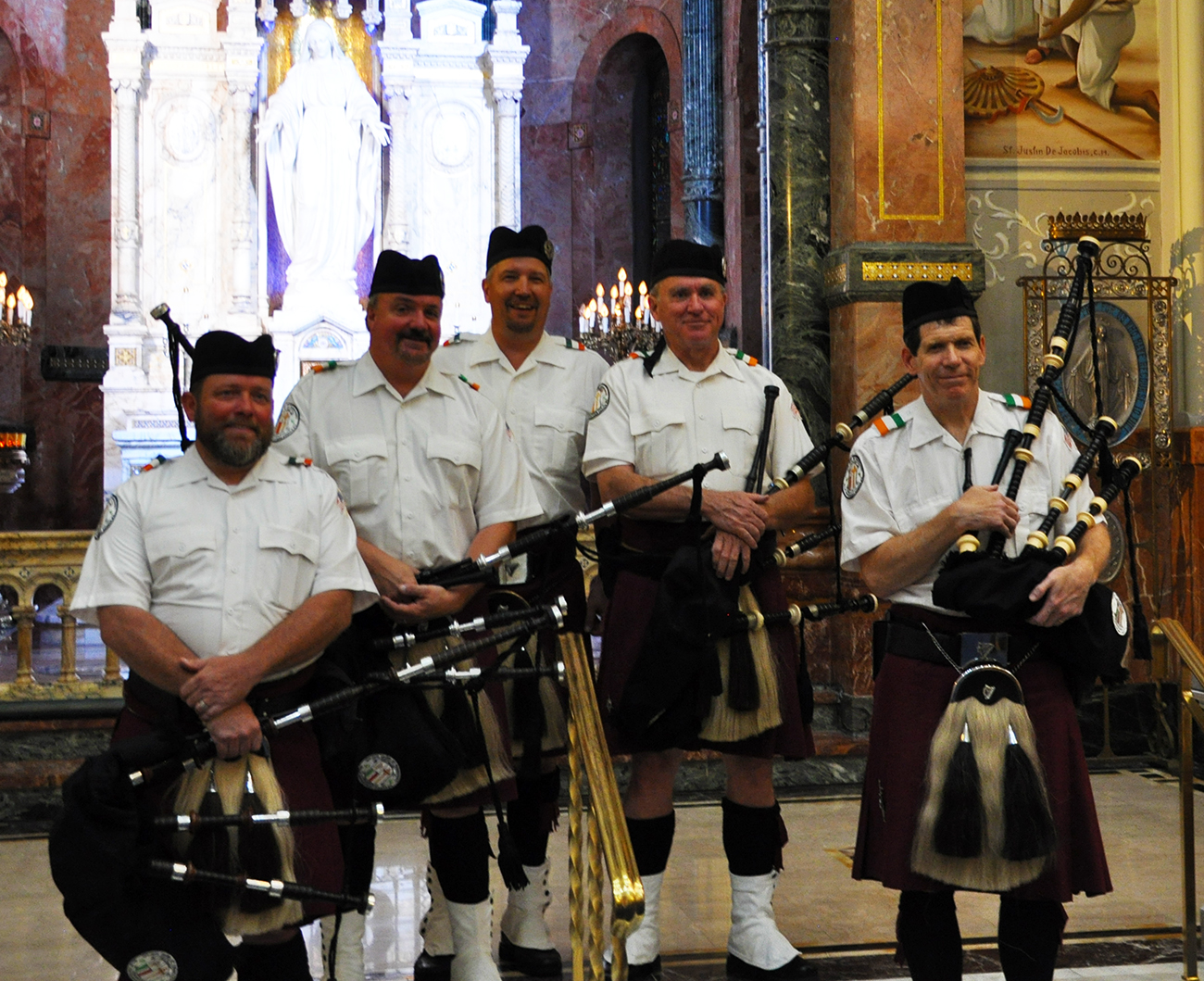 “One hundred forty years ago, the cornerstone of the Immaculate Conception chapel at the Miraculous Medal shrine was laid, and 140 years ago in County Mayo, Ireland, Our Lady appeared to the people of Knock,” said McGirl. “We feel connected to the apparition at Knock through our Marian devotion and ministry.”

Mary Jo Timlin-Hoag, CEO of CAMM, addressed attendees at the start of the evening with the simple greeting, “Welcome home,” adding that the Miraculous Medal shrine was “the house the Irish built to teach a strong faith.”

In his homily, Vincentian Father John Timlin linked the Knock apparition to that experienced by St. Catherine Labouré, the 19th-century Marian visionary to whom the Miraculous Medal devotion was initially entrusted.

Father Timlin noted that both appearances demonstrate how Mary “comes to poor people in a profound way,” and that “she is there in some of the most difficult and painful moments” of life.

For recent Villanova graduate Erik Mickiewicz, Mary – like the Catholic faith – has a unique ability to speak to people from diverse backgrounds, including his own Polish-American heritage.

“It’s really about enculturation,” said Mickiewicz, referring to church teaching on how the Catholic faith can take shape in various cultures while remaining universal and authentic.

After the service, attendees were invited to a reception featuring an additional performance by Andy Cooney, as well as the Rince Ri Irish Step Dancers and Irish Thunder bagpipers.

Father Robert Feeney, pastor of St. Bridget Parish in Philadelphia, said the evening was a reminder to “go through Mary” with prayer requests.

“Jesus isn’t going to say no to his Mother,” said Father Feeney, who has been to Knock some 30 times, including a few trips with the Quaker City String Band, for which he previously served as chaplain.

He added that Ireland was a natural choice for an appearance by the Mother of God.

“Of course she would visit,” he said. “Where else would she want to go?”

NEXT: Catholic experts at odds over safe injection site for Phila.