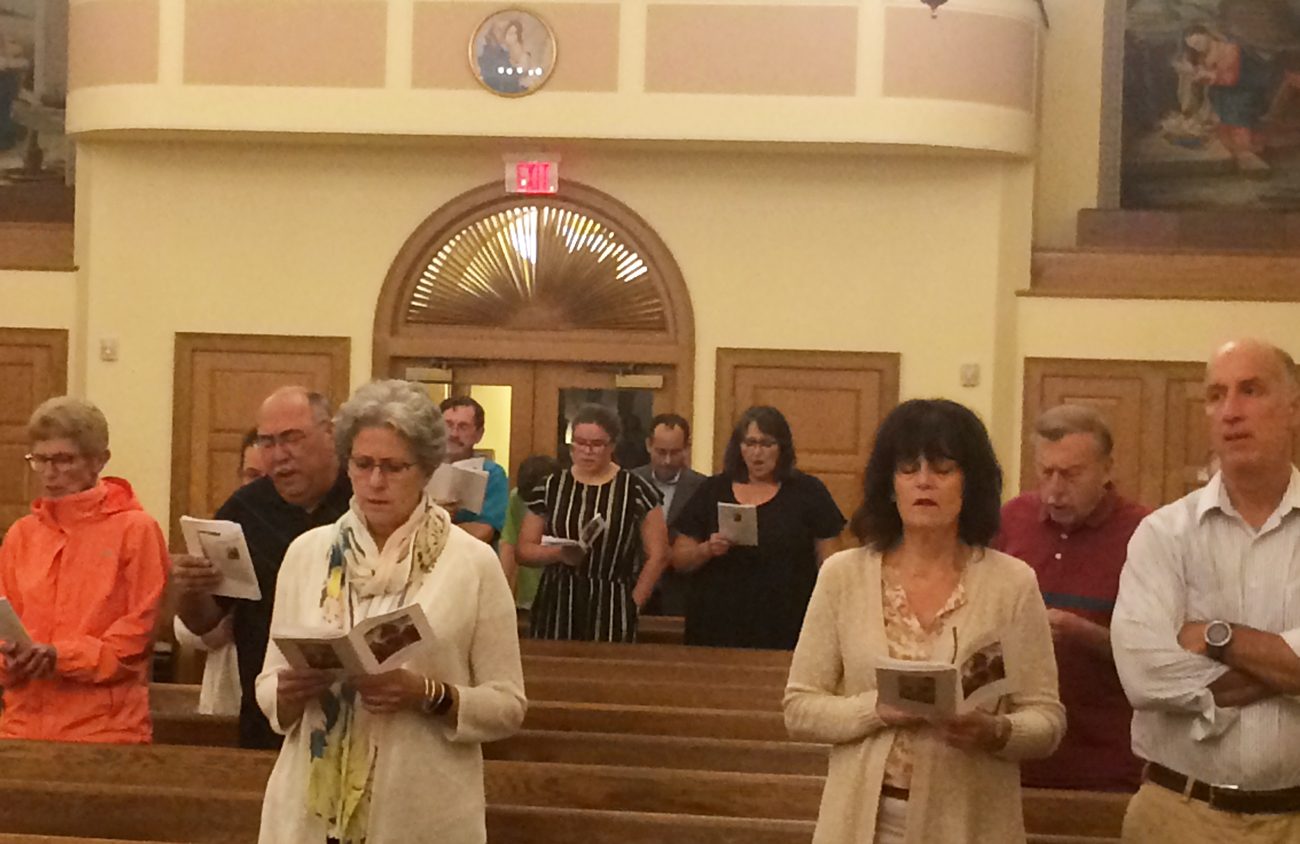 Parishioners of Our Lady of the Assumption Parish in Strafford participate in the Aug. 7-9 triduum in honor of the Blessed Virgin Mary’s Assumption into heaven. This year the feast of the Assumption is celebrated in the universal church on Thursday, Aug. 15. (Photo by Dan McCarty)

It is an annual tradition for Our Lady of the Assumption Parish in Strafford to celebrate its parish feast day with an Assumption Triduum leading up to its Italian Festival that takes place on the Sunday prior to the holy day, Aug. 15.

The triduum this year was celebrated from Wednesday, Aug. 7 through Friday, Aug. 9. All three days began with Evening Prayer and adoration before the Blessed Sacrament in church, led by Father Christopher Moriconi, secretary to Archbishop Charles Chaput.

After each service, it was on to entertainment and refreshments on the parish grounds.

“The tradition started from the very beginning,” said Celia Paolantonio, a fourth generation parishioner for her family. “It really brings community. It’s visible to those walking or driving by. Sometimes, they just pop in.”

Father Moriconi centered each of his talks on a different saint, including Benedict, Katharine Drexel and Thomas Aquinas. During the opening service he talked about how St. Benedict saw destruction in Rome by barbarians during the Roman Empire. He moved to a place where he could hear God in silence and the within the next 1,000 years, the western world was developed.

Similar to those times in some ways, today the foundations of society seem to be crumbling and Catholic identity is lost, resulting in a bleak picture, Father Moriconi suggested. Mass attendance has declined. Many people have little or no reference to God in their everyday lives. They do not believe in eternal life.

“Living without God has spread into the world,” said Father Moriconi.

One lesson that people today can learn from St. Benedict is to try and bring people back to the church and closer to God. Benedict’s teachings can be applied to our culture. They include spending moments in silence as a great way to start, as there are many important moments that occur in silence. Trees growing, the sun rising and water flowing all occur in silence as do babies in mothers’ wombs. Christ himself lived for 33 years in silence. The bread and wine become the body and blood of Christ in silence.

“Again and again, God is showing us that silence is essential to hear his word,” said Father Moriconi. “He is a light for us in darkness.”

On the first night, parishioners of Our Lady of the Assumption (OLA) were able to use their talents in various ways to provide entertainment. Stormy weather forced the festivities inside to the church basement but did not dampen anyone’s spirit.

Master of Ceremonies James Dell’Orefice welcomed the group before the music started.

“May your spirit guide you through every measure so that we may be an instrument of your peace,” he said.

Among the performers was James’ daughter Maria Dell’Orefice, a recent graduate of Baylor University who is pursuing a degree in piano music at Temple. She performed several selections on the violin including “Kitten on the Keys,” “Double Bach Concerto,” “When October Goes” and “All in All.” She has been a member of OLA all of her life performing at countless parish functions.

“It’s a great gathering for the church,” she said. “It’s nice to see people you don’t usually see come and listen to music.”

Father Gerald Carey, pastor of OLA and himself a gifted musician, played the piano with Steve Gilbin singing “Sante Lucia,” “Give Me Jesus” and “Agnus Dei.” Gilbin also joined James and Maria Dell’Orefice for a rendition of “Alla Luce Del Sole.”

The celebration continued on Thursday with Carter Ross providing musical entertainment. He sang an eclectic range of songs and played the keyboard.

The Jazz Sanctuary played a lively set of jazz music on the final evening of the triduum.

The Italian Festival on Sunday, Aug. 11 is one of the biggest events of the year for the parish. This year’s event began with Mass at 1:30 p.m. followed by an outdoor celebration that included food, live music, games and raffles. 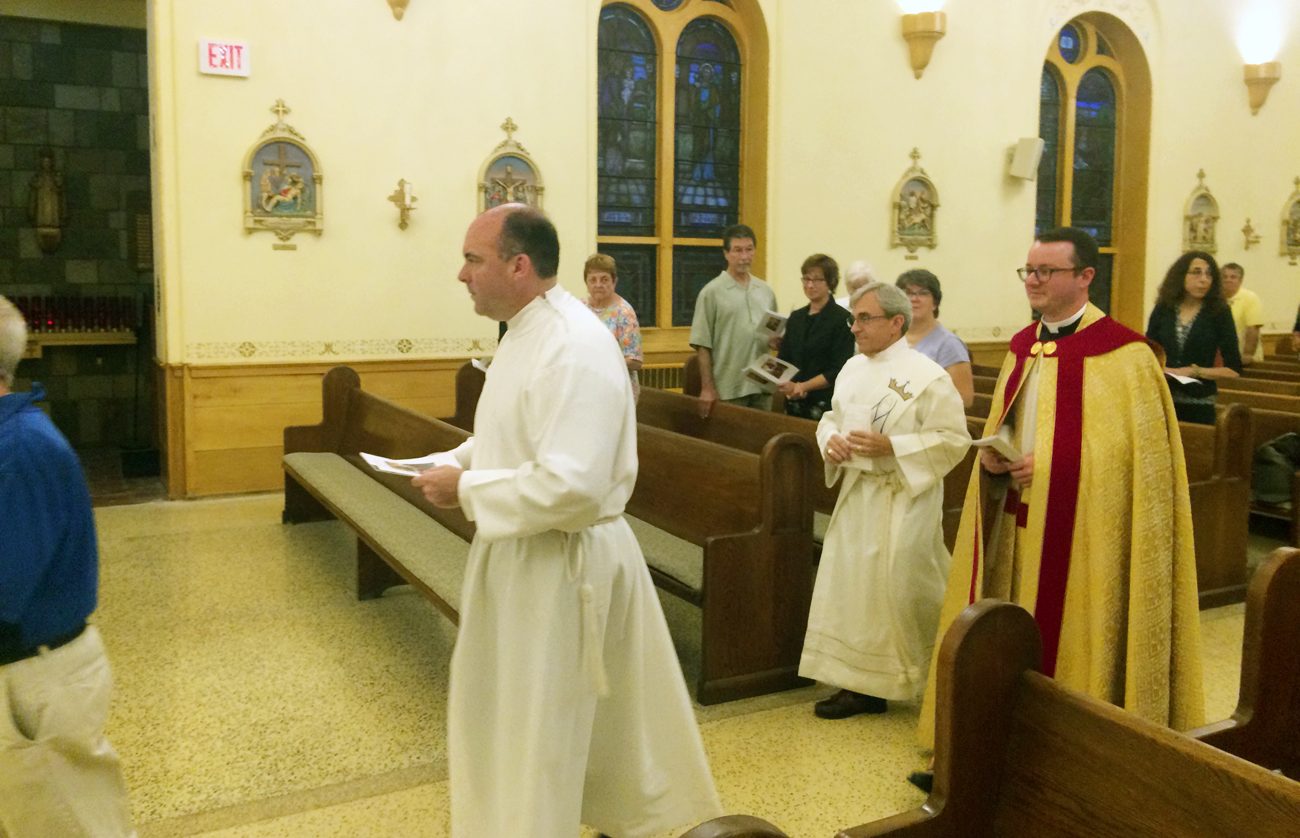 Leading the procession into Evening Prayer and eucharistic adoration during the Assumption Triduum at Our Lady of the Assumption Church in Strafford, held Aug. 7-9, are (from left) Father Gerald Carey, parish pastor; Permanent Deacon John Rose and Father Christopher Moriconi, who led the reflections during the three-day celebration in honor of the parish’s patron. The Feast of the Assumption of the Blessed Virgin Mary is Aug. 15. (Photo by Dan McCarty)