Addiction ministry centers on the power of the Eucharist 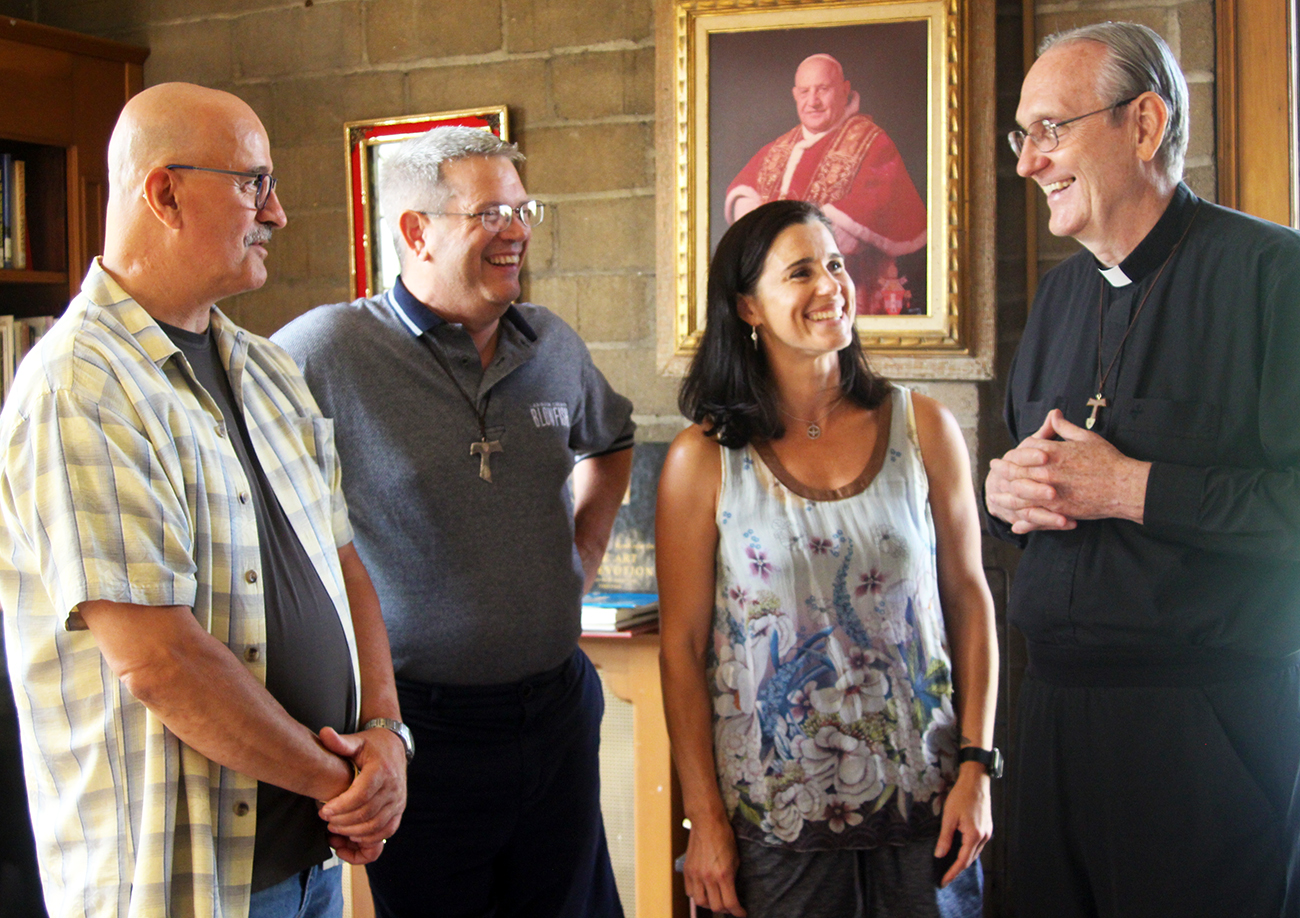 Ken Johnston (second from left) and Father Douglas McKay of the Calix Society, a Catholic support group for those in recovery, speak with fellow members at the organization’s national retreat in August 2019. Founded to help those struggling with alcoholism, Calix has recently expanded its outreach to other forms of addiction, which it works to heal through the power of sacramental grace. (Photo by Gina Christian)

While belief in the Real Presence has declined sharply among American Catholics, one ministry is placing the Eucharist at the center of its expanded efforts to combat addiction.

“Jesus is the answer to all our questions and the solution to all our problems,” said Father Douglas McKay, who serves as the national chaplain of the Calix Society, an international association of Catholics in recovery. “And we know where he’s at: in the Blessed Sacrament.”

Currently based in Glenside, the Calix Society “started over an alcoholic priest back in 1947,” said Father McKay, noting that five concerned laymen, all from the Minneapolis area, petitioned to have a 5 a.m. daily Mass celebrated in order to pray for an addicted priest’s recovery.

After several weeks of sacrificial Masses, the priest was able to maintain his sobriety, and the Calix Society — named after the Latin word for “cup” — formed shortly thereafter.

Speaking at the group’s annual retreat last month, treasurer Ken Johnston estimated there are currently some 35 Calix chapters, or “units,” worldwide, with more than 200 official members plus scores of unregistered participants. Local groups must obtain permission to form from their diocesan bishop, and priests are asked to serve as chaplains whenever possible.

In the greater Philadelphia area, Calix units meet at several area parishes, including St. Patrick’s in Norristown, Nativity of the Blessed Virgin Mary in Media, Queen of the Universe in Levittown and St. Gabriel’s in Philadelphia, where Our House Ministries, a recovery outreach founded by Father McKay, is based.

A unit also meets in Wilmington, Delaware at St. Matthew Catholic Church, and a virtual meeting, available online and by telephone, can be accessed by emailing admin@calixde.org.

Calix works to ensure its members’ sobriety by promoting their sanctification. Meetings generally begin with a celebration of Mass, followed by reflection and fellowship. Devotions such as eucharistic adoration and the rosary, along with frequent reception of the sacraments and retreats, figure prominently in Calix’s programming, which was commended by Pope Paul VI in a 1974 address to the group.

And while the society emerged in response to alcoholism, Calix recently changed its mission statement to officially welcome all who struggle with addiction, both substance-related and behavioral.

“We’ve opened it up to make it more inclusive,” said Father McKay. “We have people who struggle with heroin, with sex addiction, and even people from Overeaters Anonymous. A drug is a drug is a drug.”

Father McKay — who has buried hundreds of overdose victims during more than 40 years of ministry — said that unlike in previous decades, many of those who struggle with destructive substances and behaviors now find themselves battling “cross-addictions.”

In addition, traditional “gateway” substances to drug abuse, such as alcohol and marijuana, are often bypassed altogether by youth.

“They go right to the pills and then advance into even stronger drugs,” he said.

Tom Gallagher, who leads Calix’s unit at Queen of the Universe Parish, agreed. 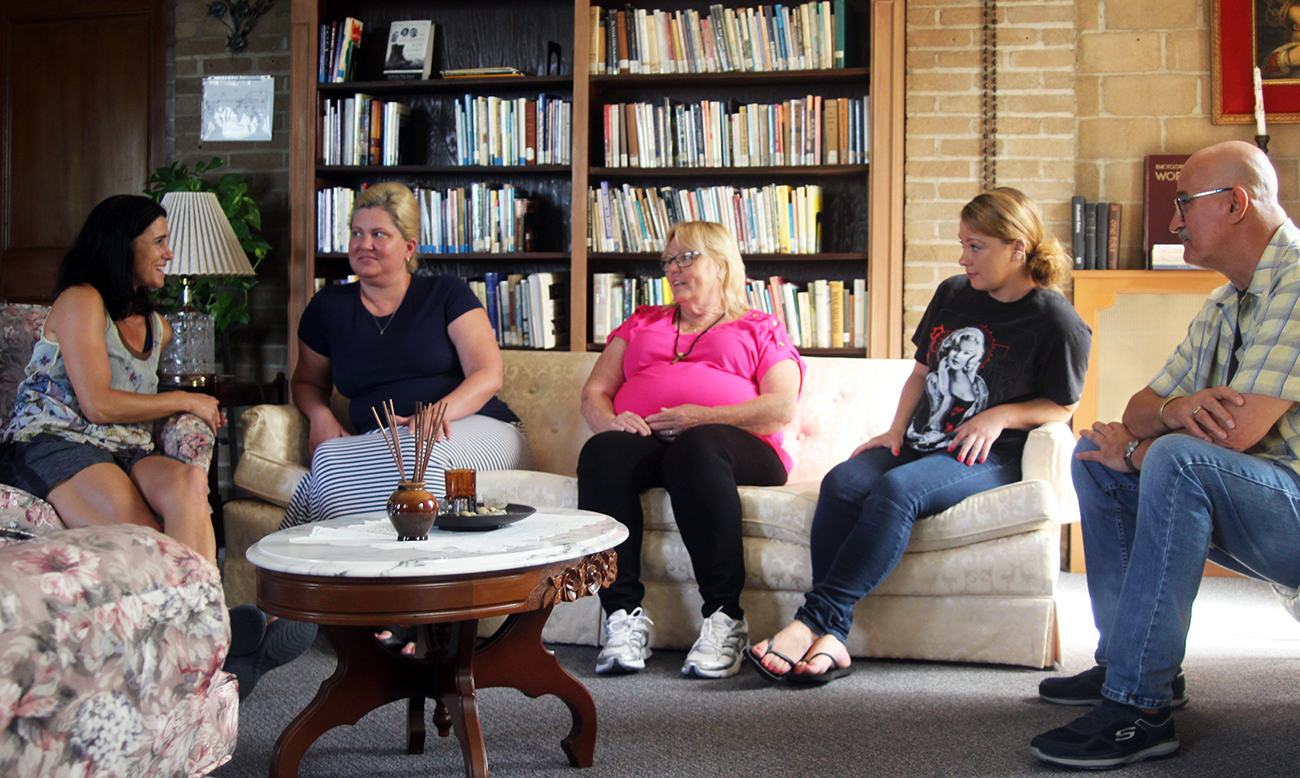 Members of the Calix Society shared their reflections at the organization’s national retreat in August 2019. As a Catholic support group for those in recovery, Calix focuses on the importance of both the Eucharist and the sacrament of reconciliation in healing the wounds of addiction. (Gina Christian)

“Addiction has definitely morphed, especially with the young kids today,” he said during a break at the August Calix retreat. “They’re in AA one day, and they’re dead the next from fentanyl or from mixing alcohol with pills.”

Johnston pointed out that despite such trends in addiction, Calix’s broadened mission still represents a fairly new development in recovery outreach.

“One of the founding principles of Alcoholics Anonymous (AA) was this idea of ‘singleness of purpose,’” said Johnston, a member of St. Luke Parish in Glenside. “Their experience was that when they tried to attack more than one addiction, the effort would fall apart.”

The divide between drinkers and drug users has now blurred at many locations that host 12-step recovery meetings, he added, something that prompted the Calix Society to open its doors even wider.

“What we saw is that when we changed our credo, it wasn’t like all of a sudden we had people coming in with other addictions,” he said. “They were already coming. We just updated our credo to better resemble the population that’s been attending our meetings.”

For Calix’s members, the path to sobriety ultimately leads to a deeper union with God, with the main route being through the sacraments, especially the Eucharist and confession.

After 20 years away from Catholicism, and with nine months of abstinence, Tom — a Philadelphia-area resident who attends Calix meetings at St. Gabriel’s — longed to return to the faith of his childhood.

Now a Calix member for more than eight years, he observed that “rediscovering the Eucharist is a process” for anyone who has walked away from the church.

“And it’s so unfortunate, because I think only about five percent of Catholics even really know what transubstantiation is,” he said. “They don’t appreciate what’s happening; if everybody did, the place would be jammed.”

“The Eucharist is so much more fruitful to me when I’ve made a good confession,” he said. “And that’s one of the things they stress in AA, having a clean house, so to speak.”

The fifth of AA’s 12 steps to recovery directs participants to “(admit) to God, to (themselves) and to another human being the exact nature of (their) wrongs.” And while most Calix members continue to attend AA meetings and to practice the 12 steps, the grace received through the sacrament of reconciliation takes healing to a new level, said Craig C., a Calix member from the Lincoln, Nebraska area.

“We need to learn to forgive ourselves and understand that God loves us the way we are, trying to be the right person that we believe God wants us to be,” he said. “He doesn’t love our sins, but he loves us, as is, right now.”

Healing for all involved

That healing extends to the families and friends of those struggling to overcome addiction, said Mike Maher, a Calix member since 2014.

Maher, who lives in the Diocese of Arlington, began attending meetings after witnessing two loved ones battle substance abuse. He said the meetings enable participants “to appreciate both sides” of the addiction experience, while “bringing them together in Christ.”

“I get a lot of hope through Calix because I see the miracle happening,” he said. “I’m seeing others in recovery, and it gives me tremendous compassion. At the same time, we hear from the affected family and friends, and how addiction has impacted them.”

After years of spearheading the Calix Society, both Father McKay and Johnston continue to marvel at how sacramental grace and a supportive community can radically renew lives wounded by addiction.

“The Eucharist is heaven’s gravity, drawing us home,” said Father McKay, while Johnston added that the bonds formed through the Eucharist counter the isolation that often leads to substance abuse.

“God didn’t create us to be alone,” he said. “And when we witness to one another what God has done in our lives, people find hope, and that’s really what our Catholic faith is all about.”

NEXT: Where does major push to evangelize the young begin? With a party