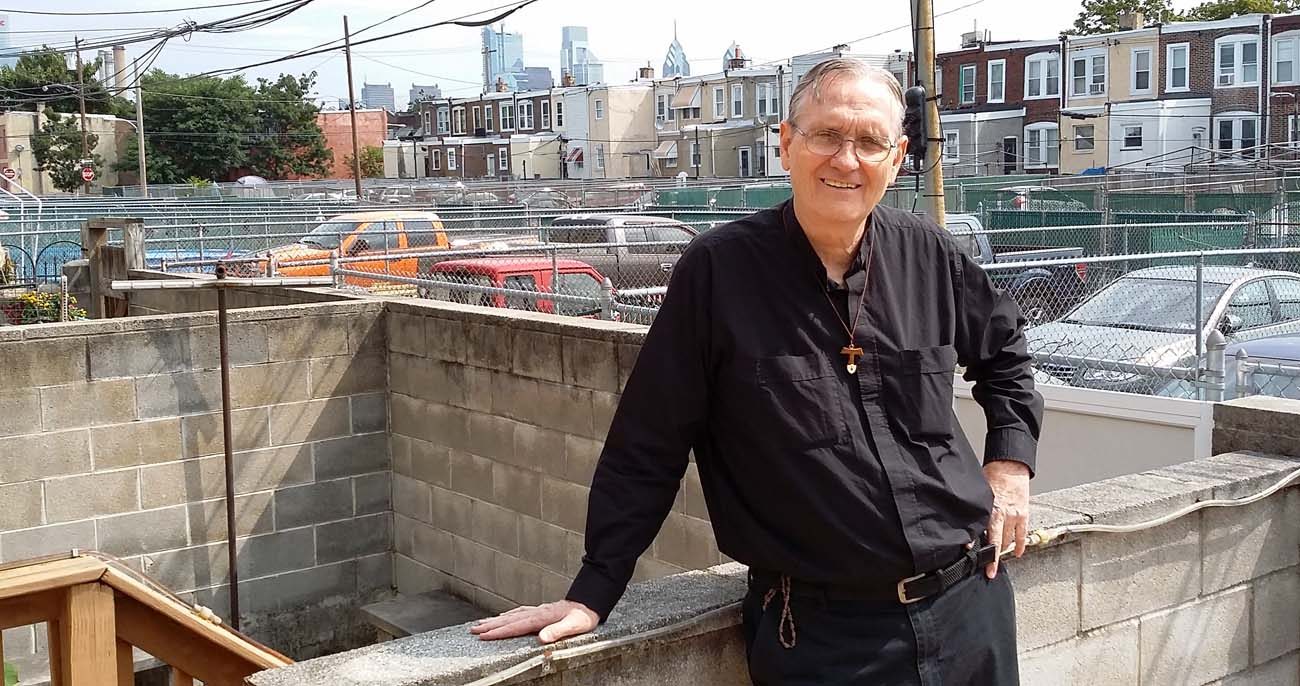 Fifth in a CatholicPhilly.com series, “The Opioid Epidemic: A Catholic Perspective,” on the drug crisis in communities served by the Archdiocese of Philadelphia. Read part one, part two, part three and part four of the series. Listen to our podcasts on spirituality and recovery, on Mother of Mercy House, on a theologian’s view of the issue and on Our House Ministries.

Activists, lawmakers and concerned citizens throughout the Philadelphia area are stepping up efforts to battle the region’s high-profile addiction crisis.

For Father Douglas McKay, the current opioid crisis is the latest battle in a long-running war against addiction. As the founder and chaplain of Our House Ministries in the city’s Grays Ferry section, Father McKay, an archdiocesan priest and native of the neighborhood he serves, has worked with addicted people for more than 40 years.

Our House Ministries — which provides recovery homes and faith-based sobriety programs – was started by the priest in 1997, just two years after his brother Anthony succumbed to an overdose.

Another brother, Harry, had also struggled with addiction after serving in Vietnam, but remained sober for the last 25 years of his life.

(Listen to a CatholicPhilly.com podcast conversation with Father McKay on Our House Ministries.)

An early call to addiction ministry

Father McKay’s call to minister to the addicted began during childhood, when his mother would give him platters of food to take to alcoholics on nearby street corners.

“I would have to wait for the dish and the fork and bring them back,” he said, laughing.

Addiction has long plagued Grays Ferry, a working-class neighborhood initially built around several chemical factories. Parishes such as St. Gabriel, which serves as a pastoral anchor for Our House Ministries, have been instrumental in countering substance abuse throughout the years.

Msgr. John Keogh, a pastor of St. Gabriel during the mid-20th century, served as president of the Catholic Total Abstinence Union of America, a temperance movement founded in 1872. Msgr. Keogh’s mission to promote sobriety attracted the attention of Bill Wilson, the founder of the 12-step program Alcoholics Anonymous, who consulted the cleric on several occasions.

Father McKay, now 66 years old, was blessed as a child by Msgr. Keogh during a block collection house visit, and he “felt a chill.”

Coming home to help the neighborhood 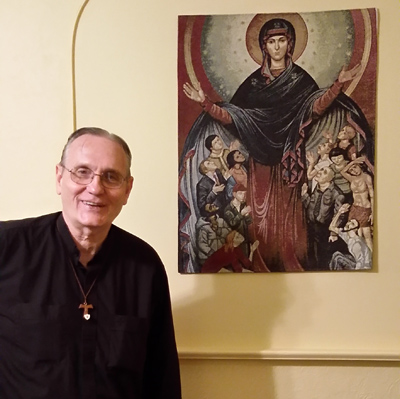 Father Douglas McKay, founder and chaplain of Our House Ministries stands close to a Marian image of Our Lady of Recovery, dedicated to those who struggle with addictions.

The call to priesthood eventually led Father McKay out of the local bar scene and into St. Charles Borromeo Seminary. He was ordained in 1982, and despite various assignments throughout the Archdiocese of Philadelphia, he maintained close ties with the neighborhood he calls “Grace Ferry.”

The archdiocese permitted Father McKay to devote himself to Our House Ministries on a full-time basis, although the project itself is independently supported by donations. Father McKay now lives in one of the five row homes owned by the ministry on South 29th Street, across from St. Gabriel Church.

In assisting those suffering from addiction, Father McKay emphasizes prayer, fellowship and the sacraments, particularly the Eucharist and confession.

“They heal,” he said. “The divine physician is the doctor for the mind and the soul.”

Mass is celebrated on weekdays in one of the ministry’s three chapels, two of which are named after the parish patron’s fellow archangels, St. Michael and St. Raphael. The third chapel is dedicated to Venerable Matt Talbot, an Irish ascetic and recovered alcoholic whose intercession is widely invoked by those seeking to overcome substance abuse.

The Angelus, adoration, benediction and other devotions are also observed daily among the three locations.

The ministry’s recovery homes provide shelter and structure for residents, who must attend Sunday Mass and weekly gatherings of the Calix Society, an international Catholic lay organization for participants in 12-step programs.

Lessons from the Catholic history of abstinence

Father McKay is the national chaplain of Calix, which is headquartered in Glenside and has several local units throughout the Philadelphia Archdiocese, including a chapter at St Gabriel. Founded in 1947, Calix has long provided an effective Catholic response to the scourge of addiction, according to Father McKay.

“It all started over an alcoholic priest,” he explained. 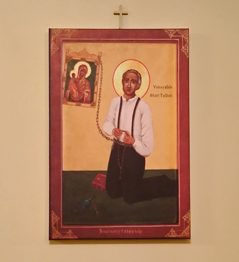 An icon of Venerable Matt Talbot, an Irish ascetic and patron of people struggling with addiction, hangs in one of the chapels at Our House Ministries, a Catholic recovery mission in Philadelphia’s Grays Ferry section.

Frustrated by the priest’s inability to stay sober, five laymen petitioned to have a 5 a.m. daily Mass celebrated in order to pray for his recovery. After several weeks of sacrificial Masses, the priest was able to maintain his sobriety, and the Calix Society — named after the Latin word for “cup” — formed shortly thereafter.

The group focuses on both promoting total abstinence and fostering spiritual development.

“To bring people to the Eucharist is really to bring them to the healing grace of the heart of Christ,” Father McKay said.

Pointing to the tabernacle in the St. Raphael chapel, where the Grays Ferry unit meets, he added, “There’s the remedy; that’s where all the graces flow. That’s what we preach as Catholics.”

Dedicated to a heartbreaking ministry

Over the years Our House Ministries has helped more than 1,000 people on the journey to recovery, Father McKay estimates. While keeping current with medical research on addiction, the priest stresses the need for a compassionate response that treats the soul as well as the body.

“Our churches should be open, especially when they’re in bad neighborhoods,” he said, citing Msgr. James Mortimer, who opened a perpetual adoration chapel at St. William Parish in Northeast Philadelphia while pastor there. “When people asked if he was afraid of something happening, Msgr. Mortimer said, ‘We’re not protecting the Blessed Sacrament. The Blessed Sacrament is protecting us.’” 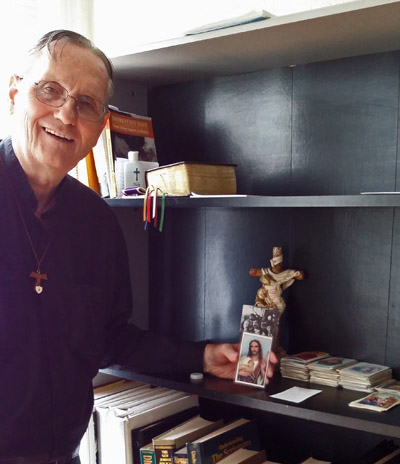 Father Douglas McKay displays the funeral prayer cards he has kept of the many friends and family who have succumbed to addiction, and for whom he still prays on the anniversary of their deaths.

Father McKay is also adamantly opposed to safe injection sites, which have been suggested by some activists as a means of preventing overdoses and deaths.

“We forget that if one person suffers, we all suffer,” he said. “So if you’re letting that injection go in that person’s arm, it not only goes in his arm, but in the Lord’s arm, my arm, a kid’s arm, society’s arm.”

Although his ministry can be a heartbreaking one, Father McKay remains steadfast in his devotion.
“You can see the image of God in the addicted, and you can love them,” he said. “Addiction is overwhelming; it’s powerful. But Christ is more powerful.”

NEXT: Pray for men entering formation as permanent deacons