Coronation fit for the queen of heaven at Doylestown shrine 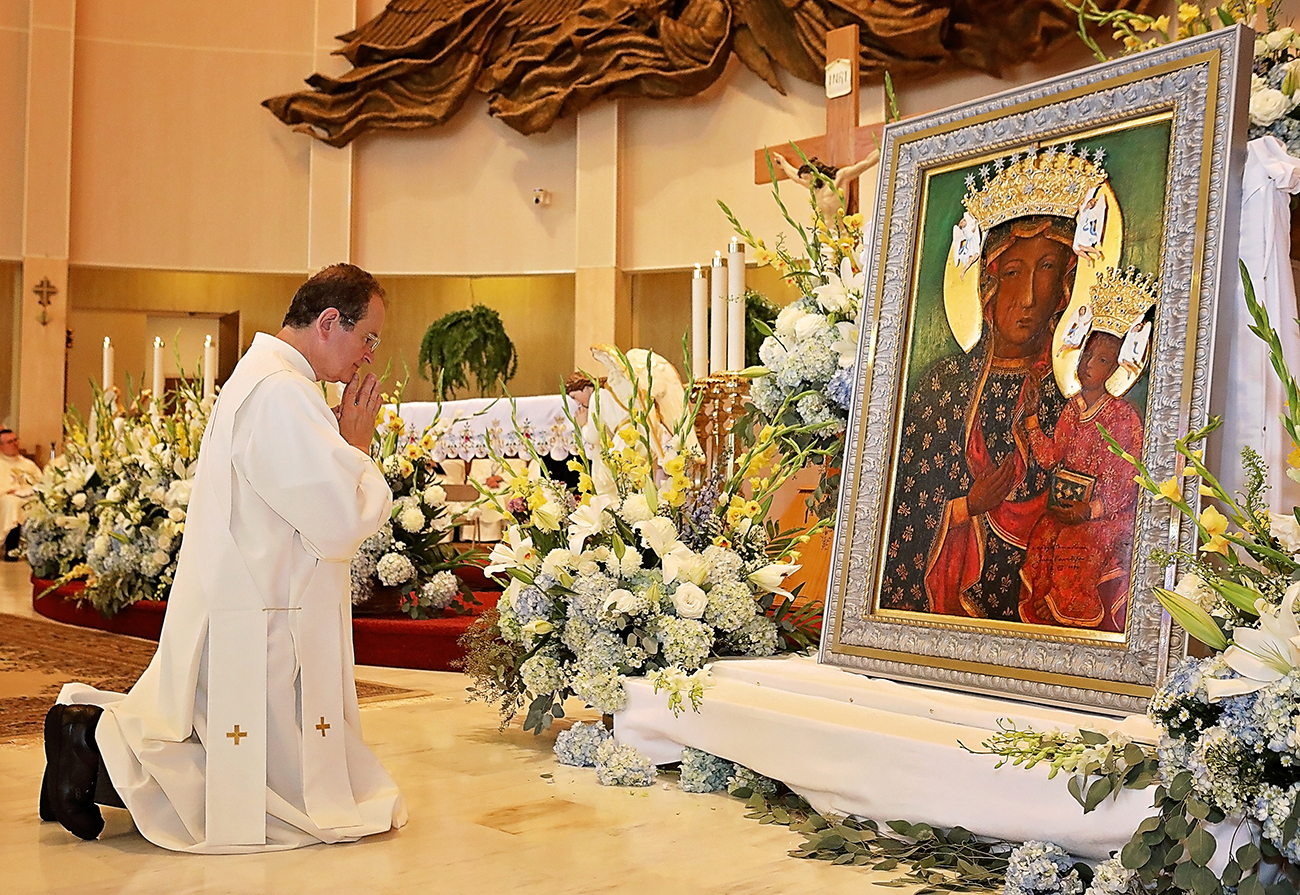 Overflow crowds filled the main church of the National Shrine of Our Lady of Czestochowa in Doylestown on Aug. 25 as pilgrims from far and near honored Mary during a coronation of her image.

The ceremony took take place during the 12:30 pm Mass, which was celebrated by Archbishop Charles Chaput, with Archbishop Thomas Wenski of Miami serving as homilist.

The shrine’s icon is a reproduction of the original image of Our Lady of Czestochowa, which is housed in Jasna Gora in Czestochowa, Poland. The American icon was originally blessed and signed by St. John Paul II during his papacy. As Cardinal Wojtyla, the pontiff visited the shrine during the Eucharistic Congress of 1976.

The crowns used in the Aug. 25 coronation were blessed by Pope Francis in St. Peter’s Square at the Vatican on June 12.

The day began with the “Oratorio of God’s Mercy” performed in Polish by the St. John Paul II Parish Choir from Lombard, Ill. Various devotions in both English and Polish also preceded the Mass and coronation.

In his homily, Archbishop Wenski addressed Archbishop Chaput, telling him that the Polish community was honored by his presence at the coronation, which stressed Mary’s role “as our queen, but also as our mother.”

He noted that the ceremony reminded the faithful that as Mary’s children, “we should aspire to win the crown of eternal life by taking to heart her words at the wedding feast of Cana: ‘Do whatever He (Jesus) tells you to do.’”

Following the Mass and coronation, Archbishop Chaput said that he was “deeply grateful” to the Pauline Fathers for staffing the shrine, and for providing a “good example of Marian devotion and fidelity to the church.”

Archbishop Chaput also expressed his gratitude for the church in Poland, observing that it “continues to be a sign of faith in the midst of a very, very secularized Europe.”

(Related: Watch the full video of the Mass and coronation, courtesy of the National Shrine of Our Lady of Czestochowa.)

“There’s all kinds of pressure from the different parts of the world for Poland to give up its Catholic identity,” he said. “And you and your ancestors, those of you who are Polish, have given a very good example of the resistance of that secularism, and we’re deeply grateful to you for that gift. It’s so necessary in today’s world.”

Father Tadeusz Lizinczyk, the Provincial of the Pauline Fathers and Brothers in the United States, echoed this sentiment in Polish, “Niech żyje Polska!” He then introduced several young pilgrims who presented flowers to Archbishops Chaput and Wenski.

In honor of the coronation, Pope Francis, has granted under the usual conditions a plenary indulgence to all pilgrims who visit the Shrine from May to October. More information about the indulgence is available on the shrine’s website at www.czestochowa.us/coronation.