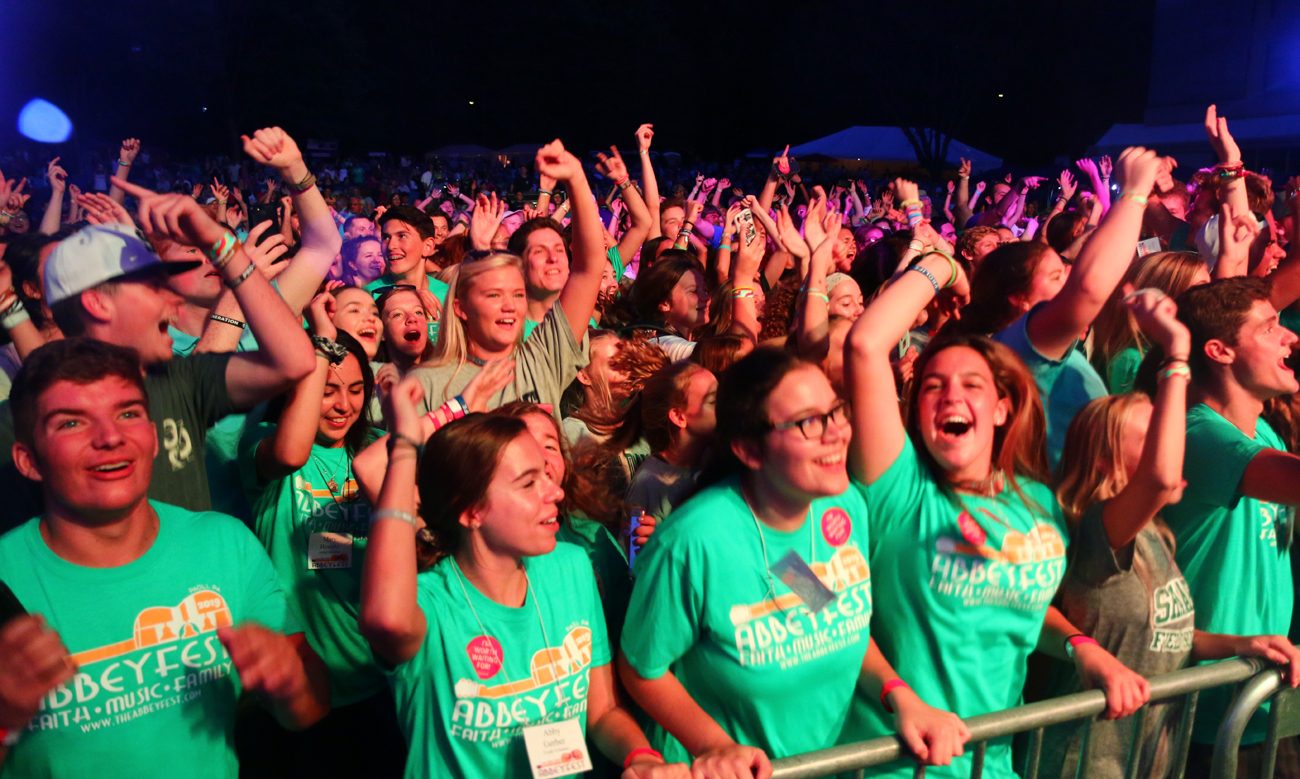 Festival-goers cheer a band rocking the crowd of some 4,000 at AbbeyFest, Sept. 21 in Paoli. (Sarah Webb) 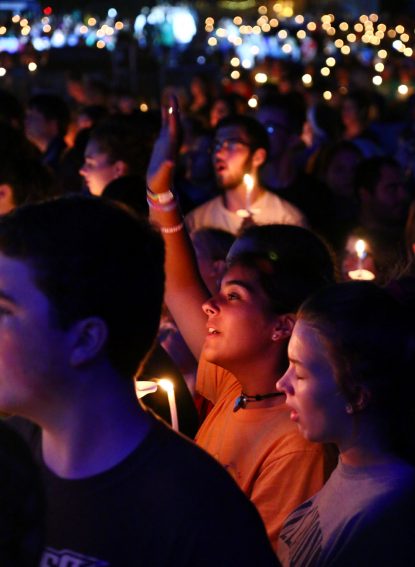 Young Catholics pray and sing together by candlelight at AbbeyFest. (Sarah Webb)

From the moment the more than 4,000 people began arriving for the sixth annual AbbeyFest last Saturday, Sept. 21 at Daylesford Abbey in Paoli, they heard music emanating from the festival grounds.

Matt Maher and Mac Powell and the Family Reunion co-headlined and graced the stage along with Hannah Schaefer, Father Rob Galea and Joe Melendrez to praise God and draw people to the heart of Jesus and one another through the gift of music.

“It’s just a great day. It’s beautiful to see all these Catholics together just having fun and living their Catholic faith,” said Stacie Martinez, a mother and business owner who has attended every AbbeyFest event.

Faith and fun abounded in every corner of AbbeyFest. Temperatures in the 80s reminded festival-goers that summer was not quite over. As they arrived at the abbey they were immediately met by countless smiling volunteers directing traffic, checking in attendees and serving wherever needed.

Hannah Schaefer kicked off the musical festivities, followed by Mac Powell and the Family Reunion.

Bright, sunny skies welcomed families and friends as they set up chairs and blankets on the spacious, grassy area facing the stage.

(View 43 photos of scenes from this year’s AbbeyFest in our Photo Feature, here.)

Numerous vendor tables, lined along both sides of the road that wrapped around the concert area, reflected this diversity. There were multiple religious orders, media outlets such as KLove, ETWN and Relevant Radio, clothing and accessory designers, service organizations, Amigos de Jesus, artists, schools, and Catholic outdoor camps, to name a few.

Stacie Martinez and her husband John brought their family-run apparel, graphics and printed products company, Proud Catholic Company, to AbbeyFest for the sixth consecutive year. They are dedicated to using their talents for the new evangelization. 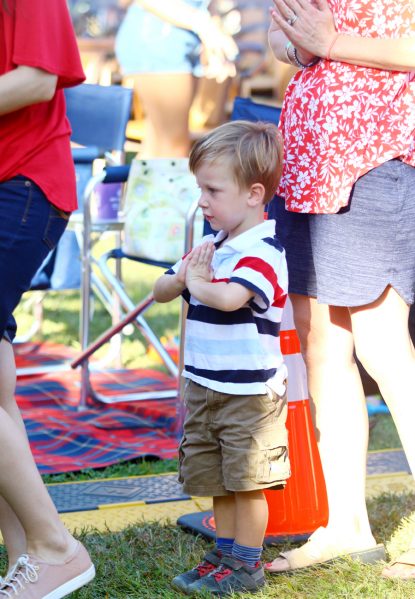 “Of course Mass is the highlight of the day,” said Martinez, a sentiment that was echoed by other attendees.

The Abbey grounds, previously bustling with commotion, became almost silent around 4 p.m. as nearly everyone gathered for Mass.

The AbbeyFest stage was transformed into an outdoor altar. The grass lot in front of the stage filled with people sitting on lawn chairs and blankets, waiting to participate in the celebration. Vendor tables shut down as those manning their stations faced the altar.

A multitude of priests were present to celebrate the Mass, and especially to distribute holy Communion to the thousands in attendance. Firehill Worship from St. Norbert Parish in Paoli provided music for the Mass, and the crowd sang along with lyrics projected on large screens.

Father Rob Galea served as a vibrant homilist, driving home the message of relying on God instead of our own strength.

As Mass came to a close, those in formation for religious life and the seminarians in attendance were invited up to the stage for a special blessing, as were those open to a call to religious life or the priesthood.

The power of prayer and the sacraments flowed throughout the day. Confessions were heard by various priests and healing prayer was available for all in attendance.

The dynamic Father Galea, a priest of the Diocese of Sandhurst in Australia, returned after Mass to share his gifts as a singer and speaker. Joe Melendrez followed with a hip-hop energy that lit up Daylesford Abbey even as the night sky darkened.

Matt Maher was the final musician to take the stage, and he had the honor of preparing the crowd for eucharistic adoration.

“It’s just extra special to end with such a beautiful adoration outside at night with candles, said Martinez. “It’s just gorgeous and our kids love it.”

As they did earlier in the day for Mass, thousands gathered to adore Jesus in the Blessed Sacrament. AbbeyFest was illuminated as candles were given out and lit one by one. Those with lit candles offered to light their neighbor’s.

From the stage Maher told the crowd, “We’re gonna sing. We’re gonna pray. There’s gonna be some times of silence. If you’re here and you’re young I know you get distracted. You can just say the name of Jesus over and over again in your heart. Each and every one of us has a divine appointment tonight with the Son of God. He has something special that he wants to say to each and every one of us.”

Songs of praise rose as the Eucharist was processed under a canopy through the candlelit crowd as incense perfumed the air. The Blessed Sacrament was placed on the stage as all eyes gazed upon it.

As the music stopped to make time for silent adoration, in a crowd of thousands all that could be heard were the sounds of nature, which sang as man was silent.

“And bring whatever’s going on in your life tonight,” said Maher. “(God) wants to hear from you. But more importantly, God’s desire is that you would hear from him.”

After prayers rose through more singing and the Divine Praises, AbbeyFest concluded with joyful music. Maher led the crowd in songs focusing on the resurrected Christ, such as “Because He Lives.”

St. Norbert parishioner and Camp Veritas executive assistant Maggie Watkins, said she will definitely be back at AbbeyFest again for the fourth time next year.

Her favorite part of AbbeyFest is “just seeing people and a huge gathering of Catholics that are coming together to celebrate the fact that they’re Catholic and drawn together by the gift of music.” 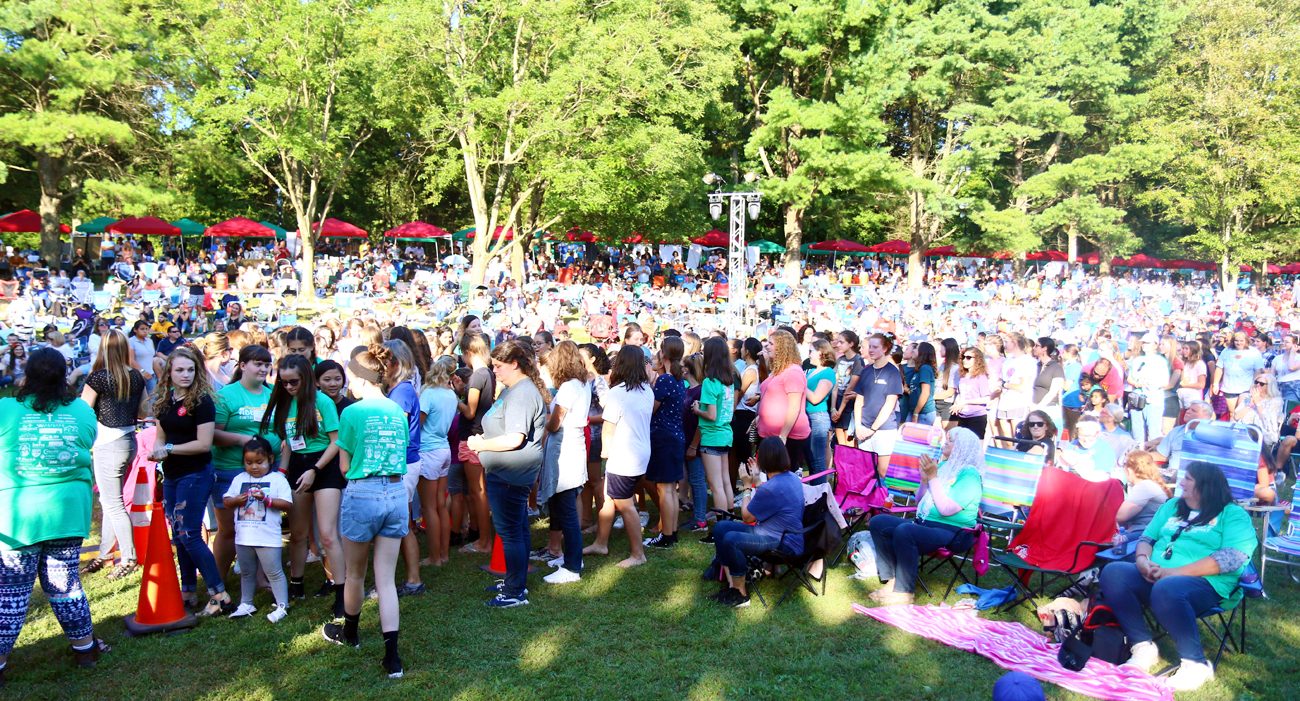 NEXT: Once a refugee, he helps those in search of a better life