Young adults learn about prayer and its obstacle, distraction 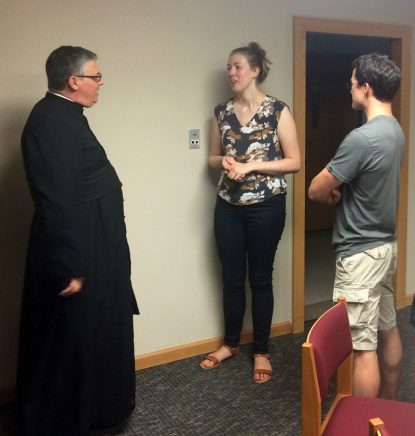 Members of Catholic Young Adults of Chester County chat with Father Carl Gismondi, F.S.S.P., during his visit with the group Aug. 28 at SS. Peter and Paul Parish, West Chester. (Photo by Dan McCarty)

The basics of prayer and a major obstacle to it was the theme of a talk at a recent meeting of the Catholic Young Adults of Chester County (CYACC).

Father Carl Gismondi, F.S.S.P., pastor of St. Mary Quasi Parish in Conshohocken, spoke to the group of about 20 people, mostly in their 20s and 30s, about “The Strength and Power of Prayer” Aug. 28 at SS. Peter and Paul Parish Center in West Chester.

The priest reviewed the fundamentals of prayer and their historical development in the church. He also talked about the different forms of prayer, how prayer is different from “talking” to God and why praying should be such an important part in the everyday lives of Catholics.

It always takes some time to plan these events, usually about one or two months.

CYACC plans carefully for suitable speakers for their meetings, held usually every one or two months. Kristina Stark and Levi Keane, members of CYACC, had heard Father Gismondi give poignant and meaningful sermons at St. Mary’s, which celebrates the Mass in the Extraordinary Form in Latin at the Conshohocken church, so it seemed appropriate for them to invite him to speak about prayer.

Stark, a member of St. Agnes Parish in West Chester, said she thought the priest “could really connect to this group.”

Father Gismondi said he was honored to come and spend time with this group of young adults.

“We have young people who want to go deep in their faith,” he said. “It’s really good. Prayer is hard.”

Father Gismondi said that in his experience, people learning to pray for the first time find it very similar to learning a foreign language. It comes harder for some than for others. For some people, it takes years of learning before they are comfortable with a new language. It takes effort.

“God is always there to listen,” said Father Gismondi.

A simple definition of prayer is that it is the raising of heart and mind to God. The person at prayer spends time talking to God, who wants us to share friendship with him. Just as how one cannot have relationships with friends without speaking to them, the same holds true when connecting with God. 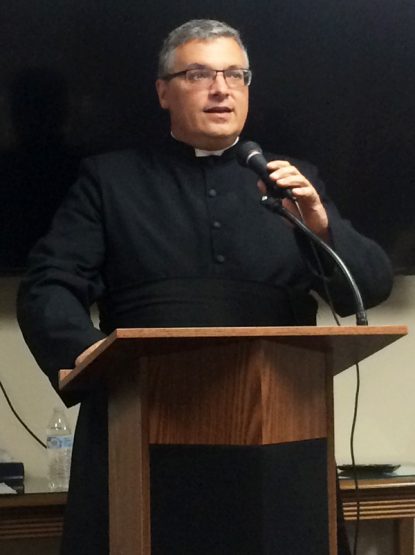 Father Gismondi talked about three types of prayer: vocal prayer, meditation and recollection. Vocal prayer, the basis of the prayer life, is written out for us. Even when we pray silently, it remains vocal. Through meditation we use our thoughts, memory and imagination to elevate our hearts and minds to God. Recollection is different from meditation in that one focuses on Christ dwelling in our hearts and recalling that he is in us at all times.

“All three types of prayer are open to all of us,” said Father Gismondi.

The final part of his talk focused on distractions, which may arise frequently in one’s imagination and memory while at prayer. While it is not easy to control the imagination, it is necessary to put it in the proper place. We should train it so that it will become a lesser function of our mind, Father Gismondi suggested.

“We’re designed to be able to do things on autopilot,” he said.

God favors our intentions for prayer as long as we truly intend to pray. While it is better if we can overcome distractions, God always respects are desire to pray if that is a sincere intention on our part. Father Gismondi advised putting down one’s cell phone or taking a break from social media for regular periods of spending real quality time with God, even if briefly.

“We need a rest from the material world,” said the priest. “We think too much of worldly things that we need to get rid of, even for a few minutes.”

He concluded his talk with the basic reminder that prayer is essentially talking with God.

In the short question and answer session that followed, Maggie Watkins, a parishioner of St. Norbert’s in Paoli, asked for prayer and reading recommendations for people at different levels. Father Gismondi suggested reading books written by saints and those being considered for sainthood. Among them are “Conversation with Christ” by Peter T. Rohrbach, “The Way of Perfection” by St. Teresa of Avila and “Introduction to the Devout Life” by St. Francis de Sales. He recommended 10 meditations that people could use to enter into prayer.

Laura Lara of St. Agnes Parish was curious about how beginners can put Scripture to good use. Father Gismondi’s first thought, he said, was to make an Act of Contrition before reading the New Testament to become familiar with the Gospels.

Several people that came out for the evening had heard Father Gismondi speak before, such as Meredith Wilson, a member of St. Mary’s in Conshohocken.

“I thought it was really easy to remember how everything was said,” said Wilson. “I always feel really built up.”

CYACC’s next event is Sept. 18 when the group gathers members and any guests, ages 20-35, for an evening of games and fellowship at East Goshen Park in Chester County.

Learn more about Catholic Young Adults of Chester County at CYACC.org. Discover four other local groups for Catholic young adults as well as Anthem, the youth and young adult ministry of the Archdiocese of Philadelphia.

PREVIOUS: British lawmaker to speak in Malvern on Catholic identity

NEXT: Archdiocese invites faithful on pilgrimage to Mary’s shrine