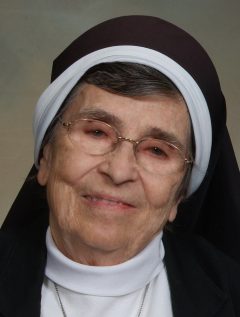 Sister Mary Bernarda Arkatin, O.S.B.M., died July 17 at the Basilian monastery in Philadelphia’s Fox Chase section at the age of 96. She had suffered a stroke on July 4 and was treated at Holy Redeemer Hospital. On July 8 she returned to the Basilian Motherhouse in Fox Chase.

She died surrounded by the love, support and care of sisters at the motherhouse, friends and colleagues with whom she had shared a home, a spiritual life, work, meals and leisure time for many years.

Sister Mary Bernarda was born on December 23, 1922, in Chesapeake City, Maryland, to Mary and Gregory Arkatin. She was one of 12 children, including a sister who also entered the Order of St. Basil the Great, Sister Sophia Tharsilla Arkatin, O.S.B.M., who predeceased her.

Sister Mary Bernarda graduated from St. Basil Academy in 1938 and entered the congregation on June 13, 1940, pronouncing her final profession on Aug. 23, 1949. From the start, her commitment was to give herself wholly and entirely to God without looking back.

After entering the Basilian community, she earned a bachelor’s degree in education from Seton Hall University and a bachelor’s in music from De Paul University in Chicago. She taught at schools in New Jersey, Michigan and Illinois before teaching at began teaching at St. Nicholas School in Philadelphia.

Sister Mary Bernarda’s work in education began in 1934 and ended in 2014. During these nine decades she also held leadership positions as a provincial councilor within the Fox Chase Basilian community and as school principal.

She also organized an outstanding orchestra at almost every educational institution in which she worked, teaching her students to play a wide assortment of instruments, composing variations of original works and presenting them at parish concerts. She encouraged her students to embrace their liturgical and ethnic culture.

Sister Bernarda was also assigned to serve as promoter for the cause of the beatification of Metropolitan Archbishop Andrew Sheptytsky in 1993 and continued this ministry until 2000. Traveling year round she spoke on this matter at various churches and before various organizations throughout the United States and Ukraine, extolling Metropolitan Sheptytsky’s saintly life, his ecumenical endeavors and dynamic leadership skills in his dealings with God’s people.

As the daughter of an orphaned father, Sister Mary Bernarda also committed herself to loving, supporting and negotiating care for the poorest of the poor in Ukraine, her parents’ homeland.

Sister Mary Bernarda’s life was a living witness to the love of Christ. During her 75 years as a Sister of St. Basil the Great, she honored this commitment, thanking God each day for the blessings he granted her and for the privilege of serving Him. Having experienced the love of Christ in her own life, she shared that wondrous experience of Christ’s love with thousands of orphans, invalids, mentally handicapped and marginalized people, her actions always speaking louder than words.

The Parastas for nuns was celebrated by the Metropolitan Archbishop Borys Gudziak, Msgr. Peter Waslo and Father John Ciurpita on July 19. The following day Bishop Rev. Andriy Rabiy officiated at the Divine Liturgy and burial service, with Fathers Ciurpita and Edward Higgins assisting. She was buried at the sisters’ cemetery adjacent to the Basilian Motherhouse in Fox Chase.

Sister Mary Bernarda Arkatin’s mortal remains now rest beside those of the other Sisters who have already left this world, at the Sister’s cemetery adjacent to the Basilian Motherhouse in Fox Chase.