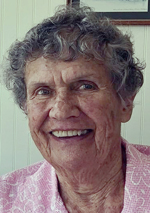 She attended Little Flower High School and was a graduate of the class of 1946. She entered the Medical Mission Sisters (MMS) in 1949, making her first profession of vows in 1951 and her final profession in 1957. After joining the congregation, she attended Trinity College in Washington, D.C. and became certified as a medical technologist at Nazareth Hospital in Philadelphia.

Her first mission assignment was to Holy Family Hospital in Karachi, Pakistan, where Returning to the United States in 1974, Sister Marie began ministry in Wallace, North Carolina, where she worked on a primary health care/community development project. She earned a B.A. in sociology at the University of North Carolina at Chapel Hill in 1977 and worked with the Diocese of Savannah in St. Mary’s, Georgia, and in Fernandina Beach, Florida. In 1986 Sister Marie graduated from Temple University with her master’s degree in education/psychology.

In 1980, Sister Marie spent several months aiding Cambodian refugees in Thailand and moved from there to Philadelphia where she ministered in several departments at her society’s North American headquarters in Philadelphia in addition to serving as a hospice volunteer. She later helped to manage a women’s shelter in St. Petersburg, Florida, and served as membership coordinator for her society. Sister Marie spent 12 years working in the Connections Job Development Program in New Port Richey, Florida.

Sister Marie returned to Philadelphia in 2010, where she continued to serve as membership coordinator. She also continued her hospice work, in addition to visiting with the elderly and people suffering from illness. Once a week, she visited women at Interim House, a residential program for formerly incarcerated women recovering from prison, prostitution, drugs or alcohol.

In 2019, Sister Marie moved to Holy Redeemer Lafayette, a retirement community. She was on vacation with Sister Joan Foley, M.M.S., in Jacksonville, Florida when she passed away unexpectedly.

NEXT: Sister of Mercy Mary Berenice Eltz dies at 103