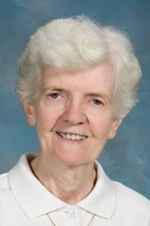 The daughter of the late James and Winifred Sweeney, she attended

Sister Ann ministered in the Archdiocese of Philadelphia and the dioceses of Allentown, Arlington, Camden, Harrisburg and Trenton.

She is the sister of the late James, Joseph, Charles, Francis, Mary Lynch, Margaret Kemp, Regina Glackin, Winifred Tierney and Sister Grace Sweeney, S.S.J. She is survived by nieces, nephews, grandnieces, grandnephews and members of her congregation, the Sisters of St. Joseph.

The funeral Mass was celebrated Aug. 19 at St. Joseph Villa.