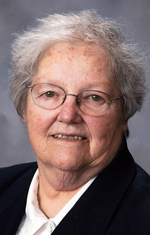 Sister Joan Mary Gibbons, I.H.M., died Aug. 8 in Camilla Hall, Immaculata at the age of 84. She was in the 66th year of her religious life.

Formerly Irene Gibbons, she was born on June 15, 1935 and raised in St. Edmond Parish in Philadelphia.

From this point on, Sister Joan served tirelessly in Philadelphia, Reading and Coatesville as an elementary grade teacher. In 1995 Sister Joan went to St. Gabriel School in Philadelphia where she remained until 2015. From 1995 to 1999 she taught sixth grade; from 1999 to 2014 she served as a staff member in the Computer Science Lab, after which she served as an office assistant until 2015.

In August 2015 Sister Joan joined the community of Camilla Hall where she served as a member of the Apostolate of Prayer.

Her parents John and Catherine (McCarron) Gibbons, her brothers John (Margaret), Francis (Anna May), James (Catherine), and her sister Catherine Kelly (Walter) predeceased Sister Joan Mary. She is survived by her sister Joan Rickabaugh and many nieces, nephews, grandnieces, grandnephews and her congregation of I.H.M. sisters.

The funeral Mass was celebrated Aug. 13 at Camilla Hall. The celebrant and homilist was Father William E. Dean.

NEXT: Sister Rose McHale dies, was nurse at Camilla Hall for 43 years