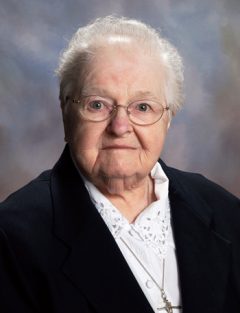 Alice Gleason was born in Philadelphia and entered the congregation of the Sisters, Servants, of the Immaculate Heart of Mary on Sept. 8, 1950. She received the habit of the congregation on March 26, 1951, taking the religious name Sister Regina Cordium. She professed first vows on April 5, 1953.

From this date forward, Sister Alice’s professional ministry spanned service as both an elementary and a high school teacher. She served in Newtown Square; Ashland, Pa.; and Philadelphia. From August 1993 through August 2004 she was the director of development at St. Hubert High School, after which she served as development consultant.

In August 2016, Sister Alice continued to serve wholeheartedly in the Apostolate of Prayer until her death on July 21, 2019 in her home at Camilla Hall.

She is survived by members of her I.H.M. community, her sister-in-law Violet (Vi) and many loving nieces, nephews, grandnieces, and grandnephews.