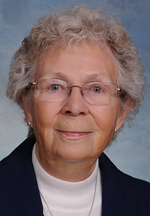 Sister Barbara Ann Lucas, O.S.F. (formerly Sister Eleanor Marie), 81, died July 26 in Assisi House, Aston. She had been a professed member of the Sisters of St. Francis of Philadelphia for 58 years.

She was born in Philadelphia where she was a member of St. Matthew Parish and a graduate of Hallahan High School. She entered the congregation in 1957 and professed her first vows in 1960.

Sister Barbara earned a BA in English from Neumann University. She ministered primarily in education and spiritual ministry.

Sister Barbara ministered for 38 years in the Archdiocese of Philadelphia. She taught at St. Benedict School and St. Elizabeth School, both in Philadelphia, and at St. Francis de Sales School in Lenni. She later served as chaplain at St. Mary Medical Center in Langhorne.

She also served as vocation director for the former Immaculate Conception Province of the Sisters of St. Francis which was based in Philadelphia. In later years she served in spiritual ministry in the Abode of Light in Doylestown and volunteered at both Assisi House in Aston and Anna’s Place in Chester.

Upon her death Sister Barbara requested her body be donated for education and science. She is survived by her Franciscan family. Donations in her name can be made to the Sisters of St. Francis Foundation, 609 S. Convent Road, Aston, PA 19014.