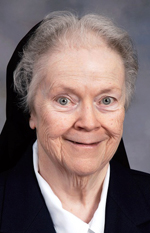 Sister Rose Immaculate McHale, I.H.M., died Aug. 17 in Camilla Hall, Immaculata. She was 79 and in the 62nd year of her religious life.

Formerly Dorothea McHale, she was born Oct. 7, 1939 in Ashland, Pa. and her home parish was St. Joseph in Ashland.

She entered the Sisters, Servants of the Immaculate Heart of Mary on Feb. 11, 1958, receiving her habit and religious name, Sister Rose Immaculate, on Aug. 15, 1958. Sister Rose professed her first vows on Aug. 16, 1960. From this point on, she served as an elementary school teacher from August 1960 through August 1969.

Sister Rose earned her LPN degree from Lankenau Hospital and from August 1969 through August 2012 she served the Immaculate Heart Sisters at Camilla Hall with compassion and care.  In August 2012, Sister Joan joined the ranks of sisters in Camilla Hall who serve faithfully in the Apostolate of Prayer and Service.

Sister Rose’s parents John and Mary Rita (Campbell) McHale, her brother Peter (Sue), and her sisters Margaret, Mary Anne, and Virginia. predeceased her. Sister Rose is survived by her brother John (Rita), many nieces, nephews; grandnieces, grandnephews, and her congregation of I.H.M. Sisters.

NEXT: Sister Barbara Newton dies, recalled for love of nature