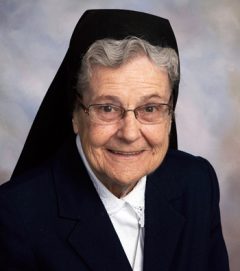 Sister Theresa Gmeiner, I.H.M. (formerly Sister Martin Marie), died Aug. 22 in Camilla Hall, Immaculata. She was 87 and in the 70th year of her religious life.

She was born in Philadelphia and entered the Sisters, Servants of the Immaculate Heart of Mary on Sept. 8, 1949 from Good Shepherd Parish in Philadelphia. She received her habit and her religious name, Sister Martin Marie, on April 10, 1950, and professed her first vows on April 13, 1952.

For most of Sister Theresa’s professional life, she served as an elementary grade school teacher in Philadelphia, Reading, Falls Church (Va.), Somerville (N.J.), Primos and Bensalem. In 1997, she served as pastoral minister at St. Mary Manor, Lansdale. Sister Theresa rounded out her years of service to God and community as a resident of Camilla Hall where she was an active member of the Apostolate of Prayer from August 2011 until her death.

Sister Theresa was predeceased by her parents Ambrose and Cecelia (Ficchi) Gmeiner, her sister Rita Algeo (Hugh) and her brother-in-law Raymond Kistler.

She is survived by her brother Leonard (Patricia), her sister Philomena Kistler and many nieces, nephews, grandnieces, grandnephews and her congregation of I.H.M. Sisters.

The funeral Mass was celebrated Aug. 27 at Camilla Hall. The celebrant was Father William E. Dean.

NEXT: Sister Ellen Cavanaugh dies; was leader in volunteer ministries