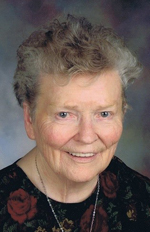 After teaching elementary school at St. Denis School in Havertown, Sister Ellen served as principal of St. Barbara Day School for special needs students in Philadelphia. Next she ministered in several roles in the formation of young sisters including director of vocations and pre-entrance program.

In 1977, Sister Ellen became the first director of Mercy Volunteer Corps, a position she held for 10 years. She later became executive director of the Catholic Network for Volunteer Services in Washington, D.C.

Sister Ellen was known locally and internationally for her ministry in volunteer services. Pope John Paul II awarded her the Pontifical Honor of the Cross and the Archdiocese of Philadelphia awarded her the SS. John Neumann and Katharine Drexel Award for this innovative work.

She also worked for several years on evangelization efforts for the archdiocese.

A gracious spirit, gentle and welcoming to all, Sister Ellen was humble and unassuming. Her legacy lives on in her family, community and all those whose lives she touched.

She is predeceased by her parents Thomas and Bridget, her brothers Thomas and (Rev.) Daniel, and sisters Mary (Bradley), Elizabeth (Kelly), Ursula (Tomany) and Theresa (Glenn). In addition to her religious community, Sister Ellen is survived by her sister, Pat (Hickey-Breen), many nieces, nephews, grandnieces and grandnephews.

The funeral Mass was celebrated Aug. 30 in the Chapel at the Convent of Mercy, Merion. Burial was the following day in the community cemetery.

Contributions in Sister Ellen’s memory may be sent to the Sisters of Mercy Mid-Atlantic Community, 515 Montgomery Avenue, Merion Station, PA 19066.