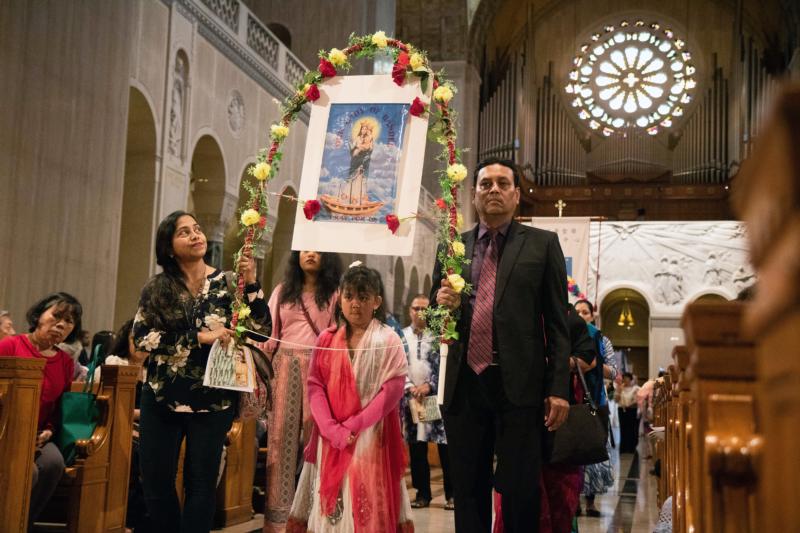 Worshippers carry an image of Mary and the Christ Child during the annual pilgrimage of Asian and Pacific Island Catholics at the Basilica of the National Shrine of the Immaculate Conception in Washington May 4, 2019. There is a growing presence of Asian and Pacific Island Catholics in the U.S. — a population of close to 3 million. (CNS photo/courtesy Archdiocese of Washington)

The apparition stories of the Virgin Mary in Asia stem from a deep devotion to her by persecuted Catholics. These apparitions have occurred in several Asian countries where Catholicism was introduced.

Since there are many, attention will be given to Our Lady of La Vang (Vietnam) and Our Lady of Donglu (China). Both apparition stories occurred after people prayed to Mary for protection from religious persecution. Interestingly, both stories are connected by how Mary is physically depicted with Asian features.

The apparition of Mary at La Vang occurred in 1798 during the Tay Son rebellion. People fleeing from the province of Quang Tri hid in a nearby forest. She appeared to them as a beautiful lady holding a baby. She consoled them and promised to always help.

The people erected a tiny altar on the site that had become a safe place. She appeared several more times during that period. After this persecution, starting in 1882 many pilgrims traveled to La Vang. By 1901, a new church was erected. It was destroyed in 1972 during the war. The church’s restoration began in 1985.

In the late 1990s a new statue of Mary dressed in the traditional “ao dai” and headgear with Vietnamese physical features was installed replacing the European-looking Our Lady of Victory of France that represented Our Lady of La Vang in the previous decades. It took some time for people to accept the Vietnamese Lady of La Vang but now her image is lovingly embraced in Vietnam and throughout the world.

Our Lady of Donglu, also known as Our Lady of China, was made more popular during the Boxer Rebellion of 1899 to 1901. She helped protect Catholic Chinese who were fleeing persecution by the government who wanted to expel foreigners and Christians from the country.

The town of Donglu was heavily populated by Catholics. The people prayed to Mary for protection. She appeared to them and calmed their fears.

Several years after this incident, a painting of Mary as Our Lady of Donglu was commissioned. The artist used the empress dowager Cixi’s likeness as a model for the painting of Mary with the child Jesus. The painting shows Mary and Jesus in traditional Chinese dress with a background of a gothic church building.

This depiction was not immediately accepted by people because of the controversial position of the empress dowager. After several renditions of the portrait, the painting of Our Lady of Donglu was finally embraced by the Chinese Catholics and revealed to the world.

Both of these images of Mary provide the local people as well as those living outside their country an image that represents who they are. She is familiar to them in her traditional dresses and her Asian features. These images of Mary also remind them of the difficulties Catholics had and continue to have in Vietnam and China.

Finally, the Vatican has had an ambivalent history toward officially recognizing Marian apparitions. While church policies allow clerical leaders flexibility in dealing with apparitions, the Vatican itself can initiate its own investigations. The basis for accepting an apparition is evidence of supernatural activity.

Otherwise, the church can either make no decision or indicate no evidence of supernatural activity in the apparition. This does not prohibit the local community from continuing its belief in the apparition.
There has not been an official statement from the Vatican on La Vang or Donglu. Thus, it is still up to the local bishops to approve these shrines.

Faithful Catholics from all over the world continue to make pilgrimage to these apparition sites and pray to the Blessed Mother Mary. Their devotion is a strong witness to her loving intercession.

Father Linh Hoang is a Franciscan priest of the Holy Name Province and an associate professor of religious studies at Siena College in Loudonville, New York. He serves as a consultor to the U.S. Conference of Catholic Bishops Secretariat of Cultural Diversity in the Church.

PREVIOUS: Healing and saving all peoples, God is worthy of praise

NEXT: The new pastoral response to Asian and Pacific Island communities in the U.S.