The new pastoral response to Asian and Pacific Island communities in the U.S. 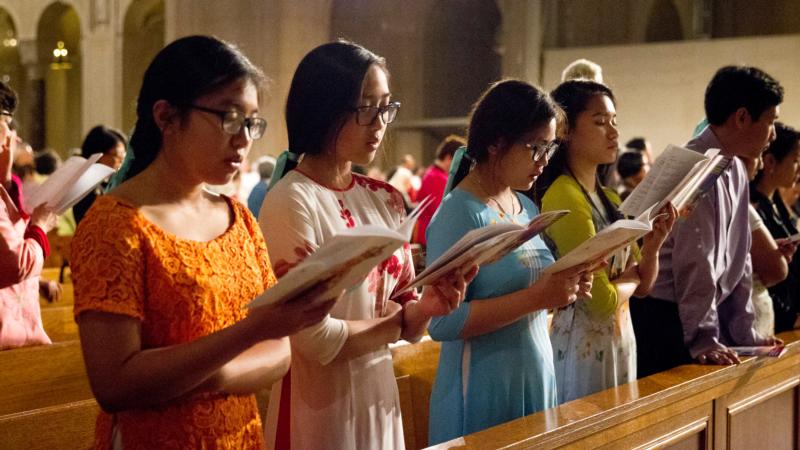 Asian and Pacific Island pilgrims gather at the Basilica of the National Shrine of the Immaculate Conception in Washington for the annual Marian pilgrimage May 6, 2017. In 2018, the U.S. bishops’ put forth a pastoral statement titled “Encountering Christ in Harmony.” Its goal is twofold: “to make Asian and Pacific Island Catholics feel at home, both in the church and in the United States, while being able to preserve the richness of the spiritual and cultural backgrounds that they bring as contributing members of the body of Christ.” (CNS photo/Rhina Guidos)

Paulist Father Joe Scott was presiding over a funeral Mass of a parishioner at Old St. Mary’s Cathedral, San Francisco. He was discouraged to see that only two family members showed up to pay their respects to the deceased.

Later he noticed two Filipinas entering the church. Not knowing about the service, they nonetheless sat at a distance and joined in prayer. At the end of the service, Father Joe mentioned the name of the cemetery where the committal would be taking place.

When he arrived at that site an hour later, he discovered the two Filipinas standing there, awaiting his arrival. After expressing his gratitude, they explained, “This is what we do in the Philippines!”

In 2001, the U.S. Catholics bishops put forth a statement titled, “Asian and Pacific Presence: Harmony in Faith,” that recognized this presence and growth. Since that time, more needs have been discovered and are now addressed in a new pastoral response by the bishops, “Encountering Christ in Harmony.”

Its goal is twofold: “to make Asian and Pacific Island Catholics feel at home, both in the church and in the United States, while being able to preserve the richness of the spiritual and cultural backgrounds that they bring as contributing members of the body of Christ.”

This response addresses the needs of those whose ethnic heritages can be traced to East Asia, including China, Hong Kong, Korea and Japan; South Asia, with India and Sri Lanka; Southeast Asia, including the Philippines, Vietnam and Indonesia; as well as the Pacific Islands, including Hawaii, Guam, Samoa and Tonga.

“Encountering Christ in Harmony” begins with a brief history of Asian and Pacific Island Catholics in the U.S. Racism is also raised as they are often labeled as “not from this country,” “model minorities,” “submissive” or “hardworking.”

Such stereotypes presume that Asian and Pacific Island communities do not experience racism themselves, and unfairly sets them up over and above other ethnic groups.

The pastoral document also underscores that Asian and Pacific Island Catholics are made up of ethnically, racially, culturally, nationally and socially diverse groups of people.

As a means to address these distinctions, the various liturgical and devotional practices are considered, such as the Filipino “Simbang Gabi” (“night Masses” during Advent); the Chinese, Korean, Laotian and Vietnamese Catholic celebrations of the Lunar New Year; and the variety of Marian devotions, such as the feast of Our Lady of Camarin, the most venerated title of Mary in Guam.

Other concerns revolve around the need for Asian and Pacific Island Catholics to remain connected to families and relatives from their countries of origin (transnational ties), the rise of intercultural marriages and resulting tensions when subsequent generations become more immersed in mainstream U.S. culture.

As such, Jesus’ encounter with the Samaritan woman is held up as a paradigm for cultural encounter and dialogue (Jn 4:5-42).

Pope Francis’ 2013 apostolic exhortation, “Evangelii Gaudium” (“The Joy of the Gospel”), proposes that our daily encounters with Jesus are often experienced through encounters with people from other cultures that call us to move beyond ourselves to become better missionary disciples.

As a tool to guide us during such encounters, pastoral suggestions are offered at the end of each section (30 suggestions in all) of “Encountering Christ in Harmony.” Some examples include:

— Directly invite input from Asian and Pacific leaders throughout all stages of planning for any event or encounter, rather than just announce they are welcome at something they have not helped create.
— Provide intergenerational dialogues at national conferences, diocesan seminars and parishes that focus on how each generation approaches the role of parenting, interreligious marriages, and/or any other relevant issue.
— Seek vocations in community and family-based gatherings more reflective of Asian and Pacific Island culture, rather than limiting contact with potential candidates to individual (one-to-one) encounters more reflective of mainstream U.S. culture.
— Promote ongoing formation of intercultural and pastoral skills for all leaders and communities.

The title of “Encountering Christ in Harmony” offers us its core aim: “In the Asian and Pacific worldview, harmony does not mean leveling off differences in order to arrive at consensus at any cost. Rather, harmony includes diversity as a richness to be embraced and nurtured. At the same time, attaining harmony requires never losing sight of our unity in Christ, which is the goal.”

Until all members of the body of Christ feel fully welcome in our communities, the call to reach out continues to be before us. While the pastoral specifically focuses on Asian and Pacific Island Catholics, it is a welcomed resource for anyone engaged in intercultural ministry.

More information can be found here.  For workshops and seminars on this pastoral response, visit here.

Paulist Father Ricky Manalo serves as a consultor for the U.S. Conference of Catholic Bishops Secretariat of Cultural Diversity in the Church. He is a liturgical composer for Oregon Catholic Press and resides at Old St. Mary’s Cathedral, Chinatown, San Francisco.