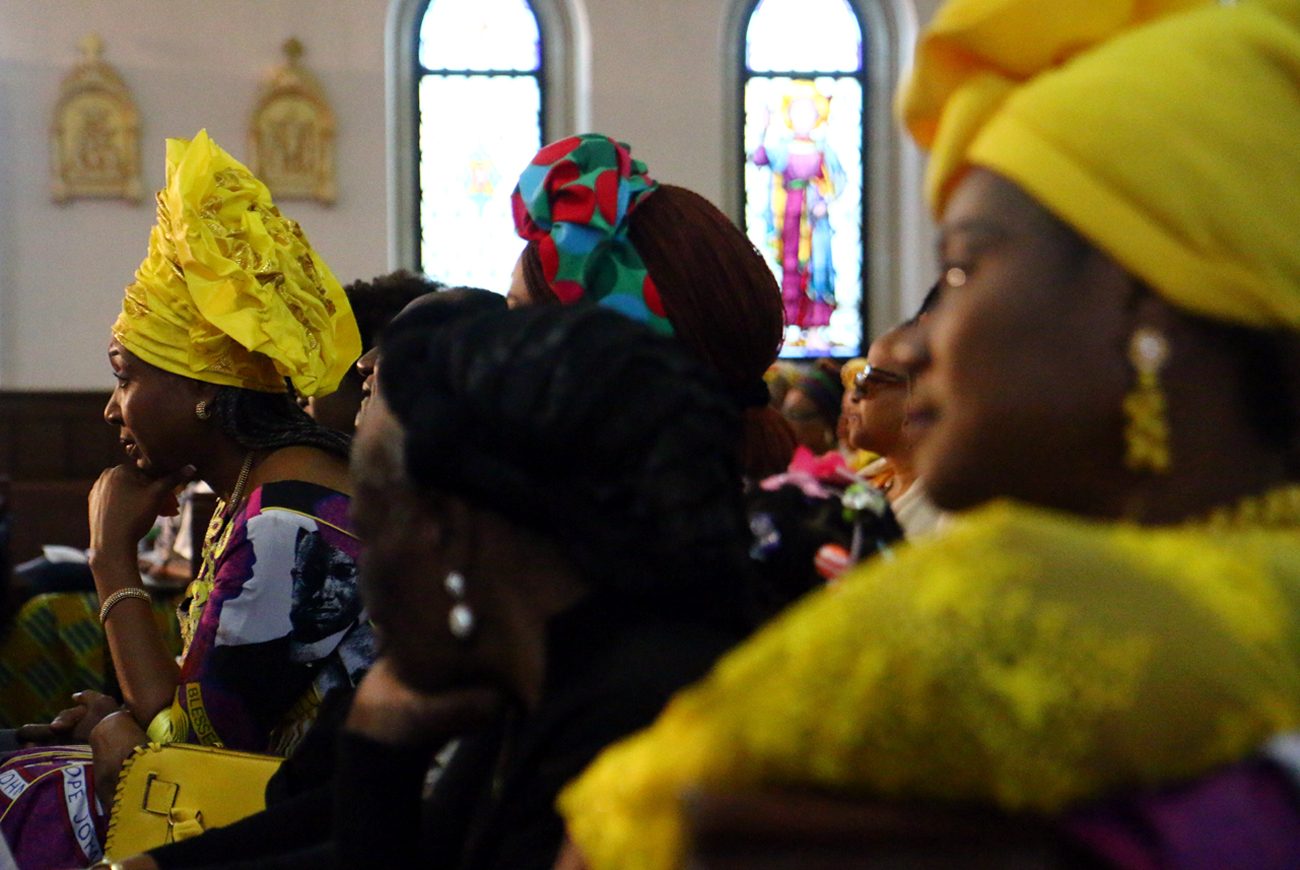 Worshipers at the African Heritage Mass praise God in the liturgy Sunday, Oct. 6 at St. Raymond Church in Philadelphia.

The Philadelphia Archdiocese’s largest gathering of African Catholics drew hundreds dressed in African attire, including some who donned black and white photographs of their cherished saint, for the African Family Heritage Mass on Sunday, Oct. 6 at St. Raymond of Penafort Church in Northwest Philadelphia.

“This is an event that the African Catholic congregations look forward to every year,” said Emmanuel Okoro, coordinator for the Igbo Catholic Community at St. Cyprian Parish in West Philadelphia.

(See a photo gallery of images from the Mass here.)

“Many of us are wearing a patron saint,” Okoro said. “I chose to wear the outfit with St. John Paul II. I have a special devotion to him. Many of those here are from throughout the Philadelphia Archdiocese and Camden. You will see that many of us are wearing different saints.”

For lifelong Catholic Tracey Pugh, who is African American, attending the heritage Mass was a chance to explore her heritage in a religious environment.

“I was invited by a parishioner,” she said. “I wanted to come to explore how the African churches worship. This is my first time coming to this event.”

Sister Florence Enechukwu, a Missionary Sister of the Holy Rosary, was the coordinator of Sunday’s African Mass. In her remarks afterward, she said St. Raymond’s was selected for this year’s Mass because of its commitment to helping refugees.

She drew thunderous applause from the packed church crowd when she noted that the church housed and assisted 10 African refugees. They were from Sierra Leone, the Congo and Tanzania, she said.

“We have those from 21 African countries who live and worship in the Archdiocese of Philadelphia,” Sister Florence said. “This Mass celebrates the sharing of the joy that God gives. This Mass is made possible by many people who work behind the scenes for months.”

Sister Florence, who is coordinator for the archdiocesan Office of Pastoral Care for Migrants and Refugees, then singled out the many groups involved in the annual Mass. She included the young altar servers, the many choirs and musicians, deacons and priests, including St. Raymond’s pastor, Father Christopher M. Walsh, who served as celebrant and homilist.

Before the Mass the Liberian Choir sang “Let Us Come to Jesus My Friend.” The welcome remarks were offered by Eusebio Coelho from Mozambique. Then the readings for the liturgy were proclaimed in Swahili and English. The Prayer of the Faithful was read by people from Malawi, Eritrea, Tanzania and the Congo. Most read in their native tongues.

The Kenyan Choir sang songs for the offertory precession in Swahili as the Ivorian community presented the gifts. The Francophone and Nigerian Igbo choirs also sang during the Mass as well as the recessional hymns.

The Mass was followed by a buffet dinner reception that featured a sampling of dishes from several African countries. Separate tables displayed the food with large signs denoting the name of each country as people lined up for a taste of the cuisine.

On the menu was everything from stewed and fried chicken to crispy rice balls, fried plantains and steamed mixed vegetables.

Among those pleased with the turnout and the reception’s communal spirit was Samuel Abu, coordinator for the archdiocese’s Refugee Resettlement Program, an agency of Catholic Social Services.

“Having this type of reception is the African way,” Abu said. “It is part of the culture to make sure everyone comes together. Many of these groups worship together as a group. We have the Liberians who meet at the Southwest Philadelphia church, St. Charles Borromeo; the Nigerians who celebrate Mass at St. Cyprian’s; and others are at other archdiocese parishes.

“Under Archbishop Charles Chaput we have the opportunity to pray together and gather to serve God,” Abu said. “We have apostolates throughout the archdiocese. The African Catholic community is always increasing because now we have first, second and third generations of families. This Mass made it possible to bring them together.”

The African Heritage Mass was first commemorated in 2014 at St. Cyprian Church on Cobbs Creek Parkway in West Philadelphia. At earlier African Masses Father Livinus Ugochukwu was the celebrant. The aim then and now was to bring the multilingual and multicultural African Catholics together. 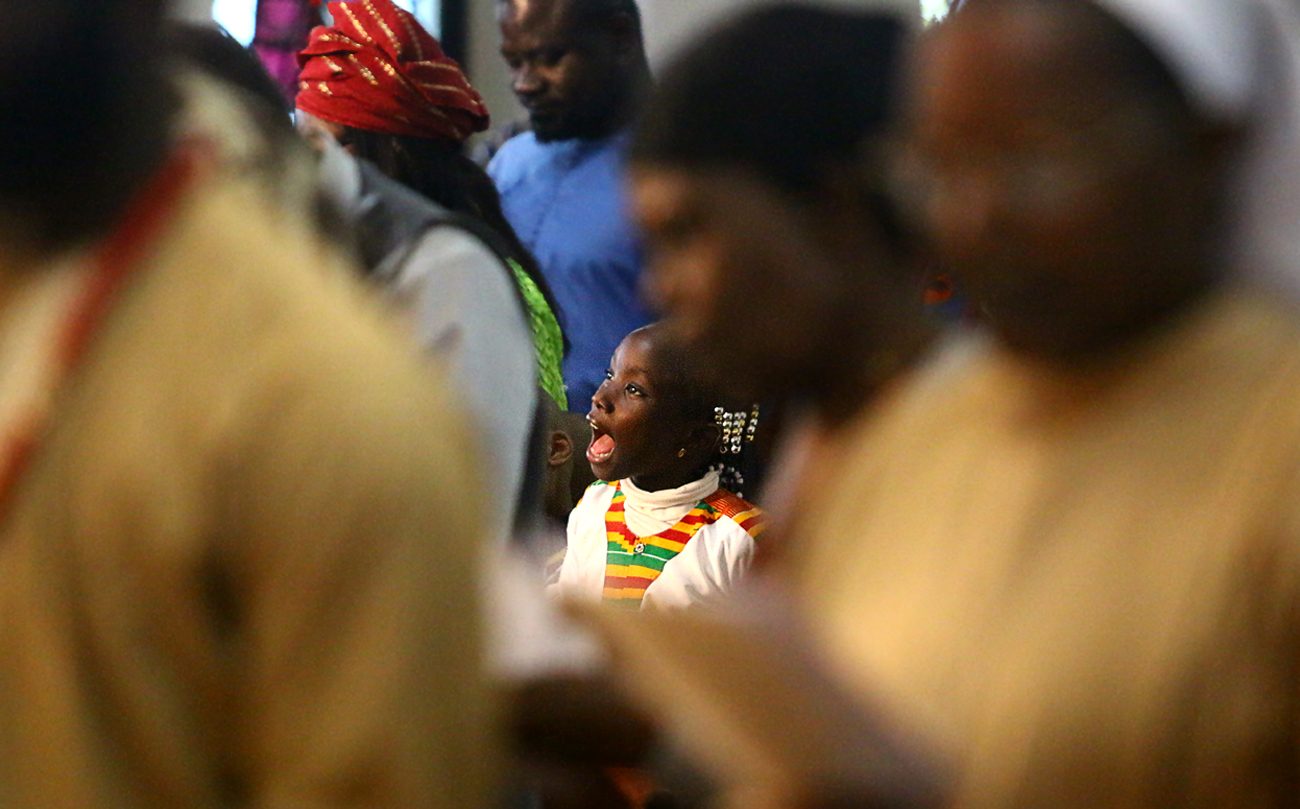