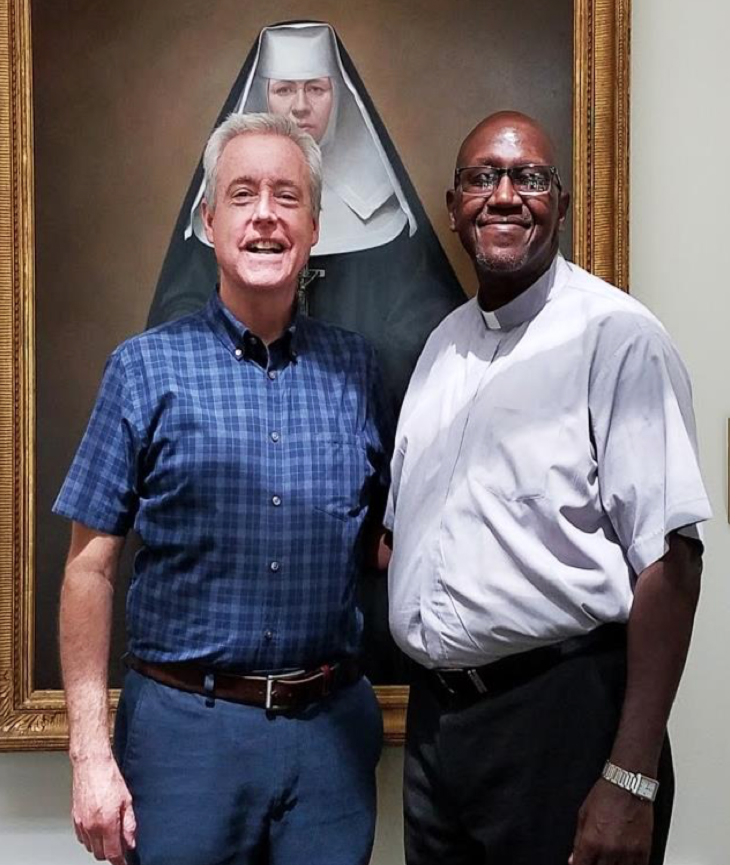 Deacon Anthony Willoughby (right), and Michael Joyce, an aspiring permanent deacon in formation at St. Charles Borromeo Seminary in Wynnewood, stand before a portrait of St. Katharine Drexel at the archdiocesan St. Francis-St. Joseph Homes, where Willoughby is spiritual director. During the summer of 2019, Joyce worked under Willoughby as part of a training program that gives future deacons hands-on experience in the works of charity. (Photo courtesy of Michael Joyce)

When confronted with a teenager who insisted she was an atheist, Michael Joyce didn’t respond with shock, shaming or even Scripture.

Instead, he reached for an egg timer.

“I asked her and her fellow students if they ever sat in quiet for a few minutes and did some thinking,” said Joyce, a member of Queen of the Universe Parish in Levittown who is in his second year of formation for the permanent diaconate at St. Charles Borromeo Seminary in Wynnewood.

As part of his training, Joyce spent several hours this past summer working with students at St. Francis-St. Joseph and St. Vincent Homes in Bensalem. Operated by archdiocesan Catholic Social Services (CSS) and funded in part by the Catholic Charities Appeal, the homes offer residential and educational programs, as well as case management and outpatient clinical services, for more than 100 dependent and delinquent teens.

While at the school, Joyce handed out egg timers, along with copies of a small book on self-reflection, to encourage students to “spend time being aware of God’s presence.”

“I told them, ‘When you have one minute, turn the egg timer over and sit and listen, or talk from your gut,’” said Joyce, who described his summer diaconate service as transformative.

In his role as a writer and producer of Sesame Place theme shows, Joyce said he’s naturally accustomed to seeing the world through kids’ eyes. However, the summer practicum helped him “to put two and two together.”

“It brought everything from my diaconate classroom and my prayer life into one,” he said.

That synthesis is exactly what the program is designed to foster, said Edward Lis, CSS’s director of Catholic mission and identity.

Seven years ago, Lis and permanent Deacon James Owens – who at the time was part of the seminary’s permanent diaconate formation program – began to explore ways of getting future deacons out in the field.

While the men in formation were well-grounded in the permanent diaconate’s ministries of the Word and of the altar, both Lis and Owens felt that the aspiring deacons needed more hands-on training in the ministry of charity. In that capacity, permanent deacons visit the sick, feed the hungry and perform a range of duties that enhance the social well-being of others.

“Before the summer program, we would have them visit a CSS agency and they’d get a two-hour presentation on what we do,” said Lis. “So it was information, but it wasn’t formation.”

Lis and Owens, who had collaborated often over the previous 30 years, teamed up with Deacon Patrick Stokely to develop a three-summer, 36-hour field service program for men who had completed their first year of formation. Most of the assignments fall within the range of outreach ministries offered by CSS, although several other agencies in the archdiocesan area also offer service opportunities.

After each season, the men reflect on their experiences through meetings with mentors and written assignments.

“We wanted an engagement that was pastoral and personal, something that connected them with clients and fellow volunteers,” said Lis. “If a guy is a carpenter or plumber and can do some work at one of our CSS locations, that’s fine, but we didn’t want to make it devoid of personal contact.”

By deepening the men’s involvement in charitable works, the service practicum makes future deacons “more effective spokesmen” for these activities, he observed – giving aspiring deacons a kind of “street cred” in the pulpit.

“They can preach it, because they’ve been exposed to it, and they can say, ‘Let me tell you what I’ve learned,’” said Lis.

More specifically, men who have completed the practicum can raise awareness of the ministries they have served, and of the Catholic Charities Appeal that supports many of them.

Lastly, the interaction with the various archdiocesan human service agencies may lead some to consider working in the field full-time.

“Maybe they’re looking for a career change or a post-retirement gig,” said Lis.

Whether it translates into a more relevant homily or a new profession, the time spent in the field profoundly shapes the men who will one day be ordained as permanent deacons.

“It was eye-opening,” said Joyce. “In the classroom, I stood there thinking, ‘Oh my goodness, it’s all coming together.’”

NEXT: St. Joan of Arc rides again, in Harrowgate