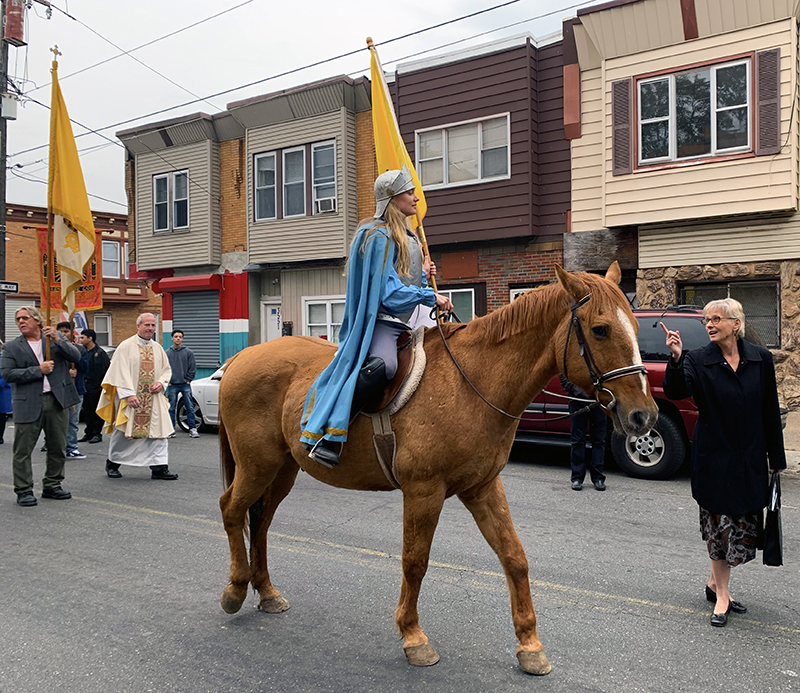 St. Joan of Arc, the 15th century saint who helped France fend off English conquest, rode once again on Oct. 20 – right down Frankford Avenue in the city’s Harrowgate section.

The live reenactment of the saint parading on horseback was part of a 100th anniversary celebration for St. Joan of Arc Church. Located at Frankford Avenue and Atlantic Street, the former parish, which was founded in 1919, became part of Holy Innocents in 2013.

Some 350 current and former parishioners gathered for the Oct. 20 liturgy, which was preceded by a street procession that (in addition to its saintly grand marshal) included banners, bagpipes and Philadelphia Auxiliary Bishop Edward Deliman, who in his homily wished the faith community a “happy birthday.”

Speaking in both English and Spanish, Bishop Deliman called the day a “celebration of church,” both the “holy ground” of the actual building and “more importantly, the temple of living stones” that demonstrates “our God is great, our God is good and our God is here.”

Bishop Deliman described the community’s patron saint as “an example of prayer, fidelity and obedience to God’s will.” Likening her to St. John the Baptist, Bishop Deliman observed that “St. Joan never gave into self-pity or a ‘woe is me’ attitude,” but instead remained “determined in prayer.”

That same tenacity was highlighted by Sister of St. Joseph Linda Lukiewski, who serves as St. Joan of Arc’s evangelization and Hispanic minister. Sister Linda, who spearheaded the anniversary celebration, said the event showed that the church was “here in the battle” amid one of the city’s most challenged and impoverished neighborhoods.

Father Thomas Higgins, pastor of Holy Innocents Parish, commended Sister Linda and the St. Joan community’s pastoral leaders for their “care of the people of the neighborhood.”

Such spiritual and material support is more crucial than ever, said Linda Lesher, who has been a member of St. Joan of Arc for 31 years.

“The need is so, so great here,” said Lesher, who serves as both a catechist and an extraordinary minister of holy Communion. “If we weren’t here, there wouldn’t be any religion in this neighborhood, I believe. Our children know God here through our classes, and we are blessed to be here.”

During the liturgy’s concluding remarks, Sister Linda drew a standing ovation as she rallied the congregation with the cry, “Que viva la Iglesia Católica – long live the Catholic Church!”